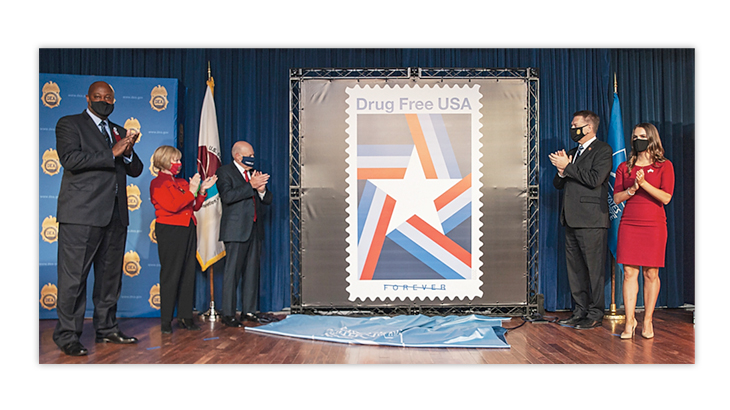 Because of the COVID-19 pandemic, the event was closed to the general public. Most of the attendees were connected with the speakers, and Linn’s Stamp News was the only media outlet present.

The guests in the auditorium were seated apart, with the chairs marked where they could sit.

A ceremony program was produced for the event and handed out to guests when they arrived. A stamp pin was also given out.

The ceremony was streamed live on the U.S. Postal Service’s Facebook page. After the event, the video was posted for all to watch.

Safety of the attendees and speakers seemed at the forefront. I don’t recall seeing anyone without a face mask, and the events team wiped down the podium and replaced the microphone cover multiple times in between speakers.

The event marked a notable first for Postmaster General Louis DeJoy as this was his first time dedicating a new stamp.

“It’s our hope that the Drug Free USA stamp will help publicize the dangers of illicit drug use and to promote drug abuse prevention,” he said during his remarks.

Additional guests at the event displayed the partnerships that exist between multiple organizations: the Postal Inspection Service, the Drug Enforcement Administration, the Postal Service, the National Family Partnership and Miss America.

After the ceremony, guests slowly departed and kept their distance from each other.

There were no retail sales of the stamp or first-day-of-issue postmarking at the event site. Collectors had to visit the Arlington, Va., main post office nearly 3 miles from the event site to obtain stamps and cancellations.

Prior to the ceremony, Linn’s had the exclusive opportunity to interview Timothy Shea, DEA acting administrator. A few of the questions from that interview are provided below.

What do you see as the general public response to this new Drug Free USA stamp?

Well, I think it’s a positive one, especially since it’s occurring during Red Ribbon Week, which is an annual event we’ve been doing since 1985 in honor of the torture and death of Special Agent Enrique Camarena.

And it started in California in his hometown and to bring awareness. It’s the longest-running prevention campaign in American history. And so it’s very important to have that piece of our effort highlighted here. We do a lot of law enforcement at DEA. We do a lot of diversion investigations, but we can’t do it alone at DEA. We need the help of education for our young people and also prevention efforts and treatments.

How do you anticipate using the Drug Free USA stamp for your own personal use?

I think all the personal letters I send out are going to have the stamp on it. I think it’s great branding for the DEA to have a stamp dedicated to drug abuse prevention and awareness. And I think we’re grateful to the Postal Service for doing that.

Based on the participation of all the organizations in this event, and on a common theme, what does the issuance of the stamp mean and symbolize to the nation?

Well, I think it’s symbolic in the design and the way it’s done. It’s a beautiful stamp, and with the white star and the blue and red lines coming out from the sides, I think it symbolizes the unity that we need, the partnerships that we need to really make a difference in drug abuse prevention and treatment. So I think having a stamp like that as the focal point to get the message out is really helpful, great.

It’s outstanding. They’re very important partners with DEA. They do a lot of work with us on a daily basis across the country and around the world. A lot of drugs are unfortunately transported in the mails, and we work with them all the time on this. Every day around the country our agents are working with the Postal Inspection Service. I work with the chief inspector quite a bit as well. So it’s important for us.

January 1 marks the deadline for the Stop Act that the Inspector General stated the Postal Service is not going to be able to implement by that date. Senator Rob Portman of Ohio said USPS is allowing too many drugs to come into the United States by mail from China and Chinese drugmakers, and they’re using the mail as their primary channel to ship illegal drugs into the United States. How is your office assisting the Postal Service in meeting the Stop Act deadlines?

I think we’ve got to look at the facts. And I think you know, we will work with Congress and more on this issue. The biggest threat we have from China right now is not the direct importation of drugs, but the precursor chemicals that are used to make heroin and meth. And those chemicals are going from China to Mexico, and virtually all of the meth and all of the fentanyl in the United States that’s used comes from Mexico. And a lot of that is produced using chemicals from China. So that’s the biggest threat that we have from China right now. I don’t want to downplay the rest of it, the finished product, but I think that we’re trying to work on the precursor chemical problem.