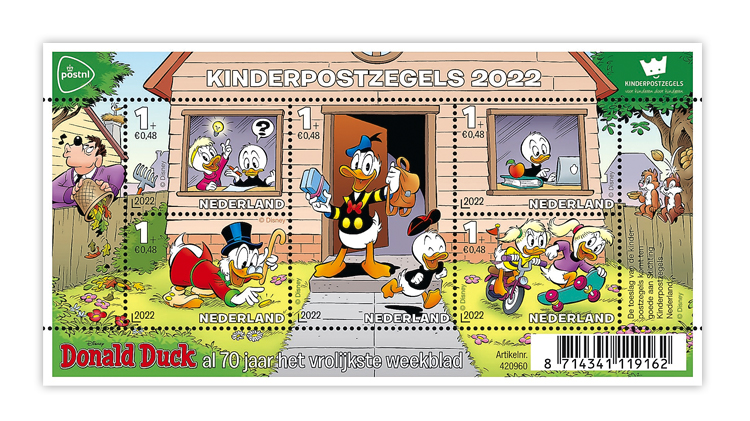 Ferdi Felderhof, editor-in-chief of the magazine, said: “These Children’s Welfare Stamps are truly the icing on our anniversary cake. We are incredibly proud that Donald Duck and his family are appearing on the Children’s Welfare Stamps. There are few magazines for young people that are read by multiple generations. We want these stamps to exude that family feeling and the happiness of children too.”

The stamps show characters who appear in the comic strips in the magazine; Donald stars on the large stamp in the center of the sheet.

Also pictured on the stamps are some of Donald’s relatives, including his uncle Scrooge McDuck; nephews Huey, Dewey and Louie; and nieces April, May and June.

Each stamp is nondenominated, with a “1” for domestic mail and a €0.48 surtax. The proceeds from the surtax are donated to projects of the Foundation for Children’s Welfare Stamps (Stichting Kinderpostzegels Nederland).

Pascal de Smit, director of the foundation, said: “For the first time in the long history of Children’s Welfare Stamps, they feature a true international cartoon hero: Donald Duck. And with a story to boot. We see May help Huey with his homework: children helping children. Louie, April and June go to school without a care in the world: this is the mission we are so passionate about.’