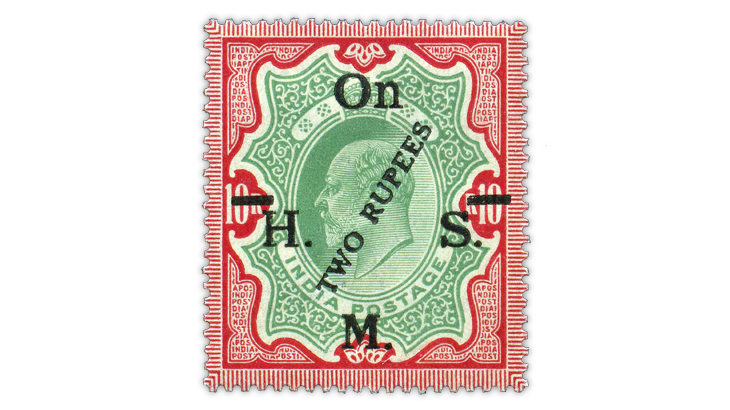 The Republic of India, with about 1.4 billion people, is the world’s second most populous country, after the People’s Republic of China. Based on current trends, it is estimated that India will surpass China in 2023.

While there is still a great deal of poverty in India, since the country abandoned its socialist economic policies in the early 1990s, its economy has become one of the fastest developing in the world. Increased wealth means increased leisure and money for hobbies, such as stamp collecting.

In 1925, India, then the crown jewel of the British Empire, issued a set of three Official stamps (Scott O67-O69) by overprinting and surcharging three of the 1909 King Edward VII Official stamps (O49-O52).

We recently saw an unused, hinged example in very fine grade of the 2-rupee-on-10r stamp (Scott O69) sell in an online auction for $13.50 after spirited bidding by multiple bidders. The Scott Classic Specialized Catalogue of Stamps and Covers 1840-1940 value for the stamp in that grade and condition is $3.50.

Early printings of U.S. 1931 postage due stamps hard to find