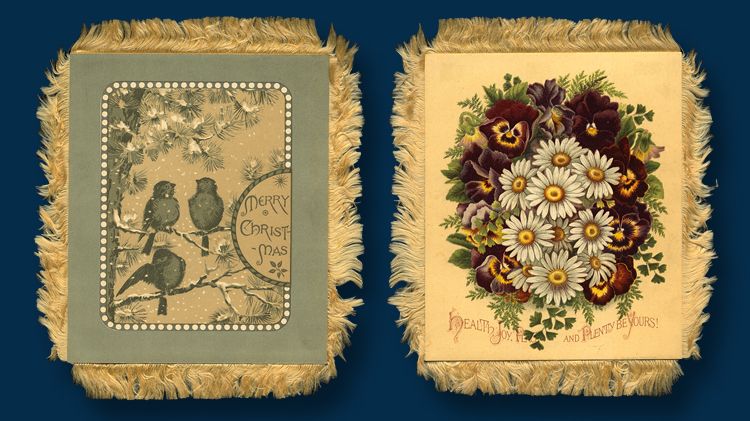 This ornate Christmas card shown here, front and back, was enclosed in an envelope with a December 1882 circular date­stamp. The card does not open. 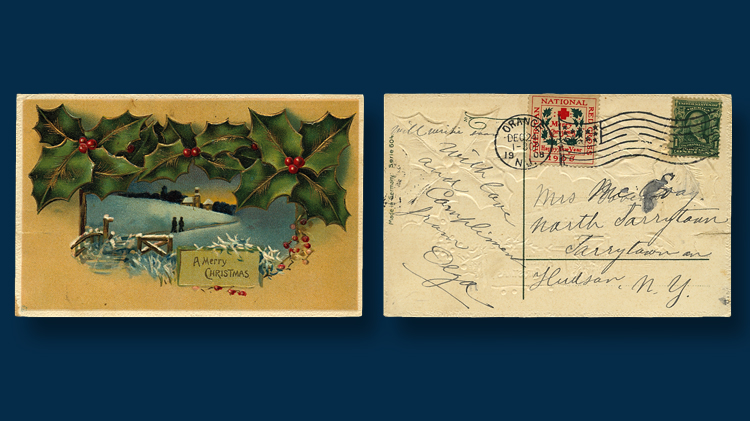 In the early 20th century, Christmas greetings were often sent using specially printed postcards such as this 1908 example. 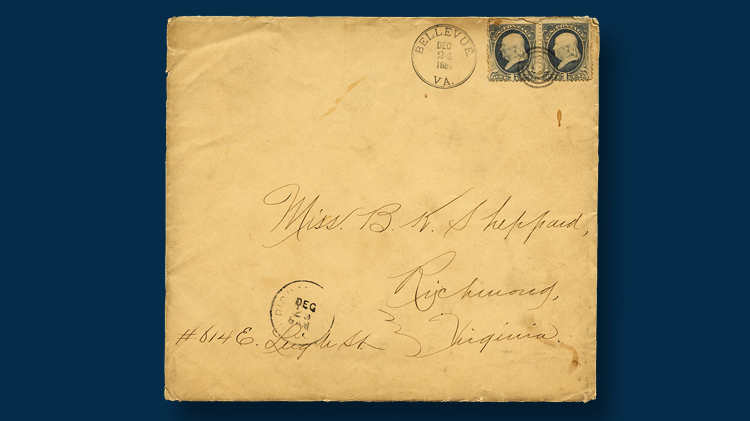 The Christmas card was sent in this oversized envelope with 2¢ postage using two examples of the 1881 version of the 1¢ Franklin stamp.
Previous
Next

As stamp collectors, most of the Christmas cards we see date from around 1907 and onward. And for the first 30 years or so, most of these were postcards with a stamp and a Christmas seal, such as the 1908 example shown with this column.

After that, Christmas cards enclosed in envelopes became the fashion, and Christmas postcards faded away.

Why did this happen? My theory is that cards in envelopes conveyed not just greetings, but the unspoken message that the recipient was worth spending a little more for than just a card and the postage.

I am not being critical of those who are thrifty; I am just looking for an explanation for why the social convention changed.

Christmas greeting cards were introduced in the United States by the firm of Prang and Mayer in 1873. Louis Prang, the owner, is sometimes called “the father of the American Christmas card.”

Despite the fact that Prang’s cards were produced in quantities of more than 5 million by the 1880s, they are seldom seen today. In fact, any Christmas cards from that era are scarce.

So, I was pleased to find the card shown nearby in the stock of British dealer Steven Taylor. It is the earliest American Christmas card I’ve seen. The circular datestamp tying the two stamps to the cover is dated Dec. 24, 1882.

The card does not open. The front shows birds on snow-covered branches and bears the simple message, “Merry Christmas.” The back features an elaborate bouquet of pansies and daffodils with the inscription “Health, Joy, Peace and Plenty by Yours.”

The card is not signed by the printer or artist, but with its silk decoration around the outside and multicolor printing, it must have cost a pretty penny.

However, the cost to mail it was only 2¢, using two of the 1881 redrawn (dark upper corners) 1¢ Franklins (Scott 206) on the oversized envelope.