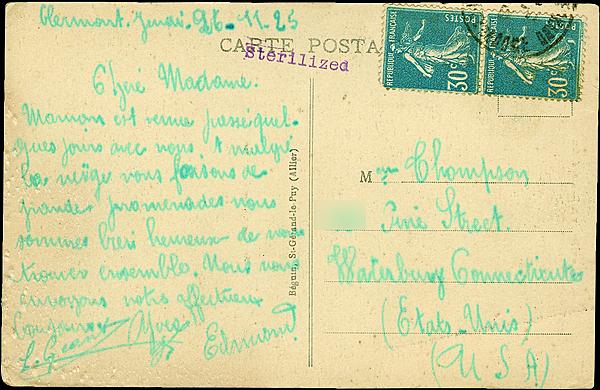 “Sterilized” has been handstamped on both the front and back of this 1925 postcard from France to Connecticut. It is not likely a post office marking, but thoughts about its meaning and where it was applied are being sought by the author. 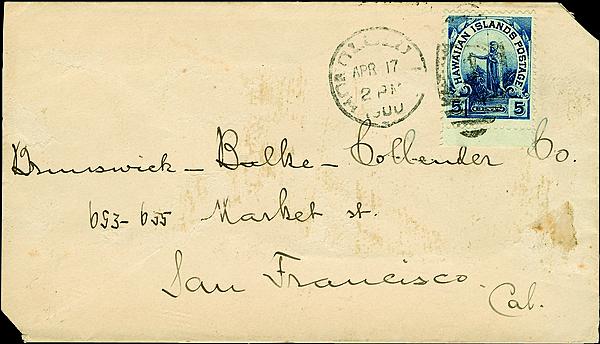 Mail from Honolulu in the period December 1899 to late April 1900 was disinfected for bubonic plague by exposing it to sulphur dioxide via clipped corners, as shown in this cover from April 17, 1900, sent to San Francisco. 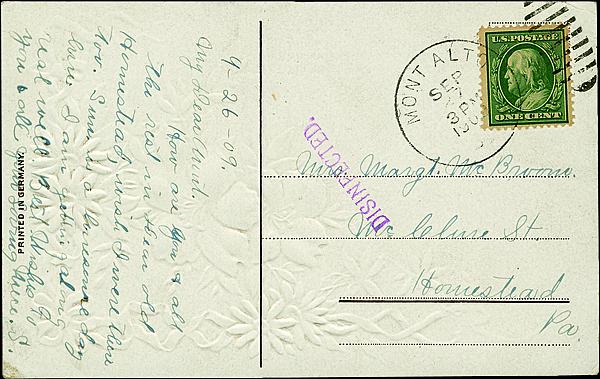 “Disinfected” was the term of choice applied to mail, via a handstamp, that might have been exposed to disease and then treated to eliminate any possibility of infecting the receiver or handler.

The usual means of identifying a piece of United States mail that in the early part of the 20th century had been exposed to disease and then subjected to a disinfecting process is to see a “disinfected” handstamp. Pictured below is a postcard that has the “disinfected” handstamp placed on it near the Sept. 27, 1909, Mont Alto, Pa., postmark.

There is a variant from Honolulu in the time period of December 1899 to late April 1900. That mail was fumigated for bubonic plague through clipped corners, facilitating exposure to sulphur dioxide fumes for three hours.

The Honolulu-origin covers in that time period are often found with opposite corners clipped, as shown at the bottom of this page on the left. This example has a 5¢ Hawaiian stamp postmarked April 17, 1900, in Honolulu and sent to San Francisco. The upper right and lower left corners were clipped.

A new entry in this derby is shown on the right. This postcard from January 1926 was sent from France to Waterbury, Conn., and it bears the word “Sterilized” on both front and back. The address side is shown. There are bumps in the lower right corner of the card, which might indicate the location where disinfectant was applied.

I asked for background on the term “sterilized” in a recent issue of La Catastrophe, journal of the Wreck and Crash Mail Society.

Only one response was received, from a gentleman in the Netherlands, and he was not encouraging, suggesting that the word was struck in the United States but probably not by the post office.

He noted, “It was not uncommon for individuals or organizations in the States to make up such handstamps presumably to reassure staff or customers.”

He may be right, but I feel the need to throw this out to U.S. Notes readers for a second opinion. If you have any thoughts about the postcard, I would appreciate it if you write to me via postal mail at John Hotchner, Box 1125, Falls Church, VA 22041; or by e-mail at jmhstamp@verizon.net.