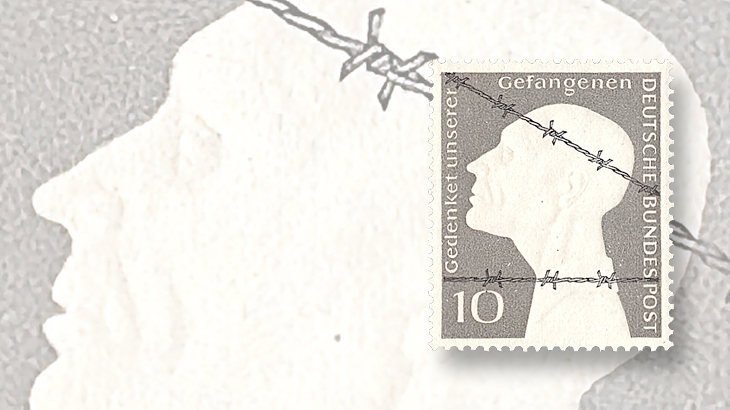 This is the stamp that offended East Germany politically, by honoring captured soldiers who had fought for Nazi Germany in World War II. 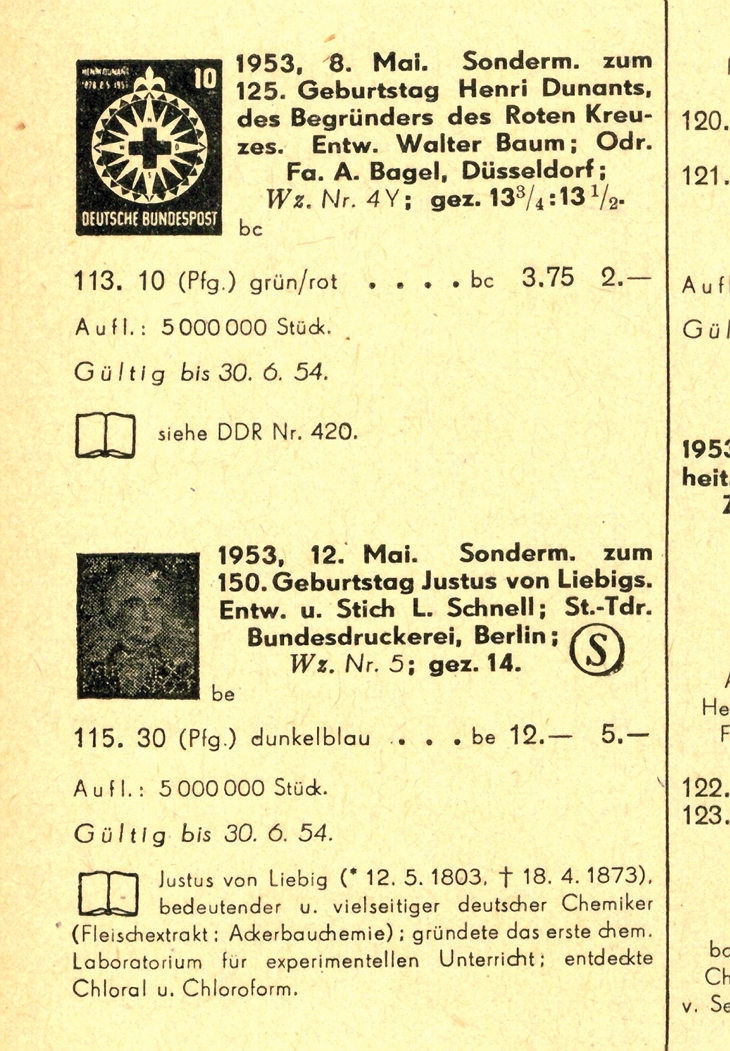 This excerpt from the East German Lipsia Briefmarken Katalog shows listings for West Germany stamps of 1953 issued on May 8 (No. 113) and May 12 (No. 115). The missing stamp, which should have been No. 114, was the banned stamp that honored World War II German POWs, issued May 9. 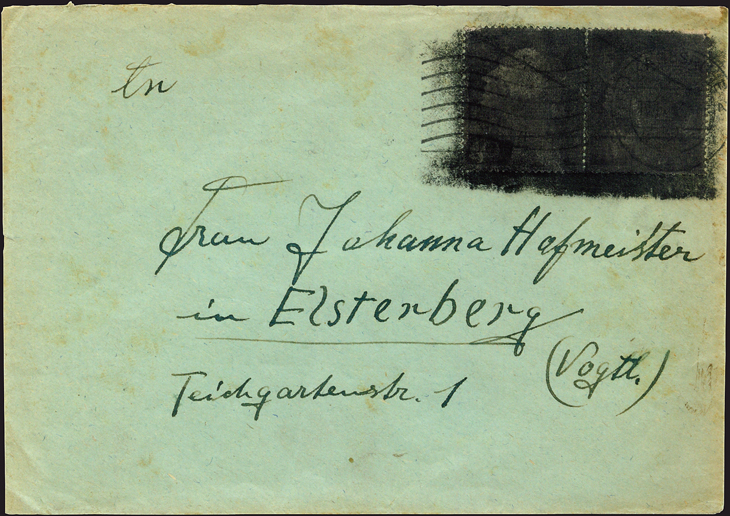 East German postal authorities obliterated the pair of 10pf War Prisoner and Barbed Wire stamps (Germany Scott 697) on this May 19, 1953, cover from Karlsruhe, West Germany, to Elsterberg, East Germany, in protest of the stamp subject. 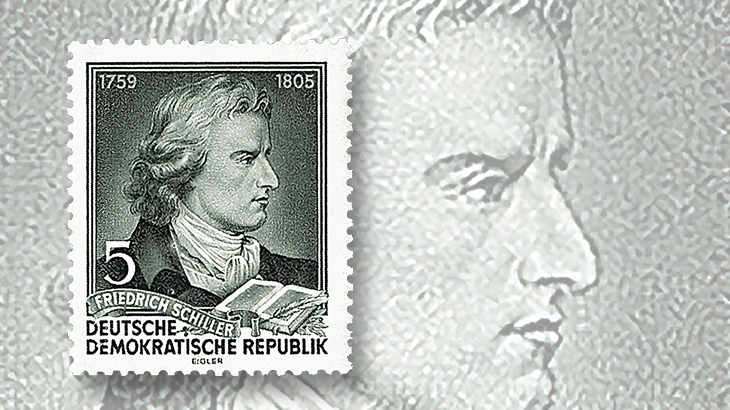 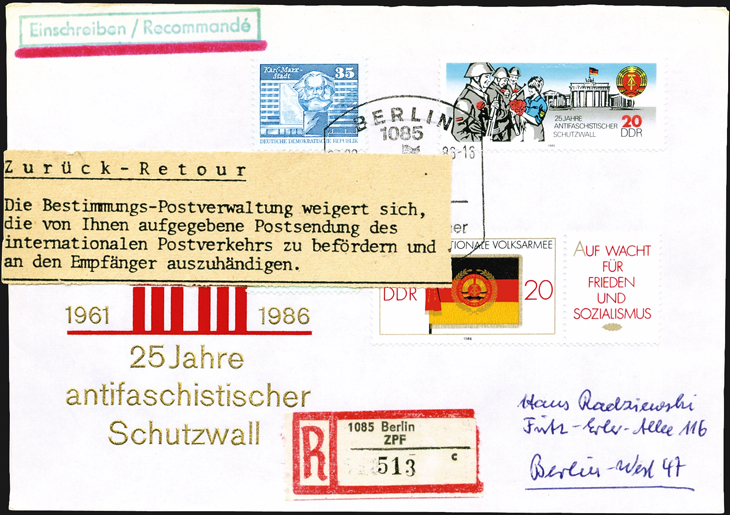 A label taped to this Aug. 5, 1986, registered first day cover of the 20pf stamp that commemorated the 25th anniversary of the Berlin Wall (GRD Scott 2560) informed the sender that the West Berlin postal administration had refused to accept and deliver the letter, which was deemed to display forbidden political propaganda. 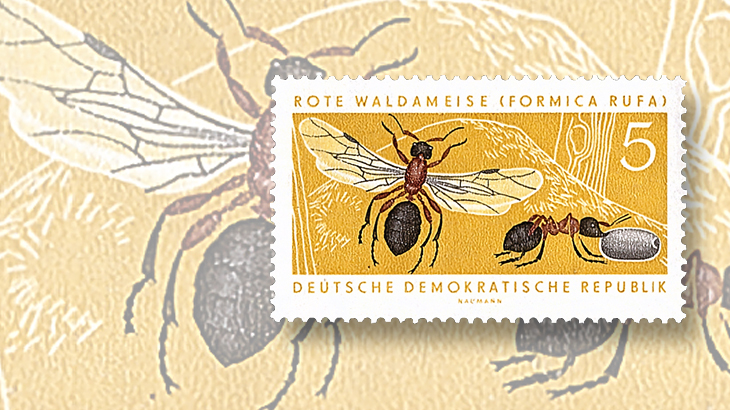 Chad Snee revisited the American Philatelic Society’s 1962-1977 “Black Blot” program in his report about a 1967 Qatar cover franked with gimmicky embossed gold-foil coin-like stamps that once had been disparaged by hobby writers but today are scarce and expensive in commercially used condition.

In reviewing 1960s-70s black-blot prejudices against stamps of certain countries, Snee had quoted my observation that “the largest number of explicitly enumerated banned stamps [were those of] East Germany.”

In a Jan. 11, 2016, page 3 letter to Linn’s, Benjamin R. Beede wrote: “The reason for this [black-blot] treatment was that the sale of an individual stamp in many sets was tightly controlled, or blocked, although Lawrence did not mention this technique.

“Perhaps he or someone else can explain how the system worked and why it was instituted.”

I am happy to oblige, but first I want to frame the discussion in a larger historical context so that the residue of anticommunist Cold War propaganda won’t obscure or exaggerate the policy. I hope we can understand it as a relic of a past political and philatelic era.

Although East Germany’s implementation of its philatelic distribution system was unique, controlled dissemination of special stamp issues for collectors is almost as old as the hobby itself. Let’s consider a few notable precedents.

Historically the United States was among the first countries in the world to issue stamps directed solely to the philatelic trade, and to restrict their distribution.

So-called reprints, reissues, and special printings of 1875 were created as a by-product of a Post Office Department exhibit for the 1876 Centennial Exhibition in Philadelphia, which displayed examples of all current and previously issued U.S. postage stamps.

Having made the decision to manufacture fresh high-quality prints of all those stamps, POD officials offered them for sale to stamp collectors and dealers by special order to department headquarters in Washington, D.C.

Many later U.S. stamps and souvenir sheets issued for international stamp exhibitions had limited distributions; those also have catalog recognition. In more recent times, many U.S. stamps have been “blocked” in the sense that one could not go to a post office and purchase just a single stamp from a set. Examples include multiple-design se-tenant stamps in booklets, plate number coil stamps, and commemorative panes such as the 1994 Legends of the West set, Scott 2869.

Naturally the United States was not the only country that marketed stamps to the philatelic trade and restricted their distribution. Among my favorites are Japanese lottery souvenir sheets. Beginning in 1950 with the dark red 2-yen Tiger stamp (Japan Scott 498) Japan has issued annual New Year souvenir sheets containing identical designs as post office stamps, postally valid at face value but distributed only to winners of a lottery, not sold at any post office.

The Scott catalog does not list the lottery-prize souvenir sheets, but does report them in footnotes, and assigns values that do not specify unused or used condition. More recently other countries on the Asian mainland have adopted this Japanese tradition.

What’s significant here is that the APS never black-blotted Japanese lottery souvenir sheets even though their availability was more restricted than nearly all the stamps the society did condemn. Evidently some foreign collecting cultures merited greater respect from the APS than others. To me that reflected a flagrant double standard.

The Scott catalog is inconsistent in its policy for listing restricted issues. All the U.S. 1875 special printings are listed even though the reprints of the 1847 and 1851-57 designs were not valid as postage in 1875 because those series had been demonetized in 1861.

While Scott does not recognize the Japanese lottery-prize souvenir sheets, it does list, for example, the 1982 10-franc Marianne souvenir sheet of France (France Scott 1821) even though, as a footnote states, the item was “Sold only with 20fr show admission ticket.” I personally took offense that I had to pay 30 francs for every 10f souvenir sheet I purchased.

Let us keep those examples in mind as we take up Beede’s question about the so-called blocked values of East Germany — Sperrvert to German collectors.

A headnote above German Democratic Republic Scott 241 reads, “Starting with the 1955 issues, commemoratives which are valued in italics were sold on a restricted basis.” The set that follows immediately below the note is a three-design set honoring Friedrich von Schiller (1759-1805), the Leipzig man of letters. In unused condition, the 5-pfennig stamp is valued at $2.75; the 10pf and the 20pf, each at 60¢. An imperforate souvenir sheet featuring all three denominations has a catalog value of $22 unused.

The catalog values for the 5pf stamp and the 35pf souvenir sheet are in italics. They were East Germany’s original blocked values. Compared to the other two stamps in the set they are less common but not scarce. The quantities issued were 5pf, 750,000; 10pf and 20pf, 3,000,000; souvenir sheet, 750,000 — differences that would not ordinarily seem to support 60 years of Sturm und Drang (storm and stress). Yet Beede’s challenge suggests that the concern still smarts in some quarters.

In that set, the 5pf Red Ants stamp was the blocked value. The other denominations were freely available for purchase in any quantity at face value, by anyone, at any East German post office or by mail, yet the APS black-blotted the entire set. A headnote in the APS booklet Black Blot 1962-1977 stated, “All sets containing a ‘blocked value’ are assessed a Black Blot.”

About 30 years ago I interviewed Peter Fischer, who edited the East German stamp hobby magazine Sammler Express, at the writers’ union hall in East Berlin. Fischer was also the senior editor of the specialized DDR Universalkatalog of East Germany stamps and postal stationery, which included the postwar Soviet occupation zone of Germany. My American friend Victor Grossman, a resident of East Berlin, was our interpreter.

Fisher told me that the Sperrvert idea originated among East German stamp clubs. Collectors in every country hope and expect that some stamps will be scarcer and more challenging to collect, but in a divided country at the Cold War frontier, the postal administration faced unusual problems. From 1948 to 1961, with an open border between East and West Berlin, speculators from the West occasionally tried to corner the market on selected East Germany stamp issues by buying huge quantities and hoarding them as soon as they were issued, creating artificial scarcity.

Worse, according to Fischer, the speculators forced East German collectors who had failed to act quickly to pay high premiums for some of their own country’s new issues. Regulating distribution solved those problems. The great majority of stamps were issued in sufficiently large numbers that speculators could not make mischief with them. Meanwhile distribution of the so-called blocked values was restricted in two ways.

To prevent speculation, they were sold only in complete sets. Every East German collector could subscribe by mail to the new-issue service for up to two of every new stamp (one for his collection, the other to trade) at face value. Post offices were permitted to sell one set per customer. By enlisting family members and friends, industrious collectors could accumulate quantities, but not large enough hoards to support speculation. Stamp dealers qualified for larger quotas, but always in full sets purchased at face value.

East German collectors could trade stamps with foreign collectors, but the trades were monitored by stamp clubs and were required to be equal-value exchanges based on valuations in the multi-volume loose-leaf Lipsia Briefmarken Katalog. A happy benefit of that system was that Lipsia listed and valued every postage stamp issued by every country in the world (with certain exceptions noted below). Cash transactions were forbidden.

Foreign dealers could purchase all East Germany stamps at face value from the export agency in Leipzig, but only with Western currency. There were no limits on quantities of blocked values, but the restricted denominations could be acquired only by purchasing complete sets.

Those regulations eliminated nearly all speculation in new stamp issues. Western dealers condemned the rules as unfair restraints on business, which was precisely their purpose. At bottom the dispute was ideological, not philatelic, which should have been good reason for the APS not to have intervened.

Meanwhile the East German postal authorities literally blacked out politically forbidden stamps from the West, as the May 19, 1953, cover from Karlsruhe in the West to Elsterberg in the East illustrates. The pair of obliterated 10pf War Prisoner and Barbed Wire stamps honored soldiers who had fought for Nazi Germany in World War II, some of whom had not yet been released by the Soviet Union. (The great majority had returned home by 1950, but some remained captive as late as 1956.)

The Lipsia catalog also omitted forbidden issues, but conspicuously reserved their identifying numbers as though in anticipation of eventually being listed after the Cold War had thawed. For its part, the West Berlin post office went one better by refusing to accept and deliver mail that it deemed to bear East German political propaganda, such as the illustrated Aug. 5, 1986, East Germany registered first-day cover for a 20pf stamp that commemorated the 25th anniversary of the Berlin Wall.

Both covers are listed in the 231-page 2011 seventh edition of the bilingual Postkrieg-Spezialkatalog 1870-2008 - Catalogue of Postal War 1870-2008 by Jan Heijs. Banning stamps and mail for political reasons has a long history. I collect these stamps and covers as postal and historical evidence of conflicts among nations. But I think it was wrong for the APS to obfuscate its politically motivated Black Blot listings beneath contrived philatelic criteria.

A quarter century has passed since East Germany, West Germany, and West Berlin reunified on essentially Western terms. I have the impression that stamps, postal stationery, and covers of the former German Democratic Republic are more popular throughout Germany today than ever before, and in this country too. I haven’t met anyone in recent years who declines to collect them because of Black Blots or blocked values.