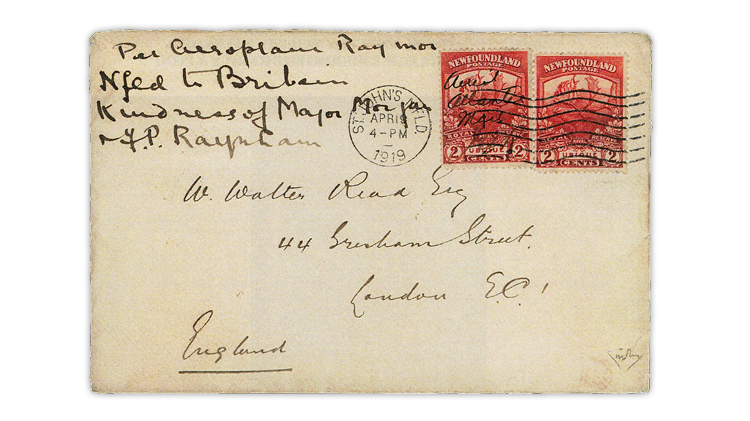 Last sold in 2003, this pioneer flight cover from the April 1919 attempt of the Martinsyde Raymore is uniquely franked with two of Newfoundland’s 2¢ carmine red stamps, including one with the manuscript “Aerial Atlantic Mail JAR.” The cover will be offere

Both auctions offer a substantial number of British North America classic rarities, but it is a 1919 airmail cover from Newfoundland that is featured on the cover of the Highlands collection catalog.

Known as the Martinsyde cover (for the aircraft that carried it aloft), it is franked with two examples of the 2¢ carmine red Caribou stamp. The stamp at left has the manuscript “Aerial Atlantic Mail” and “JAR” initials that characterize the rare 2¢ variety identified as unique in the Scott Classic Specialized Catalogue of Stamps and Covers.

The cover last sold in 2003, and Eastern quotes the auction description from that Harmers of London sale, “A famous and unique envelope which has been described as the greatest rarity in Newfoundland Air Mails.”

Expertized by Enzo Diena in 1988, the cover is offered with an estimate of $100,000-plus in Canadian dollars, which in late January converted to roughly $74,875 in United States dollars.

The lots for both auctions can be viewed online at www.easternauctions.com, with online bidding options available.