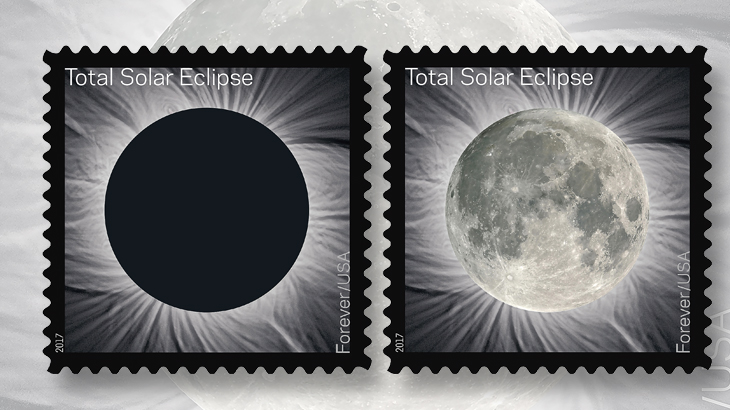 Shown is a view of a single stamp as seen normally (left) and when warmed by human touch (right). The U.S. forever stamp will be issued June 20 to commemorate the total solar eclipse that will take place Aug. 21.

The United States Postal Service will issue its first stamp with thermochromic ink on June 20, to commemorate the upcoming Aug. 21 total solar eclipse, which will be visible across part of the United States.

The nondenominated (49¢) forever stamp will show a total solar eclipse using a photograph by astrophysicist Fred Espenak of an eclipse seen from Jalu, Libya, on March 29, 2006.

The application of thermochromic ink on the black disk in the center of the design allows it to transform into an image of the Moon when warmed by the body heat of a human touch.

The image reverts back to the solid dark disk once the stamp cools.

“A total eclipse of the Sun occurs when the Moon completely blocks the visible solar disk from view, casting a shadow on Earth,” the Postal Service noted in an April 27 press release. “The 70-mile-wide shadow path of the [Aug. 21] eclipse, known as the path of totality, will traverse the country diagonally, appearing first in Oregon (mid-morning local time) and exiting some 2,500 miles east and 90 minutes later off the coast of South Carolina (mid-afternoon local time).”

A map of the Aug. 21 eclipse path will be printed on the reverse of the stamp pane.

“A total solar eclipse provides us with the only chance to see the Sun’s corona — its extended outer atmosphere — without specialized instruments,” the Postal Service said. “During the total phase of an eclipse the corona appears as a gossamer white halo around the black disk of the Moon, resembling the petals of a flower reaching out into space.”

Individuals outside the path of totality experience a partial solar eclipse. Because looking at the sun causes permanent irreversible eye damage, including blindness, specialized viewing equipment and precautions are essential.

The stamp will be welcomed with a first-day ceremony at 1:30 p.m. on June 20 at the University of Wyoming Art Museum in Laramie, in association with the university’s celebration of the summer solstice.

“Prior to the event, visitors are encouraged to arrive at 11:30 a.m. to witness a unique architectural feature where a single beam of sunlight shines on a silver dollar embedded in the floor, which occurs at noon on the summer solstice in the UW Art Museum’s Rotunda Gallery,” the Postal Service added.

A $1 pentagon-shaped stamp showing a photograph of a solar eclipse with corona (taken from a satellite) was issued July 11, 2000, in the Exploring the Solar System souvenir sheet (Scott 3410a).