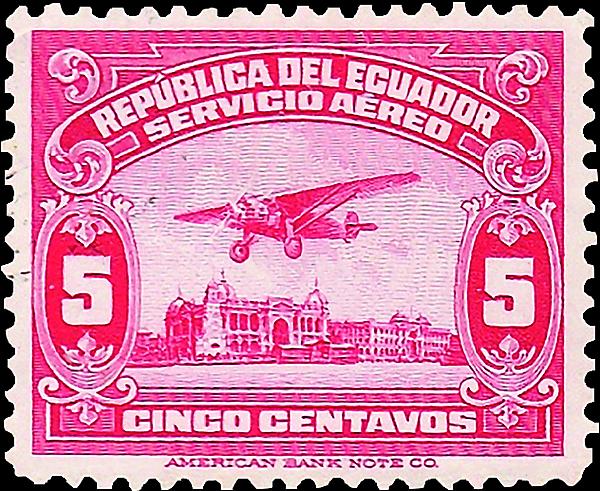 All eight of Ecuador’s first airmail stamps, issued in 1929, used the same design: an airplane over the Guayas River.

In May 1929 Ecuador issued a series of eight airmail stamps (Scott C8-C15). Shown here is the second of the issues, a 5-centavo stamp depicting (as all the denominations do) an aircraft flying over the River Guayas.

The odd thing about these stamps is that they were valid for ordinary mail as well as for airmail.

Why? That is a good question, but I have a good guess (though it is only a guess).

This unusual postal decision meant that airmail stamps could be used and were used on surface mail as well as on airmail. Indeed, this usage must have been expected, since the 2c stamp by itself paid only the printed-matter rate.

By allowing both surface and air usage, Ecuador ensured that the public would buy and use the new stamps, even if the new airmail routes were not immediate successes.

As the Scott Classic Specialized Catalogue of Stamps & Covers 1840-1940 notes, “The stamps were available for all forms of postal service and were largely used for franking ordinary letters.”

The stamps were printed by the American Bank Note Co. and issued May 5, 1929, in plenty of time for the first departures of international airmail via Pan American/Grace Airways (also known as Panagra) on May 18.

The stamps depict a single-wing airplane flying over the Guayas River, which flows by the city of Guayaquil.

ABNC artists employed the same concept for the 1930 airmails of Panama and the 1934 airmails of Costa Rica, and those stamps are not very different from the contemporary airmails that ABNC printed for Honduras. The shapes and details are different but the “airplane over … ” concept is the same.

The lower denomination stamps of this series are quite common. One million each of the 2c, 5c and 20c stamps were printed, and five million were printed of the 10c denomination, which paid both the domestic and the Americas letter rate for surface mail.