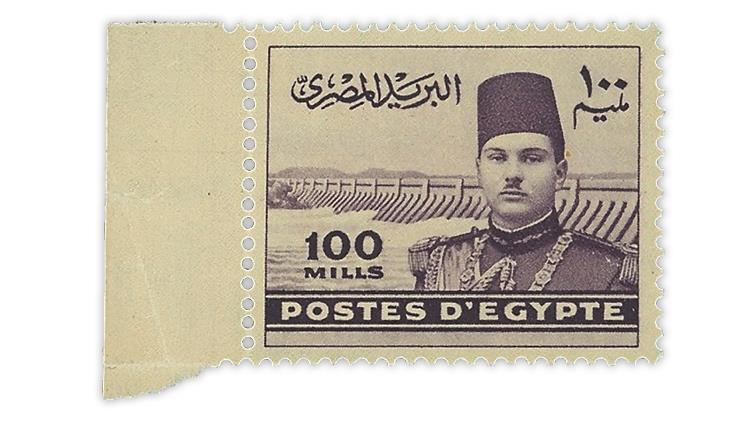 David Feldman’s Dec. 13-16 autumn auction series opens with nice selections of stamps and covers from Egypt. One of the more unusual items is this 1939 100-millieme brown violet King Farouk stamp printed on the gummed side of the paper. 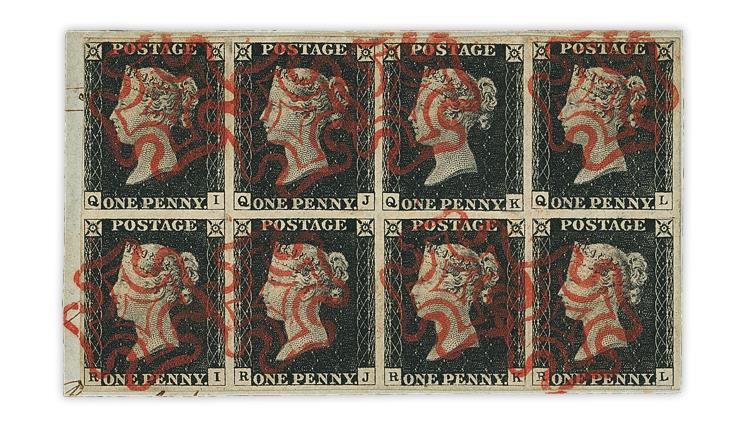 This used block of eight of Great Britain’s 1840 Penny Black, once a part of the famed Maurice Burrus collection, will be up for bids during the final day of Feldman’s December auction series. Feldman describes the block as a “sensational exhibition showp
Previous
Next

David Feldman will offer a plethora of desirable worldwide stamps and postal history during its autumn auction series to be held Dec. 13-16 at its gallery in Geneva, Switzerland.

The series opens with 268 lots of stamps and covers from Egypt. Included in this selection is the Joe Chalhoub collection of Egypt.

More than 750 lots of France and colonies and almost 400 lots of Persia and Bushire will be up for bids Dec. 14. Offerings from Europe and worldwide stamps and collections (approximately 1,000 lots) will cross the auction block Dec. 15.

On the final day of the series, Dec. 16, collectors will have the opportunity to bid on almost 300 lots of Great Britain and close to 800 lots of stamps and covers from the British Empire.

Bidders, regardless of budget, are sure to find something of interest for their collections.

The various King Farouk issues of Egypt are affordable and offer many collecting opportunities. One of the more unusual King Farouk items in the Dec. 14 Feldman sale is a mint, never-hinged 100-millieme brown violet (Scott 237) printed on the gummed side of the paper in error. The stamp has attached selvage at left and what Feldman describes as very fine centering.

For context, a normal mint example of the 100m brown violet King Farouk is valued at $1.40 in the Scott Standard Postage Stamp Catalogue.

Among the selections from France is an eye-catching cover sent Nov. 15, 1853, from Paris to Santiago, Chile via Panama and franked with a pair of the 1852 10-centime bister yellow President Louis Napoleon stamp (Yvert et Tellier 9) and a strip of four of the 1853 1-franc carmine Emperor Napoleon III (18). Both multiples are barely tied to the cover.

Feldman notes that the 4fr, 20c franking satisfied the postage rate (“2nd step of the tariff at 2f10”) for a double-weight letter.

The cover has been signed by noted experts Jean-Francois Baudot and Roger Calves and is accompanied by a 2021 Christian Calves expertizing certificate, according to Feldman.

A color error from Spain, the 1851 5-real red brown (instead of rose) Queen Isabella II (Scott 9a), will be up for bids during the Dec. 15 sale of stamps and covers from Europe.

Feldman describes the stamp as having “good to large even margins, with traces of ‘Arana’ cancel which has been removed.”

The error is listed but not valued used in the Scott Classic Specialized Catalogue of Stamps and Covers 1840-1940 because not enough market data is available to establish a usable catalog value. This is indicated by a dash in the value column.

Accompanying the stamp is a 1976 Comex certificate that states the stamp originally came from a block of four.

A spectacular used block of eight of Great Britain’s 1840 Penny Black (Scott 1), the world’s first adhesive postage stamp, is among the highlights of the Dec. 16 sale of Great Britain and the British Empire.

Feldman states the block is on piece, with each stamp “cancelled by a superb perfectly struck scarlet-vermilion Maltese Cross.” The crisp, clear strikes suggest that the clerk carefully reinked the handstamp before applying each one. One is left to wonder what the intact cover used to look like.

Feldman called the block a “sensational exhibition showpiece” and said that it is widely regarded as the finest used Penny Black multiple from any plate.

Seven separate catalogs were prepared for the Dec. 13-16 autumn auction series and are available for viewing and download on the Feldman website. To access the catalogs, click on “Auctions” on the home page and select “Upcoming Auctions” from the drop-down menu.