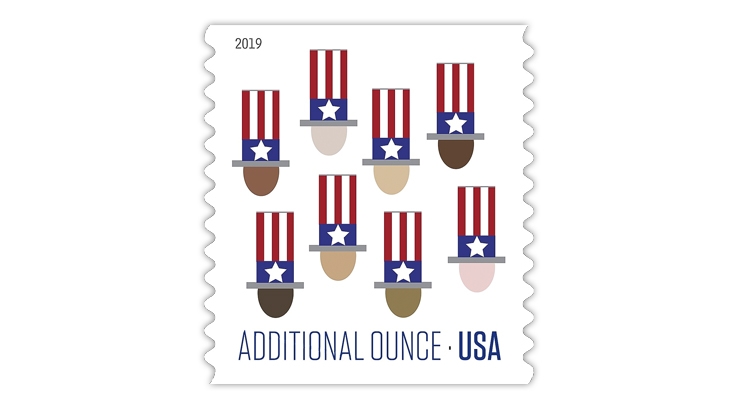 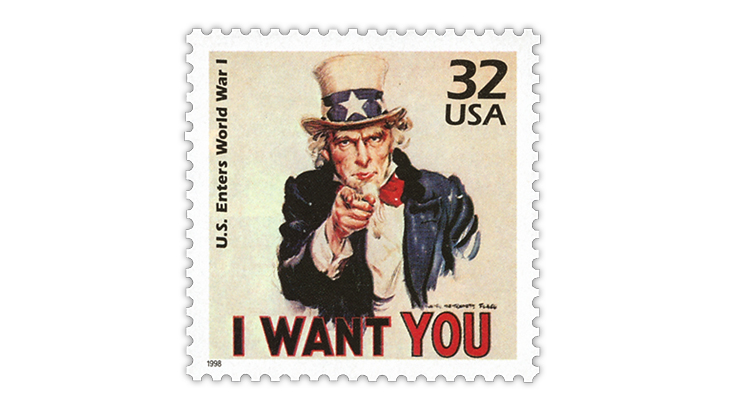 The traditional view of Uncle Sam as a representation of the United States was cemented in American culture with the World War I recruiting poster commemorated on this 32¢ stamp from the Celebrate the Century series. 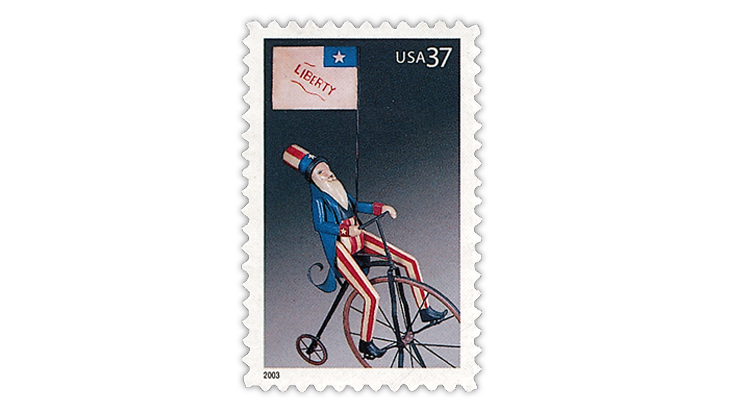 A whimsical version of Uncle Sam is found in the form of this folk art piece made of cast iron and oak trim. The 37¢ stamp was in the 2003 Old Glory booklet designed by Richard Sheaff.
Previous
Next

If you think the latest United States coil stamp looks familiar, there’s a good reason for that.

The new stamp is being issued in a coil of 100 on Jan. 27 as part of the Sunday landslide of new issues accompanying postage rate changes that go into effect the same day.

For the additional-ounce rate, that change is actually a reduction, and a significant one at that.

The Postal Service previously charged an additional 21¢ per ounce for each ounce over  the 1 ounce that a regular letter weighs, up to 3.5 ounces.

That add-on fee drops to 15¢ for this rate change, which means all previous U.S. stamps inscribed “additional ounce,” including the 2017 Uncle Sam’s Hat stamp, are losing nearly 30 percent of their postage value.

There is no first-day ceremony planned for the new stamp, which for first-day-cancel purposes will be officially issued in Kansas City, Mo.

Using the Postal Service’s promotional artwork as a guide, the new stamp varies from the 2017 issue in two easily identifiable ways: The coil has straight die cuts at top and bottom, as opposed to the wavy line die cuts on all four sides of the earlier issue, and a 2019 year date appears in the upper left corner of the new coil, while the sheet stamp shows a 2017 year date reading up in the lower left corner.

As a coil stamp, the new issue will have a small plate number printed on every 31st stamp in the roll, presumably beneath the text near the bottom that reads “Additional ounce USA.”

“The stamp features eight graphic top hats in Uncle Sam’s signature style,” according to the Postal Service, “with red and white vertical stripes above a blue band with a white star and a gray brim.

“Beneath each hat is an oval shape representing a face, each in a different shade, meant to suggest the ethnic and racial diversity of the United States.”

The figure of Uncle Sam as a symbol of the United States traces back to an actual American businessman, Sam Wilson of Troy, N.Y.

Wilson supplied canned meat for troops during the War of 1812, and the soldiers began referring to it as Uncle Sam’s meat after noting the “U.S.” markings on the product.

“By the 1830s, the character began appearing in cartoons and advertisements,” according to the Postal Service.

A famous World War I poster seeking military recruits reprints the most famous illustration of Uncle Sam as interpreted by artist James Montgomery Flagg. The solemn icon is shown pointing his finger at the viewer, along with bold text that conveys his imperative message: “I want you for U.S. Army.”

An Old Glory booklet of 37¢ stamps issued in 2003 includes one stamp depicting a work of 20th-century folk art that has Uncle Sam pedaling a high-wheel bicycle and carrying a Liberty flag (Scott 3776).