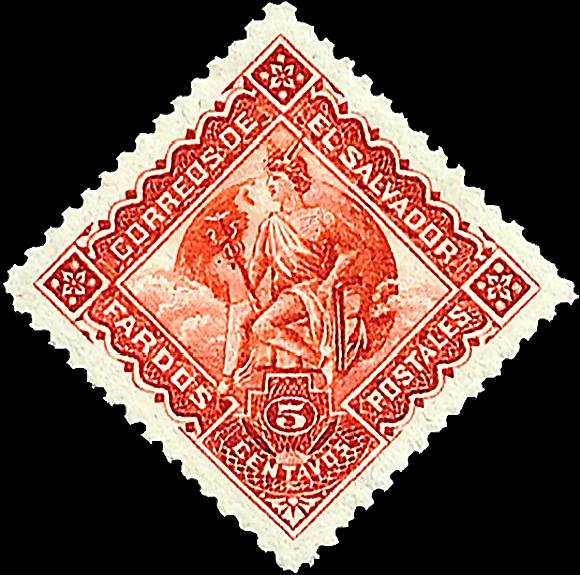 The El Salvador 1895 set of five Mercury parcel post stamps (Scott Q1-Q5) is an attractive set and a good buy at the 2014 Scott Classic Specialized Catalogue of Stamps and Covers 1840-1940 value of just $2.25 in unused hinged condition.

El Salvador— After decades of relative quiescence, the market for Latin American stamps is steadily becoming one of the most active. Collectors are actively seeking out and buying stamps from most periods of almost all Latin American countries.

The Central American nation of El Salvador is a good example. I especially like the 1895 set of five Mercury parcel post stamps (Scott Q1-Q5). The stamps are diamond shaped, colorful and beautifully engraved with an attractive mythological design.

The 2014 Scott Classic Specialized Catalogue of Stamps and Covers 1840-1940 values the set in unused hinged condition at just $2.25. The set is not valued in used condition. The stamps are probably extremely uncommon on cover or on parcel front or piece.

I think this set is a great and fun buy at the 2014 Scott Classic specialized catalog value. For a little extra challenge, look for it in mint never-hinged condition and be willing to pay a small premium for it.

Many are large and colorful, and most have intricately engraved designs that feature popular, arcane or even bizarre subjects.

From a historical perspective, these stamps helped to fund the Union victory in the Civil War. Under the Revenue Act of 1862, taxes were levied on boxes of matches, perfumes, proprietary medicines and playing cards. Under this act, manufacturers who were willing to have the dies engraved and plates made at their expense received a 5 percent to 10 percent discount on their taxes. And by designing their own tax stamps, they could devise stamps that advertised and drew attention to their products while paying the tax.

Some of these match and medicine stamps are prohibitively expensive, but many are surprisingly affordable.

A good example is the Centaur Co. 2¢ Centaur Liniment revenue stamp on paper watermarked single-line “USIR” (Scott RS51d). This stamp is valued at just $4 in the 2014 Scott Specialized Catalogue of United States Stamps and Covers.

How could you pass it up if you saw it offered at that price? The design communicates the idea that the liniment is suitable to both men and horses, and it is of interest to collectors of mythology on stamps.

On match and medicine stamp condition, the Scott U.S. specialized catalog says, “These stamps were usually torn in opening the box or container. Values quoted are for examples which are somewhat faulty but reasonably attractive, with the faults usually not readily apparent on the face.” — H.G.