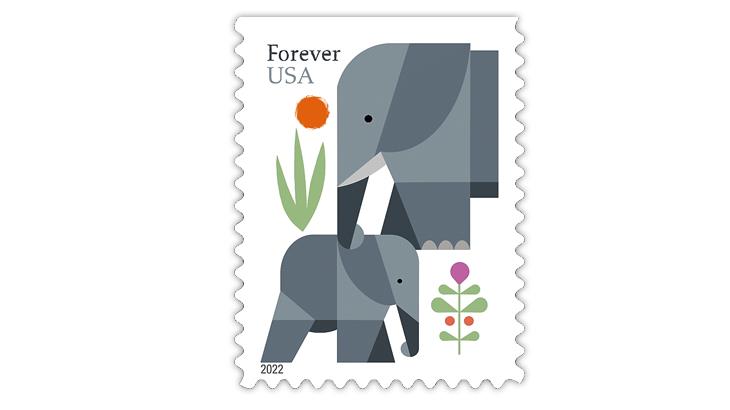 The Elephant Discovery Center, part of the Elephant Sanctuary in Tennessee, will play host to the Aug. 12 first-day ceremony for the Elephants commemorative forever stamp to be issued by the United States Postal Service in double-sided panes of 20. 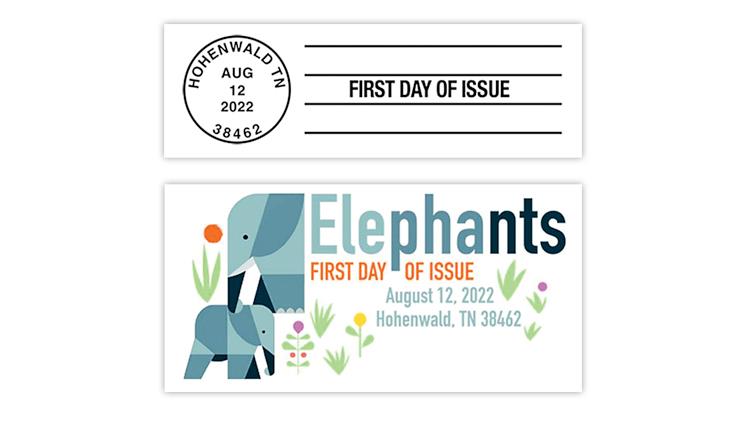 The U.S. Postal Service is offering a pair of first-day postmarks for the new Elephants stamp. The full color postmark shows a slightly cropped version of the two elephants and plants depicted on the stamp.
Previous
Next

On Aug. 12, World Elephant Day, the United States Postal Service will issue a stamp celebrating one of the world’s most recognizable land animals.

The nondenominated (60¢) Elephants commemorative forever stamp will be issued in double-sided panes of 20 in a quantity of 175 million stamps. Double-sided panes are easily folded into a smaller size by removing the selvage strips between blocks of stamps on both sides of the pane. However, collectors prefer to keep double-sided panes intact.

A first-day ceremony is scheduled for 11 a.m. Central Daylight Time at the Elephant Discovery Center, 27 E. Main St., in Hohenwald, Tenn. The center is part of the Elephant Sanctuary in Tennessee, which gives refuge to elephants that have been retired from circuses and zoos.

The sanctuary, according to its website, “exists to provide captive elephants with individualized care, the companionship of a herd, and the opportunity to live out their lives in a safe haven dedicated to their well-being.”

Educating the public about the complex needs of captive elephants and the crisis confronting wild elephants is also a primary focus of the sanctuary.

Jeffery A. Adams, vice president of corporate communications for the USPS, will serve as the dedicating official at the first-day ceremony.

Collectors desiring to attend the ceremony are encouraged to register online with the Postal Service.

“Personifying prehistoric beauty, theological relevance, and environmental importance, one of Earth’s most magnificent creatures will be honored Aug. 12 for World Elephant Day,” the Postal Service said.

“It is a day when organizations and individuals can rally together to give a voice to the issues threatening elephants.”

“World Elephant Day is a rallying call for people to support organizations that are working to stop the illegal poaching and trade of elephant ivory and other wildlife products, protect wild elephant habitat, and provide sanctuaries and alternative habitats for domestic elephants to live freely,” Sims is quoted as saying on the World Elephant Day website.

The website says that the annual observance’s “vision of the ‘neutral’ approach allows and facilitates all organizations and citizens to conduct campaigns under the auspices of World Elephant Day, permitting everyone to work together to support this critical global issue which demands cooperation across borders and political lines.”

The new Elephants stamp features Rafael Lopez’s charming illustration of an African elephant and its young calf. His minimalist design, which incorporates a vibrant orange sun and two stylized plants, lets the pair of pachyderms stand out against the white background.

Each elephant is shown as a grouping of various angular and curved geometric shapes in black and three shades of gray, while the plants are rendered in hues of green, orange and purple.

“Forever USA” is printed in two lines in the top left corner, and a small “2022” year date appears just below the back right leg of the calf.

Elephants are a popular topical subject, as evidenced by the American Topical Association’s Animals-Elephants checklist, which contains 1,313 stamps as of mid-July. Members of the ATA enjoy many benefits, including Topical Time, the association’s official journal that is published six times a year. To learn more and become a member, visit the ATA website.