Elusive Great Britain Official perfins, ‘The Spirit of the Nation’ cinderella, faraway islands and their stamps: Inside Linn’s Stamp News 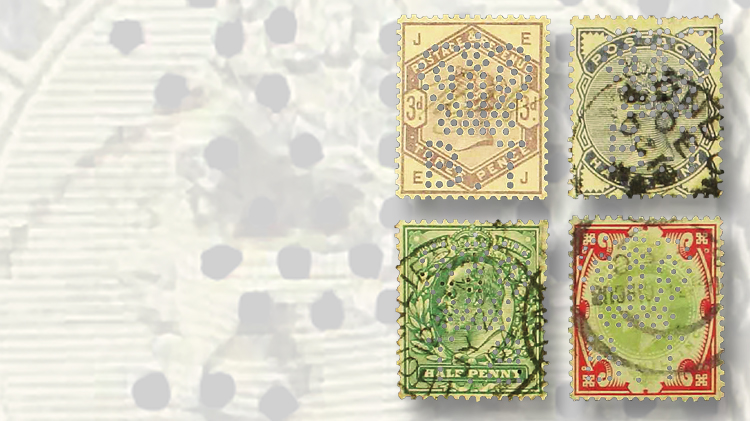 This selection of purported Crown-over-B.T perfins from a recent auction lot contains one genuine overprint and three fakes. Learning to spot the good and the bad can save a collector from needlessly spending money on worthless stamps. To find out which is which, see the July 10 issue of Linn's.

Are you ready for the weekend? Linn’s editors certainly are, following a busy week of philatelic reporting. The presses, however, are coming on line to print the July 10 issue of Linn’s Stamp News that goes in the mail Monday, June 26, to subscribers. Here we serve up a few teasers of exclusive content to pique your philatelic curiosity.

While hunting for something unusual in an online auction of British stamps, Linn's Great Britain columnist Matthew Healey uncovered a lot of exotic-looking Great Britain perfins, or perforated initials, consisting of an imperial crown over the letters B.T. He was glad he obeyed the old adage: Before you get the stamp, get the book. It turns out only two or three of the 18 stamps in the lot appeared to be genuine.

Rossville distillery cinderella captures ‘The Spirit of the Nation’

Linn’s columnist Wayne Youngblood has a knack for finding unusual items. In this month’s The Odd Lot column, he tells how a cinderella (stamplike label) with the message “The Spirit of the Nation” was part of an effort by a commercial solvent company to rebrand and re-establish itself in an immediate post-Prohibition United States.

If you are looking for a new collection of stamps that won’t be expensive but will be attractive and interesting, Linn’s Stamps Down Under columnist Janet Klug suggests that you try exploring Cocos (Keeling) Islands. The Cocos Islands (also known as Keeling Islands) are actually an archipelago of 27 islands within two coral atolls in the Indian Ocean.