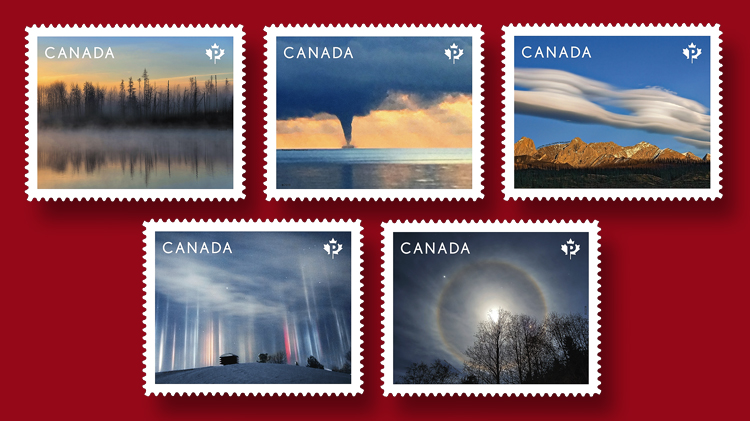 The new Canadian Weather Wonders stamp at bottom left features a photograph of light pillars that was taken in North Bay, Ontario.

Daily interaction with postal administrations from around the world is part of the routine here at Linn’s. While in Canada on a visit with the Canada Post stamp services team, we were talking about the new Weather Wonders stamps issued July 26.

This new set is the second part of a series of stamps that began in 2015. Fred Baumann reported on that set of stamps for Linn’s.

Canada Post stamp services director Jim Phillips told us that Baumann inadvertently influenced one design in the new set. Phillips followed up with an email detailing what happened after Baumann casually emailed Phillips back in 2015. I thought our readers would enjoy it, so here’s the story from Phillips:

“As you know we issued a set of stamps in 2015 re. Weather Wonders. In late 2016 and early 2017 we were working on a second part to be issued in 2018. Working with Canadian experts we had identified the five wonders and began to design them.

“This story ran January 11, 2017 and myself and my team missed it … but Fred did not. The very next day on January 12 Fred emailed me from Linn’s with the subject line ‘Here’s a Canadian image easily worth putting on a stamp.’ And suggested this would make a great stamp.

“Little did Fred know that we were already working on part 2 [of the Weather Wonders]. As soon as I got Fred’s email, I asked my team to look into dropping a weaker weather image/wonder and try[ing] this one.

“Our experts and Stamp Advisory Committee members agreed it was a better, very interesting image, so we contacted Timmy Joe. The rest is history.”