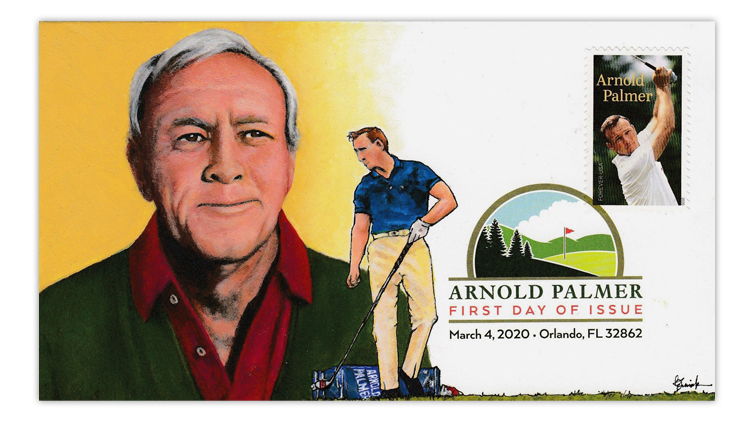 The best cachet of 2020 in the American First Day Cover Society’s cachetmakers contest was awarded to Bob Emrick for his hand-painted and hand-drawn first-day cover for the United States Arnold Palmer stamp. The award was presented at the AFDCS president’

Emrick’s design also won in the hand-painted and hand-drawn category.

For the first time, a junior member of the AFDCS, 17-year-old Arianna Calle, won an adult category. Calle won both first place and second place in the hand-painted/non-original art category.

The results were announced at the AFDCS president’s banquet during Great American Stamp Show held Aug. 12-15 in Rosemont, Ill.

Arianna’s covers have won first place or second place in the junior categories of the cachetmakers contest more than a dozen times previously, dating back to 2009.

The AFDCS cachetmakers contest is held annually for the previous year’s issues. Among the contest’s categories are media and production methods, foreign, events, esoteric and rookie of the year.

Three anonymous judges representing collectors, dealers and artists judge each category, then choose the best of the best for the top cachet honor. The winner of the top cachet is not eligible for the award the following year.

The AFDCS publishes its award-winning journal, First Days, six times a year, as well as handbooks and directories.

Arnold Palmer is honored at first day of issue event