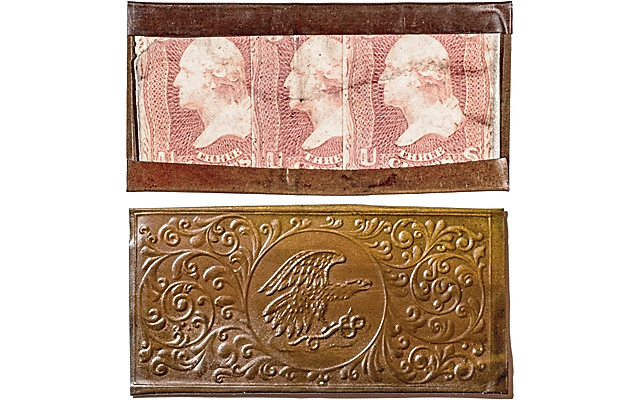 The sale contains 239 total lots, with nine lots representing Encased Postage Stamps. A 20 percent buyer's premium will be added to the final closing price of each lot won, according to the terms of sale.

Described in the auction lot listing as Choice About Uncirculated, the encased postage strip is attributed as EP-95a as cataloged in The Standard Catalogue of Encased Postage Stamps by Michael J. Hodder and Q. David Bowers.

Three red George Washington 1863 3-cent stamps are housed between a rectangular piece of clear mica and a copper strip whose top and bottom edges are rolled to keep the stamps contained. The back of the copper strip is embossed with an eagle and snake motif reminiscent of the earlier design of pharmacist Dr. Lewis Feuchtwanger's 1837 Hard Times token, Low 120 as cataloged by Lyman H. Low in Hard Times Tokens.

With a shortage of coinage during the Civil War, merchants resorted to using postage stamps as currency, often securing them behind mica attached to a round metallic piece having the name of the issuer or manufacturer on the side opposite the stamp. These were referred to as encased postage and functioned as money.

The authors cite a 1939 article in the American Numismatic Association journal, The Numismatist, in which it is reported that the 9-cent strips were being made in New York City at the close of the 19th century.

Paul Gilkes is a senior editor at Coin World, a publication under the same Amos Media ownership as Linn's Stamp News. Read this story on CoinWorld.com.