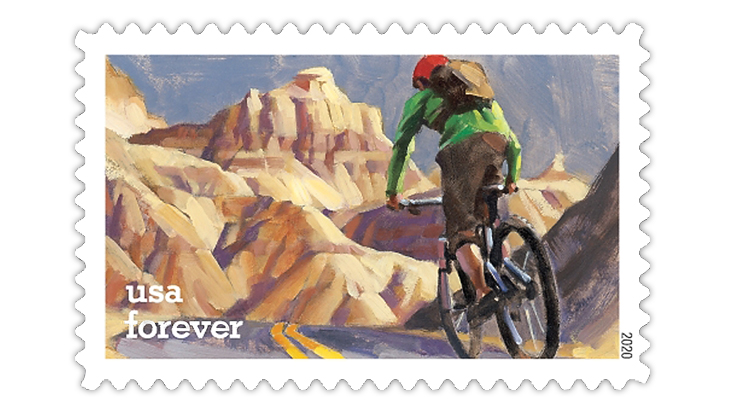 Bicycling is among the outdoor activities celebrated on five new United States stamps to be issued June 13. 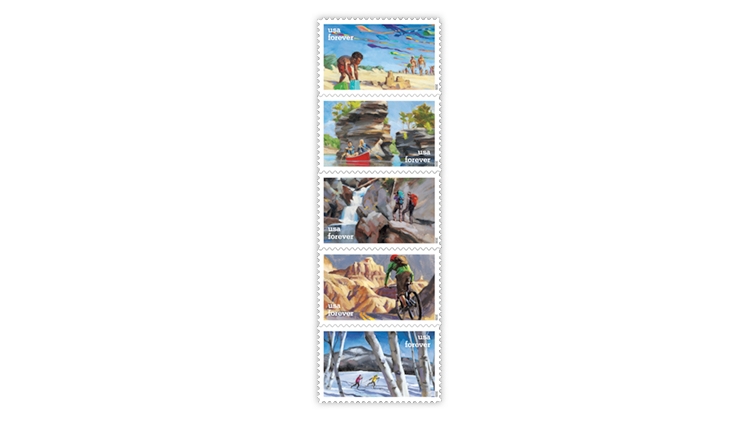 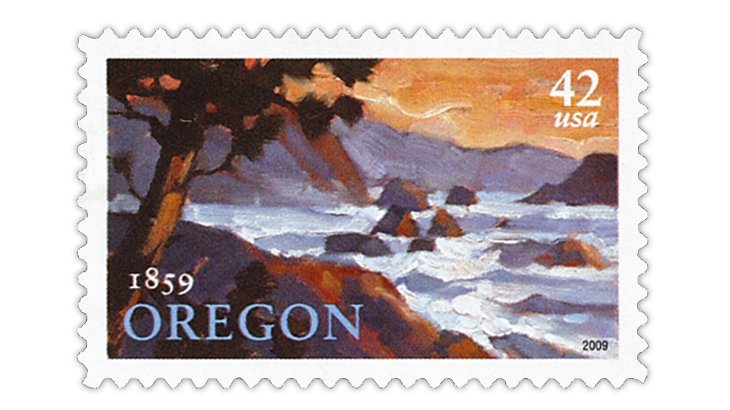 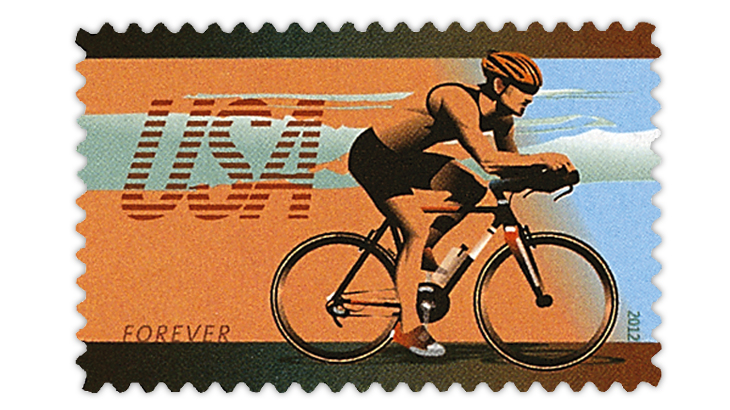 Bicycling has been a popular topic on U.S. stamps. This example is from a 2012 set of four. 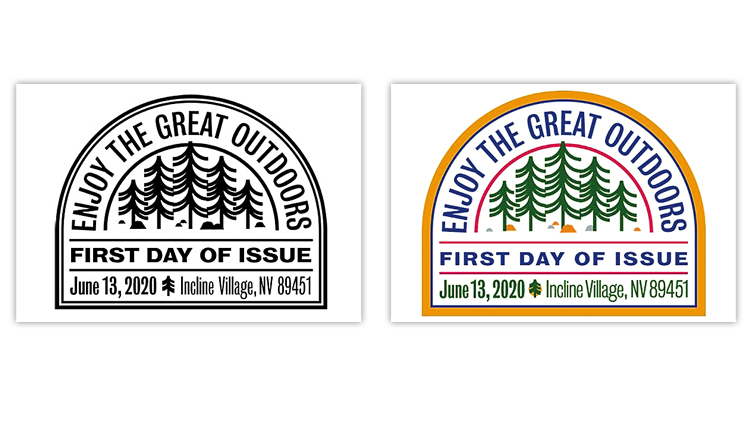 Two pictorial first-day cancels created for the Enjoy the Great Outdoors stamp set share a similar design, but one is printed in black and the other is printed in color.
Previous
Next

It has been a challenging year for people who enjoy the great outdoors. Travel options have been restricted by the coronavirus COVID-19 outbreak, and many public gatherings are at least temporarily prohibited by local and state governments.

However there won’t be a first-day ceremony for these stamps because of current social distancing guidelines. A dedication event for the stamp set might take place in the future.

The U.S. Postal Service has titled its new set Enjoy the Great Outdoors. The stamps show scenes of people strolling on a public beach, canoeing, hiking, biking and cross-country skiing. The beach scene features a young boy building a sandcastle in the foreground, with a fleet of colorful kites flying overhead.

“With the release of the Enjoy the Great Outdoors Forever stamps, the Postal Service celebrates the many ways individuals experience America’s abundance of natural beauty,” the USPS said in its introduction to these new stamps.

The nondenominated (55¢) forever stamps show no other inscription besides “usa” and “forever,” all printed in lowercase lettering.

The five scenes on these stamps were created by artist Gregory Manchess, who has previously illustrated U.S. stamps celebrating the 150th anniversary of Oregon statehood in 2009 (Scott 4376), acclaimed author Mark Twain in 2011 (4545), the 1963 March on Washington for Jobs and Freedom in 2013 (4804) and tennis champion Maureen “Little Mo” Connolly Brinker in 2019 (5377). USPS art director Derry Noyes designed the new stamp issue.

Manchess is described on his website as an award-winning painter who has worked as a freelance illustrator for 40 years.

“His work has appeared on covers and for feature stories of numerous magazines, such as National Geographic, Time, Atlantic Monthly, and The Smithsonian,” the website notes, while also mentioning his commissions for U.S. stamps.

The new stamps are offered in a pane of 20 that will be sold intact at Postal Service outlets; clerks have been instructed not to break the pane into smaller quantities.

Stamps celebrating outdoor recreational activities turn up in the U.S. stamp program from time to time, and bicycling is a particularly popular subject.

Hiking was the theme of a Depression-era Works Progress Administration poster that was the subject of a forever stamp in 2017 (Scott 5189).

Cross-country skiing has been celebrated as an Olympic competition on several U.S. stamps, including a 29¢ stamp from the 1994 set of five (Scott 2810).

The best U.S. stamp showcasing fun on the beach might be one of the 2¢ stamps in the Cape Hatteras National Seashore block of four (Scott 1448-1451). This stamp, which also shows the Cape Hatteras Lighthouse, features fishermen, a surfer and other beach enthusiasts.

The two pictorial first-day cancels prepared for the Enjoy the Great Outdoors stamps have nearly identical designs, though one is in black ink only, and the other renders the design in shades of green, blue, gold and pink. The arching postmark design encloses five tall evergreen trees and the name of the stamp issue.