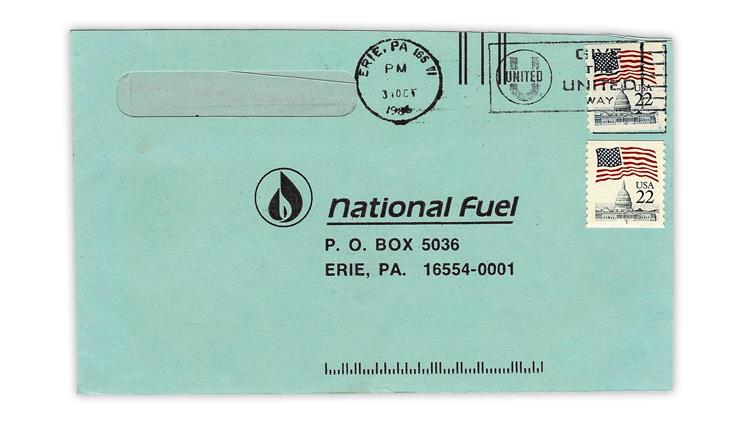 Figure 1. This National Fuel return envelope canceled in Erie, Pa., is franked with what is known as the “Erie blue” variety of the 22¢ Flag Over Capitol coil. For comparison, a normal example of the stamp is shown below the variety. 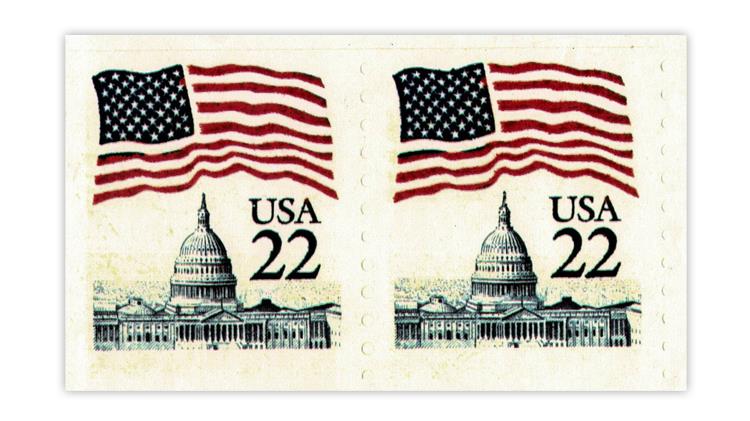 Figure 2. The Bureau of Printing included this image with a letter that explained how the Erie blue variety of the 22¢ Flag Over Capitol coil stamps likely occurred. The image reveals blue ink bleeding into the red stripe below the blue field of stars.
Previous
Next

In previous U.S. Stamp Notes columns, I have discussed the value of studies the Bureau of Engraving and Printing did on printing varieties of United States stamps that the public sent for analysis.

A subdivision of the Department of the Treasury, the BEP was good about providing this information about stamps it had printed. The BEP printed U.S. postage stamps from 1894 to 2003. At that point, the U.S. Postal Service stopped using the BEP’s services because the USPS could get stamps printed cheaper using contractors in the private sector.

But the BEP was happy to respond in 1990 when it received a request for information as to the cause of the blue color of the U.S. Capitol on a 22¢ Flag Over the Capitol coil stamp (Scott 2115).

Issued on March 29, 1985, the 22¢ Flag Over the Capitol stamp had been replaced in 1988 by the 25¢ Flag Over Yosemite stamp (Scott 2280), but the press on which the 22¢ stamp was printed was still being used, and the production records were still available.

Take a look at the cover in Figure 1 to see the blue Capitol on the 22¢ stamp and the correctly printed version in the inset below it. The variety has come to be called “Erie blue” because it was discovered in and around Erie, Pa. Almost all examples on cover are seen on National Fuel Co. return envelopes.

The “Erie blue” is not considered an error in the Scott Specialized Catalog of United States Stamps and Covers. Rather the cause, based on the BEP opinion, is contaminated ink rather than the wrong color of ink.

Here is what the BEP said about its comparison of a normal stamp and a blue example:

“The two 22¢ Flag stamps were examined visually and microscopically under ambient and ultra-violet illumination. All the requisite printing is present, and the phosphor taggant is intact. The Capitol building appears bluish instead of black and there are no signs of tampering.

“The ink is supplied to these rollers from ink fountains, each of which contains the desired color for printing. The fountains have a vertical arrangement. The fountain for the red ink is at the top, blue ink is in the middle, and black ink is at the bottom. Having been transferred to the rollers from the ink fountains, the ink is subsequently transferred to the printing cylinder. All excess ink is wiped from the cylinder except that remaining in the engraving.

“During wiping, there is a minor amount of one ink contaminating another ink, i.e., staining of the flag stripes by blue or black in may be evident on some stamps.

“During such a period, there is ample opportunity for ink to drip from one fountain into another if an ink metering blade is faulty. Upon start-up, the chances of ink dripping into another fountain is very remote.

“It is easily understood how some stamps were printed with contaminated black ink, because blue and black inks are not readily distinguished visually by mass tone, or when they are thick films. However, the submitted stamps do not meet BEP quality standards and should have been detected during inspection.”

Included with the letter was the image of a pair of the blue 22¢ Flag Over the Capitol stamps shown here in Figure 2. Beneath the blue field of stars on the stamps in this image is a bit of the ink contamination (blue into red) because of plate wiping referenced in the BEP letter. This is a minor freak and is present on a large percentage of these stamps.

Scott catalog editors do recognize one color error on this stamp: Scott 2115d with a black field of stars instead of blue. Given the BEP’s explanation for the Erie blue variety, that error would have been caused by putting black ink into the blue trough rather than by ink contamination.

I don’t know how many of these error stamps are known, but they must be scarce because Scott gives dashes in place of the catalog values for both mint and used examples, indicating insufficient basis for giving a value.

Certainly one of the attractions of errors, freaks and oddities (EFO) philately is that these EFOs become windows on how the various production systems work — and sometimes don’t work properly — as they print, gum, perforate and package stamps.