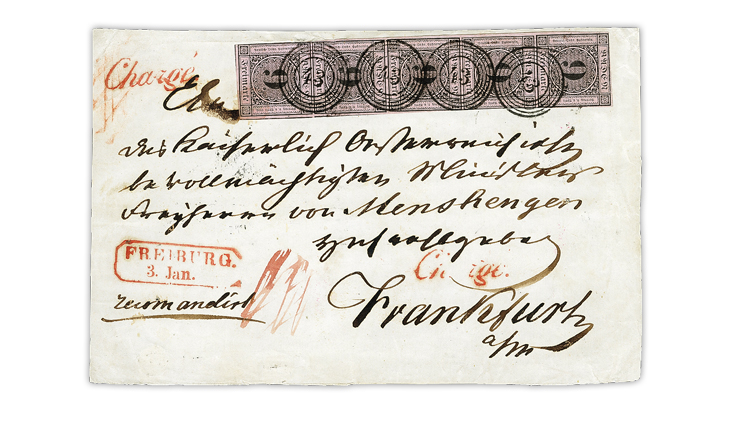 This cover, sent from Freiburg to Frankfurt, bears the largest used multiple of the Baden 1851 9-kreuzer black on deep rose paper. It will be auctioned by Heinrich Koehler, as part of its Dec. 14 sale of the Erivan collection of German States stamps and p

Heinrich Koehler will auction more than 300 lots of German states stamps and postal history from the Erivan collection Dec. 14. The auction will take place at the firm’s galleries in Wiesbaden, Germany.

The sale opens with a splendid selection of covers from Baden, the former grand duchy located in southwestern Germany.

Among the standout Baden items is a cover franked with a vertical strip of five of the 1851 9-kreuzer black on deep rose paper (Scott 4a).

The strip, which Koehler describes as “having bright colors,” shows four clear strikes of a five-ring numeral postmark, with the cancel at far right tying the strip to the cover. The “43” in the center of each postmark indicates the cover was mailed from Freiburg to its destination in Frankfurt.

Koehler describes the cover as bearing the largest used multiple of the stamp. Prior to Haub’s acquisition, the cover resided with the addressee’s family for more than 140 years, according to Koehler.

A 2019 Franz Stegmuller certificate accompanies the cover, which Koehler offers with an opening bid of €10,000, approximately $11,000 as of late November.

The catalog for the Dec. 14 Koehler sale can be viewed online, and online bidding options are available.