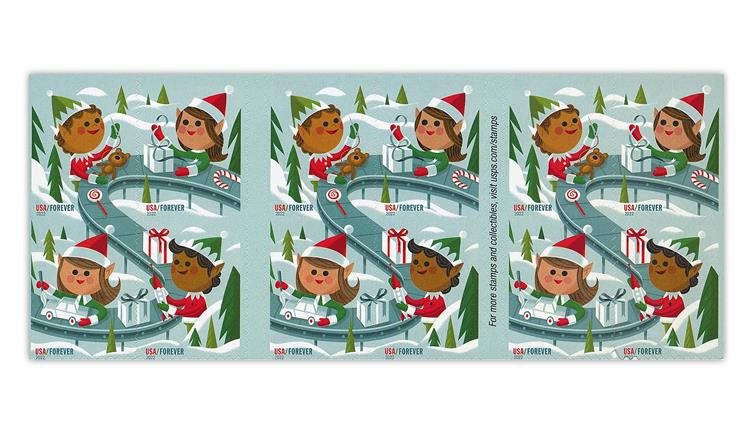 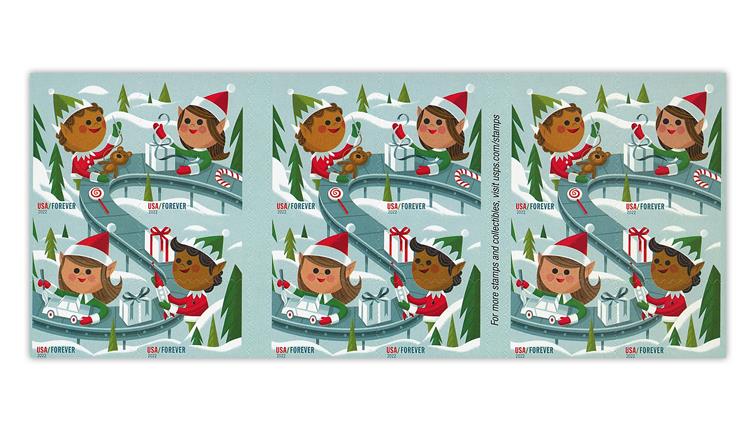 Moticha also sent this booklet pane of Holiday Elves stamps in which the row of horizontal die cuts goes through the chins of the elves on the bottom row of stamps. Scott catalog editors consider this pane a freak, not an error.
Previous
Next

Numerous reports of United States Holiday Elves forever stamps (Scott 5722-5725) with shifted die cuts were brought to the attention of Linn’s editors in late December 2022. One of these is an error that will be listed in the Scott catalogs.

In all of the reports, the horizontal line of die cutting had moved up or down in varying degrees. Most of these shifts resulted in a larger or a smaller stamp at top or bottom depending on which direction the horizontal die cut line had moved.

The standout example, which will be listed as an error by Scott catalog editors, is shown in the first image. On this example, the horizontal row of die cuts landed at the bottom of the pane resulting in two nearly complete missing die cut pairs.

Scott catalog editors will list a block of four imperforate-between horizontally with die cutting at the bottom as Scott 5725c. This listing will appear in the 2024 Vol. 1 Scott Standard Postage Stamp Catalogue to be published in April.

Stamp collector Michael Moticha purchased the error pane at a post office in southern California in December. He also purchased a few other examples, including one pane with the die cuts at the top, although Linn’s has not seen that example.

Shown in the second picture is one of Moticha’s examples with a less dramatic shift than on the error stamps. In this case, the row of horizontal die cuts went through the chins of the elves on the bottom row of stamps. These stamps are considered freaks, not errors.

“We were made aware of die-cut issues on Holiday Elves. BCA [Banknote Corporation of America, which printed the stamps] opened an investigation and they discovered that a very small percentage of stamps would have been affected in the overall press run. As you know, it is standard procedure that damaged stamp stock be returned to Stamp Fulfillment Services from Post Offices.

“There was no national communication to all Post Offices, however, there may have been internal communication within functional areas,” McKean said in response to Linn’s asking about a reported memo being sent to some post offices from USPS management calling extra attention to the Holiday Elves stamps.

Moticha’s report wasn’t the only one. When Dingguo Dai of Arizona, a stamp collector and a Linn’s contributor, was visiting family in Florida, his daughter-in-law purchased Holiday Elves booklet panes to use to send Christmas cards.

After Dai’s son had used the eight stamps from one side of the pane, he turned it over to use the other 12 stamps. However, when he tried to remove the stamp in the upper right corner, only about half of it peeled off.

He then showed the pane to his father. Dai noticed that the row of horizontal die cuts was much higher than it was supposed to be. Next, they checked the three other panes that had been purchased, but they were normal.

Dai sent Linn’s a scan of the pane of 12 stamps, which showed that it was a production freak and not an error, but the shift on this pane left a small gap in the vertical die cuts.

The Texas example was on a piece of mail sent to me by a seller on eBay. The seller, who was a postcard dealer and probably not familiar with misplaced die cuts on stamps, had cut the stamp at the design and put together the pieces. The horizontal die cut went through the middle of the stamp.

Two sellers on eBay, one in California and one in Pennsylvania, sold a combined total of four freak Holiday Elves booklet panes. These panes sold in the range of $30 to $70.

With nearly all distribution of the Holiday Elves stamps from Stamp Fulfillment Services in Kansas City, Mo., there is no real correlation with geography and whether a certain region received any of the problematic Holiday Elves booklet panes.