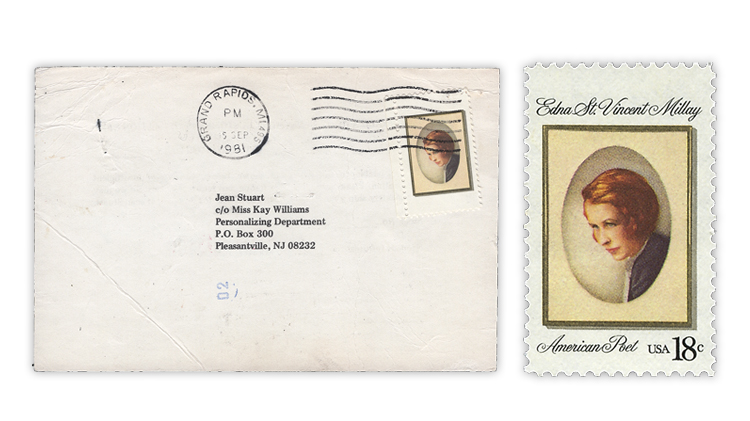 If rarity is measured by quantity only, this use on a commercial cover of a 1981 18¢ Edna St. Vincent Millay missing-color error is undoubtedly rarer than the fabled 1918 24¢ Jenny Invert airmail stamp. A normal example of the 1981 commemorative is shown

What could be scarcer than a genuine missing color error? The same error on commercial cover.

There may have been more, based on the cover shown here. That cover is franked with a missing-color stamp; a normal stamp is shown to the right of the cover. What apparently happened is that someone bought a pane of the error stamps and used them on mail, not realizing that he or she had a small gold mine, given that missing-color stamps are scarce and sell for way more than the face value.

The current Scott Specialized Catalogue of United States Stamps and Covers value for mint versions of the error is $200. (The value is in italics, which indicates an item that can be difficult to value accurately). But the commercial cover use shown here is far more scarce. Since a high percentage of mailed envelopes are thrown in the trash, this cover may be the only contemporaneous use that has survived. It’s certainly the only example I have seen or heard about.

If a Linn’s reader can prove me wrong, I would be interested to hear it.

I purchased this cover after I took a good solid look at the stamp with a 30x magnifier, as this is one of those missing-color stamps where a good percentage of those presented as candidates for expertizing turn out to have tiny spots and smudges of intaglio black ink disqualifying them from the error status they seek. Even one bit of color makes the stamp a freak rather than an error.

The stamp on the cover got a clean bill of health. There was no intaglio black ink to be seen. So I bought it without asking the dealer to put it on extension. That request is the prudent thing to do when buying missing-color stamps and the object of your potential affection does not already have an expertizing certificate.

To read the rest of John Hotchner’s column about expertizing, subscribe to Linn’s Stamp News.