Escape documented on postcard: Inside Linn’s 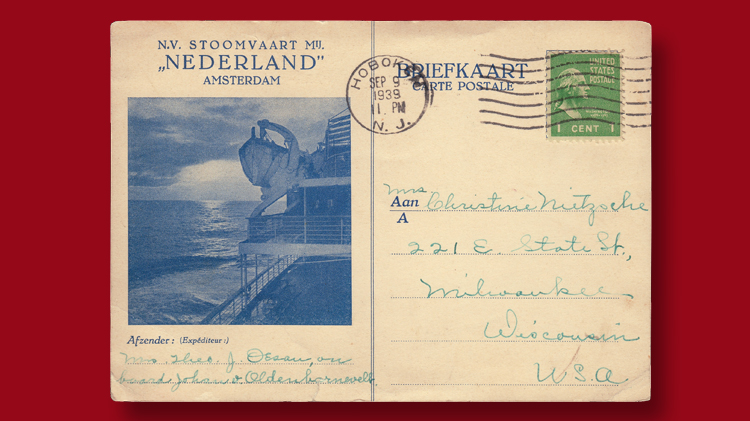 The message on this postcard identifies the sender as one of the last American citizens who left the Netherlands as war was being declared on Germany.

The Sept. 10 issue of Linn’s Stamp News just landed on the presses and goes in the mail to subscribers Monday, Aug. 27. And if you subscribe to Linn’s digital edition, you’re at the head of the line with early access Saturday, Aug. 25. Here are three previews inside the issue.

Escape from the Netherlands documented on a postcard

Shown above is a postcard with a written message that identifies the sender as one of the last American citizens who left the Netherlands as war was being declared on Germany. The writer also planned to stop at the 1939 World’s Fair in New York City on her way home. Wayne L. Youngblood examines the history behind it.

In Modern U.S. Mail, Tony Wawrukiewicz offers a 1936 cover from a United States Marine Corps colonel stationed in Shanghai, China, that was unpaid because “No Postage Available” according to the typed note. Only 3¢ postage was collected on delivery of the letter in Cheyenne, Wyo. Was this legal?

In this column in each issue of Linn’s, E. Rawolik VI or E. Rawolik VII analyze the content of stamp mixtures offered to collectors. E. Rawolik, of course, is a pseudonym that is “kiloware” (a stamp mixture) spelled backward. This week, E. Rawolik VII reviews a $5 mix from Ashmead Collectibles (Florida), and says the order was “as advertised and then some.”  The value surpassed the expectation, 31 countries were represented, and more than 60 percent were from this century.