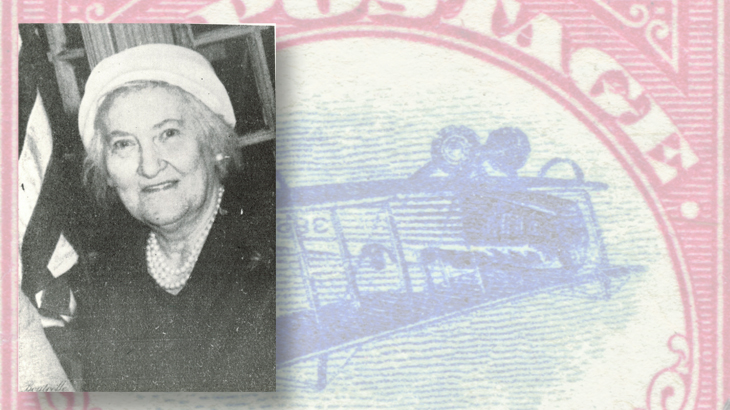 Ethel B. McCoy was a pioneer for women in the stamp hobby.

A recent news story on Linns.com reveals the discovery of one of the two missing 1918 United States Jenny Invert airmail error stamps from the famed McCoy block of four. The McCoy block is named for Ethel Bergstresser (Stewart) McCoy (1893-1980), an avid stamp collector best known for her collection of U.S. airmail stamps.

In 1936, when she purchased the block of four for $16,000, she was one of a small number of women who could be considered high-profile collectors. In a predominantly male stamp hobby, women who collected stamps were unlikely to exhibit or belong to stamp clubs.

Dale was one of the great women collectors of her time and likely the first to achieve international recognition. Yet her story is tucked in a chapter devoted to her even more famous father Alfred F. Lichtenstein, from whom she inherited most of what became her world-renowned collection.

Dale was a philatelic scholar in her own right. She became the first female judge at an international competition (at the 1956 Fipex international philatelic exhibition in New York City) and the first chairman of the Philatelic Foundation Expert Committee.

Sophie Buser (1902-1997) emigrated to the United States in 1922 from her native Switzerland. She married stamp dealer Eddie Buser, who’s family owned and operated a stamp store on Nassau Street in New York City.

Buser was an ardent promoter of Swiss philately. She co-founded the Women’s Philatelic Society of New York and the Helvetia Society for Collectors of Switzerland. The American Helvetia Philatelic Society offers the Sophie Buser Memorial youth award at any U.S. show that has at least a two-frame exhibit and an exhibitor 18 years old or younger.

Catherine L. Manning (1881-1957) began working in John Bartels’ stamp shop in Washington, D.C., before she took a temporary position at the Smithsonian Institution mounting stamps that the U.S. Post Office Department received from the Universal Postal Union. The Post Office Department had given the stamps to the Smithsonian’s National Stamp Collection.

Manning was elevated to assistant curator and then to curator of the collection in the Smithsonian’s division of history and spent the next 40 years building the collection for future collectors.

These dedicated ladies  paved the way in a mostly male hobby. Today, women collectors owe a debt of gratitude to them and to today’s female leaders of the hobby who share their love of and enthusiasm for stamp collecting.