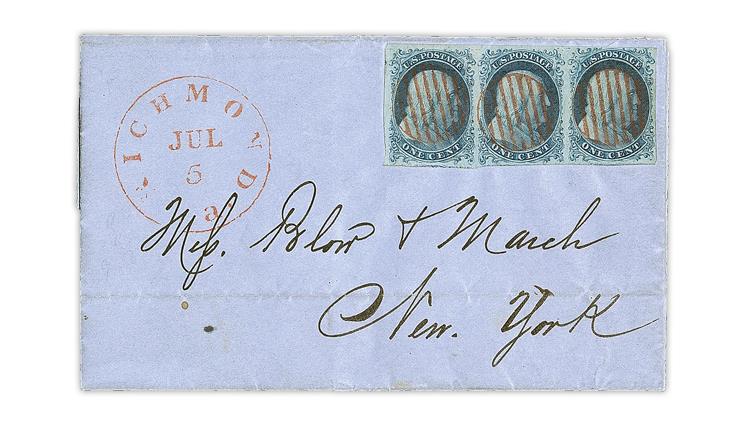 A highlight of Robert A. Siegel Auction Galleries’ Oct. 12-13 sale of the Gordon Eubanks collection of the United States 1851-56 imperforate issues is the famed Newbury cover franked with a strip of three 1851 1¢ Franklin stamps. The left stamp in the str 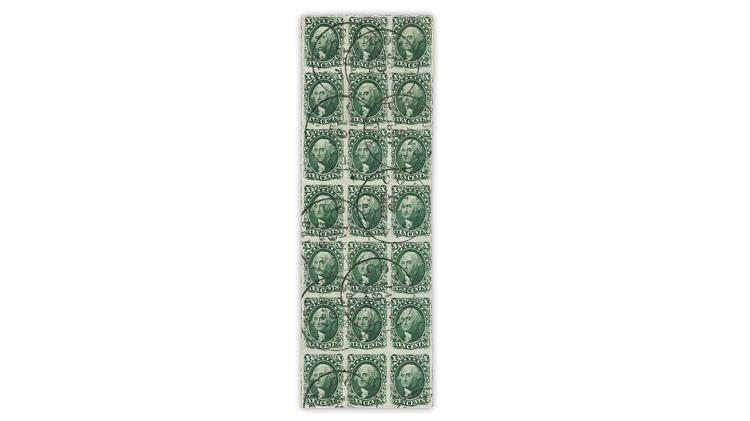 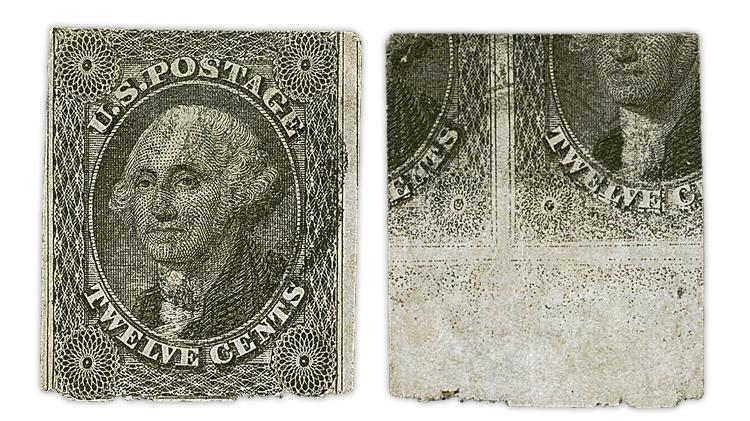 The Siegel auction of the Eubanks U.S. 1851-56 collection includes this 1851 12¢ Washington that is printed on both sides. The back of the stamp shows impressions of four separate stamps, two of which are exceptionally clear. Siegel lists this eye-catchin
Previous
Next

One of the finest collections of classic United States stamps and covers ever formed will go up for bids Oct. 12-13 when Robert A. Siegel Auction Galleries in New York City offers the Gordon Eubanks collection of U.S. 1851-56 imperforate issues.

Each day of the sale will be held in two sessions beginning at 10:30 a.m. and 1:30 p.m. Eastern Time. Siegel reminds potential bidders that each lot carries a buyer’s premium of 18 percent of the winning bid.

Eubanks assembled his remarkable collection with a discerning eye guided by discipline and extensive knowledge of this fascinating series of stamps.

His efforts were rewarded when his U.S. 1851-56 exhibit captured the Champion of Champions award at the 2014 American Philatelic Society Stampshow in Hartford, Conn., and the grand prix national award at World Stamp Show-NY 2016 in New York City.

In his introduction to the Siegel catalog for the Eubanks collection, Siegel president Scott Trepel provides a useful review of the importance of the U.S. 1851-56 issues, which came on the scene as the United States continued its rapid expansion across the continent.

Trepel also notes the many rewarding aspects of collecting these stamps and acknowledges Eubanks’ accomplishment.

“The 1851-1856 Imperforates in the Eubanks collection have everything a collector could desire,” Trepel writes.

“We regard it as the most outstanding collection of these issues ever formed … In our estimation, the material and overall quality of the Eubanks collection surpasses all other 1851-1856 collections.”

An icon in the collection, the famed Newbury cover, comes up early in the sale.

The cover was mailed July 5, 1851, from Richmond, Va., to New York City. It is franked with a strip of three of the 1851 1¢ Benjamin Franklin, the first of which is a type I stamp showing the complete design as it was originally engraved (Scott 5). This stamp is from the seventh position in the top row of 10 in the right pane of 100 printed from plate 1 in the early state, position 7R1E in collector shorthand.

Esteemed U.S. expert Stanley Ashbrook (1882-1958) “found only one position among the 1,000 subjects that met this requirement — Position 7R1E — which is why Scott 5, a Type I imperforate stamp, is so rare,” according to Siegel.

“The strip’s margins, brilliant color, sharp impression, neat red cancels and sound condition, and the cover’s overall appearance, led Ashbrook to declare it to be ‘number one’ among covers with U.S. general issues,” Siegel explains.

The other two 1¢ Franklin stamps in the strip are type Ib that show slightly less ornamentation (Scott 5A).

Although this legendary cover is named for collector Saul Newbury, it has graced the collections of four other eminent philatelists: Robert S. Emerson, Benjamin D. Phillips, Ryohei Ishikawa and John R. Boker Jr.

Siegel notes that the Newbury cover first appeared in 1911 at an auction conducted by George R. Tuttle, where it sold for $136.

Today the Scott Specialized Catalogue of United States Stamps and Covers values an example of Scott 5 in a strip of three imperforate 1851 1¢ stamps on cover at $180,000.

As the Newbury cover passed from one great collection to another, its value grew along with its importance.

One of the more unusual and eye-catching stamps from the Eubanks collection is a used 1851 3¢ Washington with what Siegel describes as very pronounced doubling of “U.S. Postage” at the top of the stamp (Scott 11Ae).

Siegel notes that the 3¢ denomination from the 1851-56 issue is the only one with a double impression, with only two or three recorded examples.

Siegel lists this 1851 3¢ Washington with a double impression at the Scott U.S. Specialized catalog value of $30,000. The stamp comes with a 2021 certificate from the Philatelic Foundation.

Another condition rarity in the Eubanks collection is an unused 1856 5¢ red brown Jefferson with full original gum (Scott 12).

The stamp features excellent color and has four ample margins that clearly show the projections on all four sides that identify the stamp as the scarce type I variety.

According to Siegel, the 1856 5¢ Jefferson “was typically used to pay the 5c shore-to-ship rate for mail sent overseas and also in multiples for the 10c transcontinental or 15c U.S.-French treaty rates.”

Siegel states that this handsome 1856 5¢ Jefferson comes with 2004 certificates from Professional Stamp Experts and the Philatelic Foundation. Siegel is offering the stamp at $30,000, the value for an unused original-gum example in the Scott U.S. Specialized catalog.

Among the more impressive multiples in the Eubanks collection is the so-called Colossus block: a vertical block of 21 that is the largest recorded multiple of the 1855 10¢ Washington issue. The block contains examples of type II and type III stamps (Scott 14 and 15, respectively).

Key characteristics of this block include two misplaced transfers that produced type III stamps in those positions instead of type II, and two major double transfers. The block bears multiple strikes of a large Jan. 19, 1857, Columbia, Calif., circular datestamp.

The block, which once contained 30 stamps, “was used to mail a valentine from Gold Rush California in 1857, and for the century since its discovery the block has been unchallenged as the largest multiple of the 10-cent 1855 imperforate issue,” according to Siegel.

Eubanks acquired the Colossus block for $112,100 during Siegel’s Oct. 3, 2018, auction of U.S. stamp treasures from the William H. Gross collection.

A highlight of the 1851 12¢ Washington section of the Eubanks collection is one of the four recorded examples of the stamp printed on both sides (Scott 17c). This error is not known unused, according to Siegel.

Siegel states that the back of the stamp “shows designs of four separate stamps, the two at top are clear and bold, with ‘Cents’ and ‘Twelve’ as well as one Washington portrait perfectly clear.”

“Engraved stamps printed on both sides usually have a poor impression on one side and a second, complete impression on the other,” Siegel explains.

“They probably occurred when a sheet was printed without proper moistening, which prevented the paper from picking up the ink in the recessed lines of the engraved plate.”

A single catalog has been prepared for the two-day Eubanks U.S. 1851-56 sale. Full details of the auction, including an online version of the catalog and online bidding options, are available on the Siegel website.