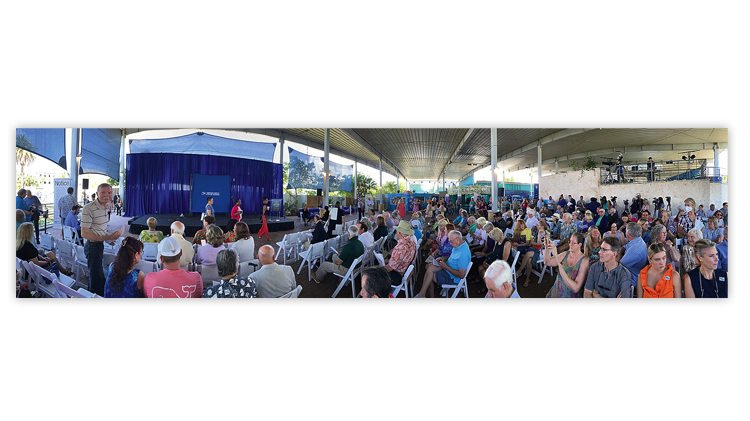 The ceremony for the new United States Eugenie Clark forever stamp was held Wednesday, May 4, at the Mote Marine Laboratory and Aquarium in Sarasota, Fla. Clark was born 100 years to the day on the issue date, and she was the primary founder of this facility.

Those preregistered received free daily admission to the facility, a $25 value. As seen in the photo here, well over 200 people were in attendance.

The entrance to the aquarium had photos and a time line of Clark’s career. Clark also could be seen in several photos with stamplike frames on display at the ceremony site.

Enthusiastic volunteers and staff from Mote Marine Laboratory and Aquarium were on hand to assist.

Plenty of stamp products were available, including panes of stamps, digital color and black ink first-day covers, and framed enlarged pictures of the Eugenie Clark stamp. Supposedly, uncut press sheets were also available, but I did not see them nor observe any sales of such. The U.S. Postal Service did not run out of any products.

The Postal Service staff worked with two of the shark pictorial cancellation devices plus one circular datestamp. Lines at the sales and cancellation areas were minimal. Stamps were on sale well before the ceremony, so items could be serviced beforehand, and they remained on sale for several hours afterward.

There were plenty of first-day ceremony programs; I was able to get two copies. The USPS placed a stamp on the outside envelope tied with the black cancellation.

Stamp pins with a silver-colored metal backing were given out. The USPS kept the pins in short supply, and it took several requests to acquire one.

Mistress of ceremony Jennie Janssen, president and co-founder of Minorities in Aquarium and Zoo Science was quite moved by the event and expressed fondness for Clark and her accomplishments. Janssen became a little choked up at the beginning of the ceremony.

All speakers (except Mote Marine president Michael Crosby) were available to sign programs afterward in an area next to the stage. I brought a Sharpie with gold ink and had family members use it to autograph my programs. Clark’s only grandson, Eli Weiss, commented that he liked the colored ink, so I gave the pen to him for the remaining signatures.

There was a lot of interaction between staff, family and colleagues after the ceremony.

To read the rest of this story about the Eugenie Clark first-day ceremony, subscribe to Linn’s Stamp News.