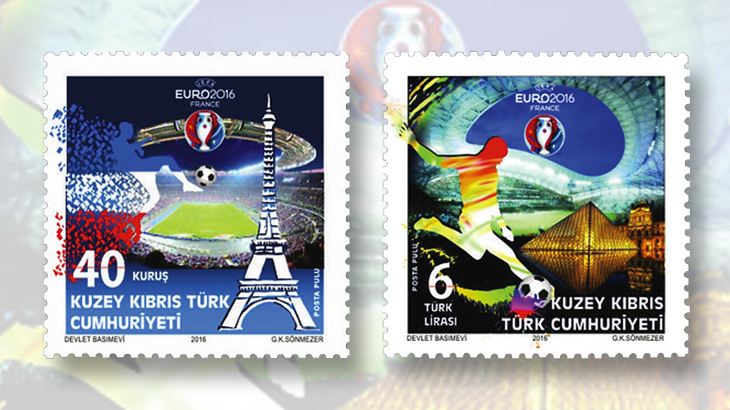 Two new stamps from the Turkish Republic of Northern Cyprus commemorate the Euro Cup soccer championships to be hosted by France in June and July.

Amongst the many benefits of having grown up in London was the development of an early appreciation for the age-old sport of football, or as its known here in the United States, soccer.

Across the Pond and throughout Europe and South America, this is no "game." Football is almost, for all intents and purposes, considered a "religion" in many parts of the world.

Although I attended an American school, we played soccer during gym period and on teams for after-school extra-curricular activities, and we were pretty good. Or so we thought, until we came up against an English team in which case we'd get our heads handed to us every time. The Brits were and are incredible ball handlers.

UEFA, created in 1954 and currently headquartered in Nyon, Switzerland, acts as the governing body for all the football associations of Europe and is in charge of such things as setting play regulations and the awarding of trophies.

A mere three months away, 24 teams will start vying for the title of 2016 UEFA champion on June 10 with elimination rounds running until the final match to be played on July 10. Held every four years, this year's event will be hosted by France.

On Feb. 25, 2016, the Turkish Republic of Northern Cyprus celebrated the upcoming Euro Cup by issuing a pair of stamps, one in a denomination of 40 kurus and the other 6 Turk lirasi.

Each stamp includes the UEFA logo, and the 40k stamp even includes an image of the Eiffel Tower honoring the host country. Printed by offset lithography, the images on these stamps are the creation of G.K. Sonmezer, a designer who is no newcomer to soccer stamps having, for example, also designed the football stamps for the 2006 World Cup Final also issued by Turkish Cyprus.

As an aside, important especially to the postal historians amongst us, note that the Turkish Republic of Northern Cyprus is a disputed territory and as such is not a member of the Universal Postal Union. All international mail sent to and from there is routed through Turkey.

With the Euro Cup only a few months away, keep your eyes peeled as I suspect more countries will be issuing stamps to commemorate this sporting event.