Everyone benefits from greater public involvement in the stamp process 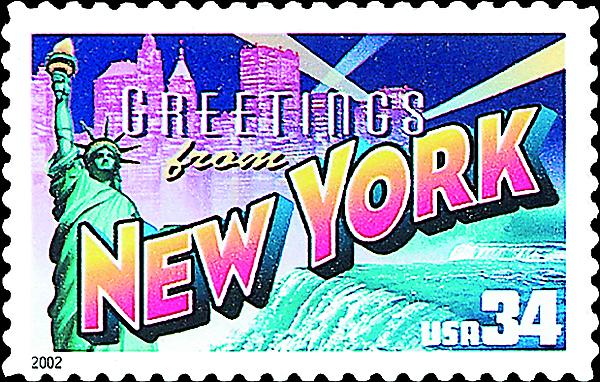 The 34¢ Greetings from New York stamp from the 2002 Greetings from America set. The issue’s success suggests it might be time for a similar blockbuster. 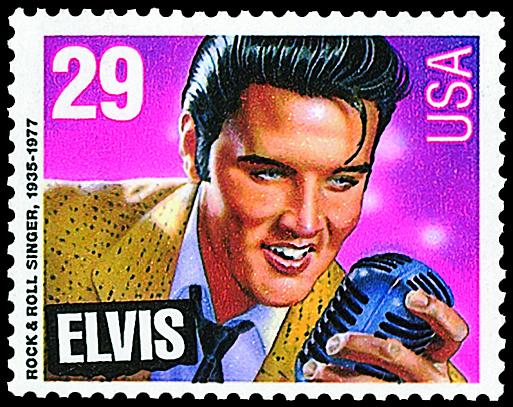 Enthusiastic public participation in selecting the design of the 1993 Elvis Presley commemorative stamp showed that Americans are interested in their country’s stamps.

Editor’s Note: Linn’s asked recently retired Citizens’ Stamp Advisory Committee member Cary R. Brick to share some thoughts about his 12 years on the committee. This is the last of three articles. The first appeared in the April 14 issue, and the second was published in the May 12 issue.

The president does it.

The Supreme Court does it.

So does the House of Representatives and the United States Senate.

Add to that mix the board of governors of the United States Postal Service.

They all do it.

“It” is simply conducting business in the open for all to see and judge.

It seems to me that it is time to introduce at least some level of transparency to CSAC deliberations.

The argument supporting closed-door meetings is to guarantee the sanctity of the committee and protect its members from lobbying.

Consider the following: The sanctity of the presidency hasn’t been destroyed by his visibility to the public, nor is the dignity of the Supreme Court challenged when it opens its chambers to the public when oral arguments are heard.

Likewise, there are no secrets in the deliberations of the Congress. Long before today’s instant social media coverage of every nook and cranny in the exercise of our democracy, and even before C-SPAN’s gavel-to-gavel coverage, its visitor and press galleries have been open to ensure that the people’s right to know is respected.

Lastly, even the Postal Service’s own board of governors has open sessions during its monthly meetings with no apparent damaging consequences.

Opening at least some portion of CSAC deliberations to public scrutiny would expose the philatelic and general public to the processes of creating 1-inch square pieces of art portraying the American experience, and would bring new people into the postal world.

The celebrated 29¢ Elvis stamp in 1993 involved and excited the public, proving that they are, indeed, interested and anxious players.

The current CSAC rules are designed to protect members from lobbying and other outside influences. Unfortunately, the perception of lobbying immediately conjures up negativity.

To me it’s not a dirty word. If I write a letter to my mayor asking for a streetlight to be installed in front of my house, and if my wife does the same, or if my grandsons and granddaughters and their classmates write to CSAC proposing stamps featuring creepy, crawling critters or peanut butter and grape jelly sandwiches — then we are lobbying.

No, lobbying is not a dirty word. CSAC members are selected because of their prominence and distinction in their respective fields; they are public people who really don’t need protection. From professional career experience, they know how to handle themselves and are savvy in the ways of the world.

Of course, not every stamp proposal or design should be the subject of a national referendum or a public hearing, with petitioners lining the corridors of USPS headquarters in Washington, D.C., waiting for their moment in the sun before a CSAC mike.

Increased public involvement, though, should be given serious consideration.

I’m proposing a concept of at least partial openness and transparency, and in doing so I am suggesting a constructive dialogue on that idea.

A new wheel doesn’t have to be invented. There are nearly 240 years’ worth of precedents from which to create a CSAC model that both opens the process and protects its integrity.

If lobbying is not a dirty word, then the concept of some level of transparency should not be repugnant either.

The advantage of retirement is 20/20 hindsight, in this case on my dozen years as a member of CSAC.

Here are a few thoughts that came to mind as I left Washington after my final meeting in January.

With my retirement and that of my colleague, CSAC Chair Jean Picker Firstenberg, membership on the committee dropped to 11; it can be made up of a maximum of 15.

I am from the farmlands and small communities of the Northeast, and Firstenberg is from Los Angeles. Our perspectives reflected West Coast urban and rural New York lifestyle experiences that were healthy and meaningful in our stamp subject and design discussions. While geography does not determine eligibility, I hope our successors will bring similar diversity to the table.

The matter of marketing is getting a new focus in the process, with an emphasis on the question, “What does the public want in their stamp program?”

I’ve often thought the Postal Service’s best sales force and untapped resource is made up of the men and women behind the counters in our 31,000-plus postal facilities. They know the consumer base better than anyone else.

CSAC could learn a lot by inviting three window clerks — one from rural America, one from suburbia and one from a big city — to meetings from time to time, to listen to their stories of what their postal consumers want and expect when they approach the postal counters.

Rural, suburban and metropolitan consumers undoubtedly have dissimilar tastes. Considered as a whole, their input would be a valuable working tool.

I’m a big fan of today’s pop culture, but I always respected the advice of one of my early CSAC mentors who said the potential popularity of a stamp subject should not replace its merit. In my view, the latter is paramount.

The 2002 Greetings From America pane of 50 stamps was a major hit with collectors and the public — sales were in the hundreds of millions.

It was a real winner, and perhaps it’s time to look for another such blockbuster; not with the state angle (the territories and the District of Columbia weren’t big fans), but something as exciting, bright and colorful representing the diverse lives and character of the American experience.