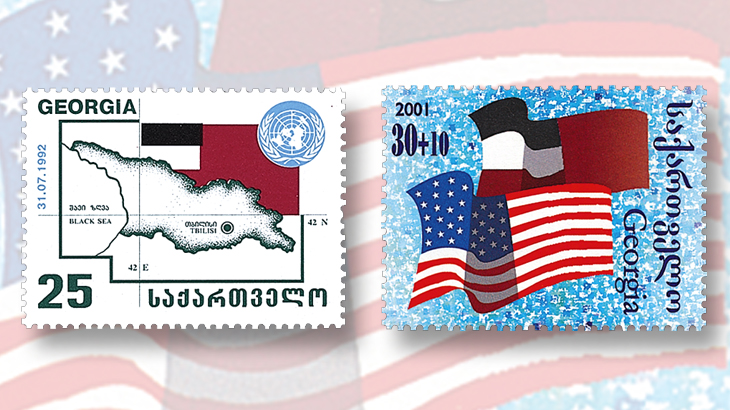 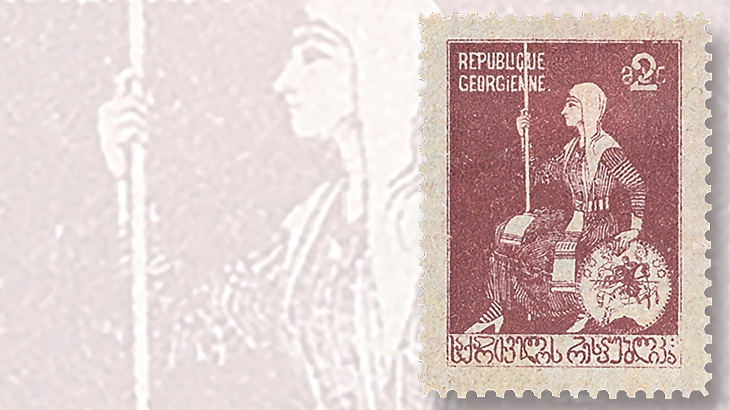 Georgia reached the height of its power, size, and cultural achievement under the reign of Queen Tamar (1160-1213). The queen is featured on this Georgia 2-ruble stamp issued in 1920 (Scott 13). 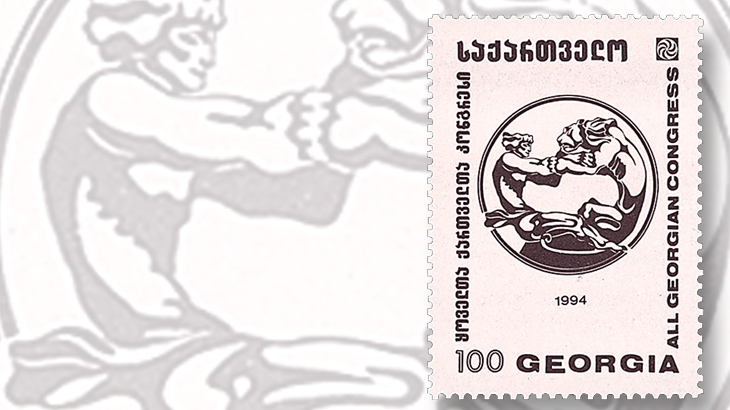 An inscription in the Mkhedruli alphabet of the Georgian language can be seen at the top and left of this Georgia 1994 100-coupon All Georgian Congress stamp (Scott 95A). 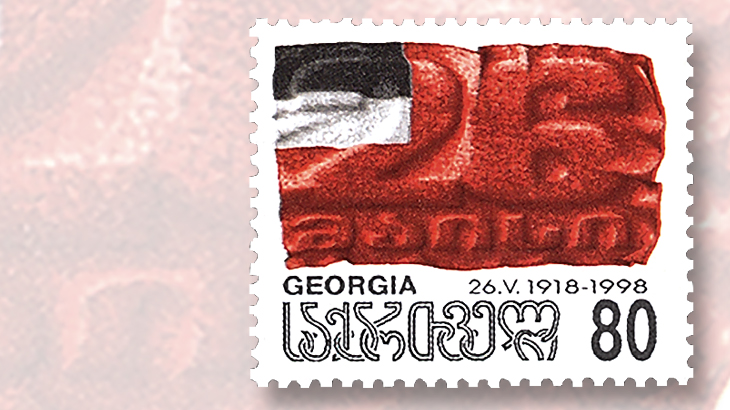 The flag of the Republic of Georgia adopted in 1918 is seen on this 80t 80th Anniversary of Independence stamp (Scott 187). 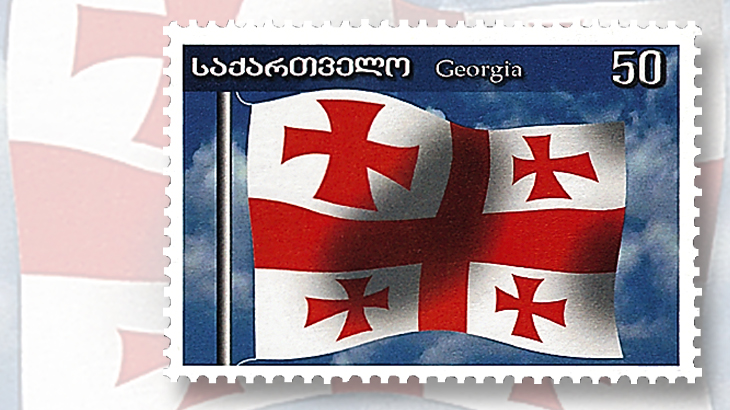 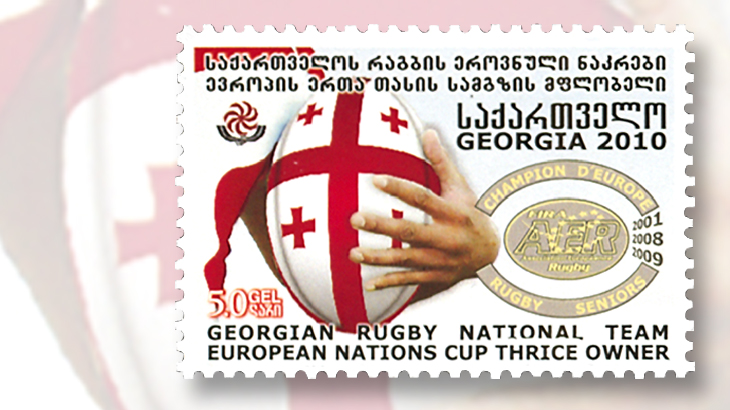 Rugby is arguably the most popular sport in Georgia. This 5-lari stamp issued in 2010 (Scott 459) celebrates Georgia’s national rugby team, which won the European Nations Cup in 2009. 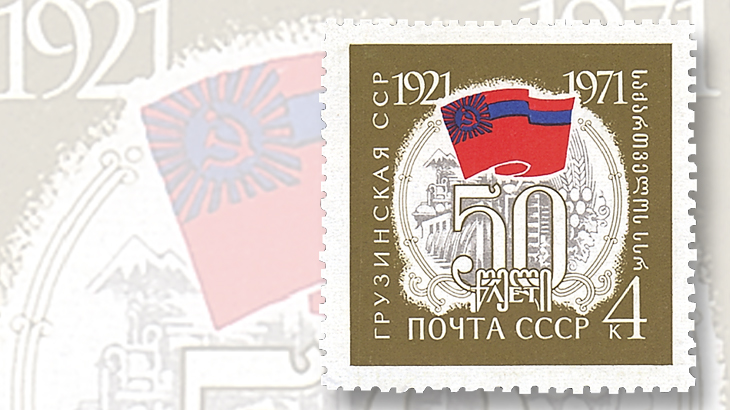 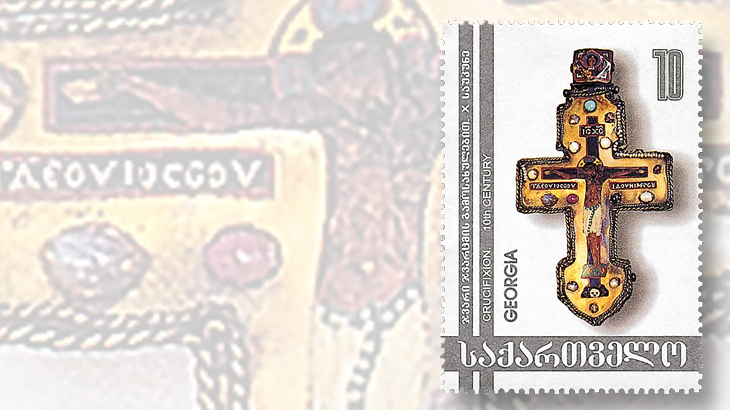 This 10-tetri stamp from Georgia (Scott 297), issued in 2002, pictures a 10th-century crucifixion cross.
Previous
Next

Vexillology is what those with a tendency toward exotic words call the study of or an interest in flags.

A purist might tell you that the Republic of Georgia does not belong in a Stamps of Eastern Europe column because Georgia is in Asia. Technically they might be right.

However, the boundary between Europe and Asia is highly arbitrary to begin with. Asia and Europe actually comprise a single supercontinent, and the division between them exists primarily in the minds of cartographers.

The best way to describe Georgia’s location is to say that it lies in the Caucasus region of Eurasia, making it fair game for this column.

Georgia has a population of about 3.7 million people. There is a large Georgian diaspora, with another half million or so living abroad, mainly in Russia, Ukraine, and North America.

The Georgian language is a member of the Kartvelian language family. Other members of the family are Mingrelian, Laz, and Svan, all spoken in the Caucasus region.

The Kartvelian languages have their own alphabet, Mkhedruli (which to my uncomprehending eyes looks a bit like Klingon), and are not related to any other living European or Asian languages.

An example of Mkhedruli script can be seen in the top and left-side inscriptions on the 100-coupon All Georgian Congress stamp shown nearby (Scott 95A). The stamp, one of a set of two issued Oct. 9, 1994, was printed by lithography and is perforated gauge 14.

The unified nation of Georgia was preceded by the forerunner states of Colchis (founded circa 1200 B.C.) and Iberia (circa 300 B.C.). Iberia was the Roman name for the country. The natives called it Kartii.

Georgia was a battleground for the periodic wars between the Roman and Persian Empires. Kartii converted to Christianity under King Mirian III in A.D. 337, making it one of the oldest Christian nations on earth.

Today about 85 percent of the Georgian population adhere to the Georgian Orthodox Church. A 10-tetri 10th Century Crucifixion Cross stamp (Scott 297) from a 2002 set of four Pectoral Cross stamps (Scott 297-300) is shown nearby. The stamps in this set are perforated 14½ by 14.

Although dominated in turn by the Romans and Persians and conquered by Muslims in 645, Georgia was able to preserve its national, cultural, and religious identity to reemerge as an independent kingdom in the Middle Ages.

Georgia reached the height of its power, size, and cultural achievement under the reign of Queen Tamar (1160-1213). During her reign from 1184 to 1213, Georgia dominated the Caucasus and extended its control into Armenia and parts of Persia, Turkey, and Ukraine.

A 2-ruble Queen Tamar stamp (Scott 13), issued by the Republic of Georgia in 1920, is illustrated here. Stamps of this design were issued in 2r, 3r, and 5r denominations perforated gauge 11½ and imperforate (Scott 13-18).

Georgia suffered Mongol, Persian, and Ottoman invasions and conquest, but the spark of Georgian nationalism survived to be reestablished as an autonomous kingdom in 1762.

In 1783, Georgia became a protectorate of the Russian Empire. Between 1801 and 1813, Russia annexed the various Georgian territories outright.

On May 26, 1918, during the Russian Civil War, the Republic of Georgia declared its independence. The national flag adopted at that time can be seen on the 80t 80th Anniversary of Independence stamp pictured nearby (Scott 187). The stamp, issued Dec. 25, 1988, is perforated gauge 14.

Flush with victory from defeating the Whites in the Russian Civil War, the Red Army invaded and conquered Georgia in February 1921, establishing the Georgian Soviet Socialist Republic.

The flag adopted at that time was a red field with the Cyrillic letters “SSRG” in the upper-left corner in gold. That flag would remain until 1937.

In 1924, the Bolsheviks combined Georgia with Armenia and Azerbaijan in the Transcaucasian Soviet Federated Socialist Republic, which then became a constituent republic in the Union of Soviet Socialist Republics.

In 1936, the Transcaucasian SFSR was broken up and Georgia, Armenia, and Azerbaijan became SSRs in the Soviet Union.

A new flag for the Georgian SSR was produced in 1937, similar to the previous flag but with the lettering in the Mkhedruli alphabet.

In 1951, the third and final flag of the Georgian SSR was introduced. This flag is seen on the Soviet 4-kopek 50th Anniversary of the Georgian SSR stamp (Russia Scott 3813) depicted here. The stamp, issued Jan. 12, 1971, was produced by lithography and is perforated gauge 11½.

The flag’s design features a red field with a hammer and sickle outlined in a square blue sunburst at upper left and a horizontal blue stripe across the red field.

On April 9, 1991, Georgia joined the growing stream of nations declaring their independence from the collapsing Soviet Union. The newly minted Republic of Georgia adopted the flag previously used by the first Georgian Republic (1918-1921).

The flag can be seen in the design of the first set of Georgian stamps issued after independence was reestablished (Scott 73-75). The 25r stamp from the set (73) is shown nearby.

The set, issued July 31, 1993, and perforated gauge 13½, commemorates the first anniversary of Georgia’s admission to the United Nations. An outline map of Georgia, the Georgian flag, and the UN seal can be seen in the design.

The flag also features as a design element in the 30t+10t Flags of Georgia and the United States semipostal stamp (Scott B13) issued Dec. 31, 2001, in memory of the Sept. 11, 2001, terrorist attacks in the United States.

In 2003, the Revolution of Roses, a series of massive pro-Western peaceful protests against government corruption and election fraud, brought down the Georgian government.

Supporters of the Revolution of Roses chose for their symbol the Five Cross Flag, which was the flag of the Medieval Georgian kingdom.

The flag uses the same symbology as the Jerusalem Cross, with the five crosses representing the five holy wounds of Jesus at the Crucifixion. On Jan. 24, 2004, this flag was adopted as the new national flag of Georgia.

Rugby is arguably the most popular sport in Georgia with the national team, the Lelos, holding membership in the international Rugby Union.

The team competes in the annual European Nations Cup and the World Rugby Cup held every four years.

Georgia has hosted an invitational World Rugby Tbilisi Cup annually since 2013. Tbilisi is the capital of Georgia.

Georgia is currently ranked 11th in the world by the international Rugby Union. Georgia won the European Nations Cup in 2009.

The 5-lari stamp commemorating the championship (Scott 459), shown nearby, features a rugby ball decorated with the Five Crosses national flag. The stamp, issued Oct. 15, 2010, was produced by lithography and is perforated gauge 13¼.

Many countries have issued stamps featuring their flags or the flags of other nations on their stamps. Collectors interested in finding out more about topical stamp collecting should visit the American Topical Association’s website.