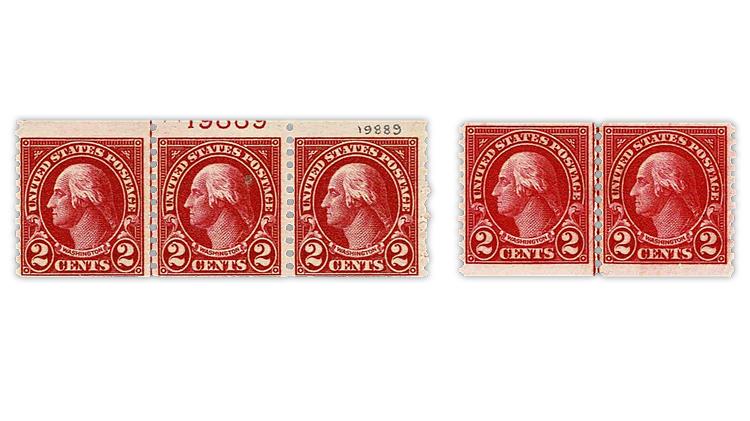 Figure 1. Comparing the dark strip of three miscut 1923 2¢ Washington coil stamps to normal carmine stamps from this era might lead some collectors to believe they have found a relatively scarce carmine lake variety. However that is not so in this case. 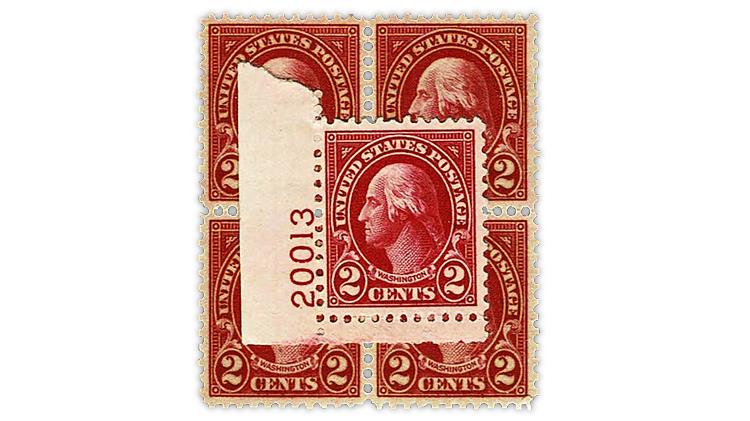 Figure 2. The block of the 1926 2¢ Washington behind the plate number single is a true carmine lake color. The single is darker than the normal carmine, but not dark enough to be carmine lake. 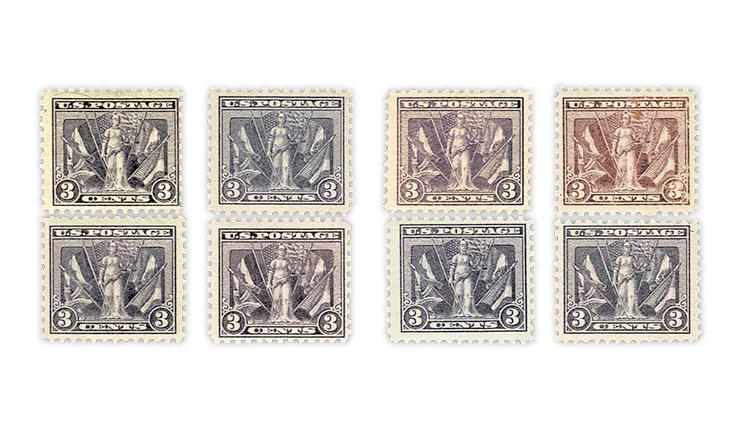 Figure 3. The basic 1919 3¢ violet World War I Victory stamp (upper left) is shown with seven other stamps that do not match the three color varieties listed in the Scott Specialized Catalogue of United States Stamps and Covers. Because of the range of co 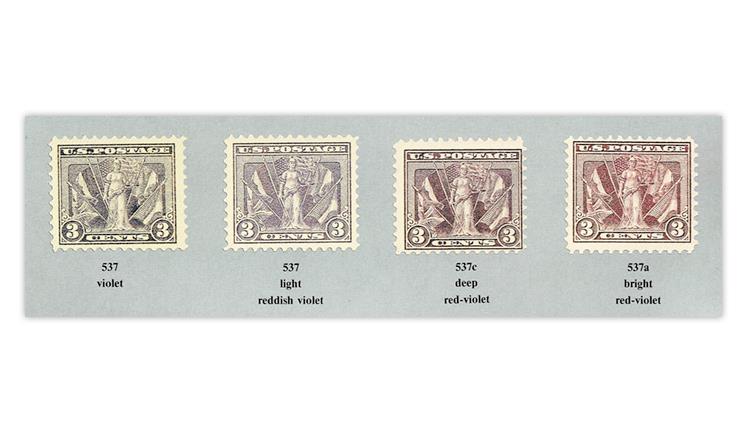 Figure 4. The best reference for the catalog-listed colors of the 1919 3¢ World War I Victory is this color plate from R. H. White’s Encyclopedia of the Colors of United States Postage Stamps, Vol. IV, published in 1981. The Victory stamp is the last regu 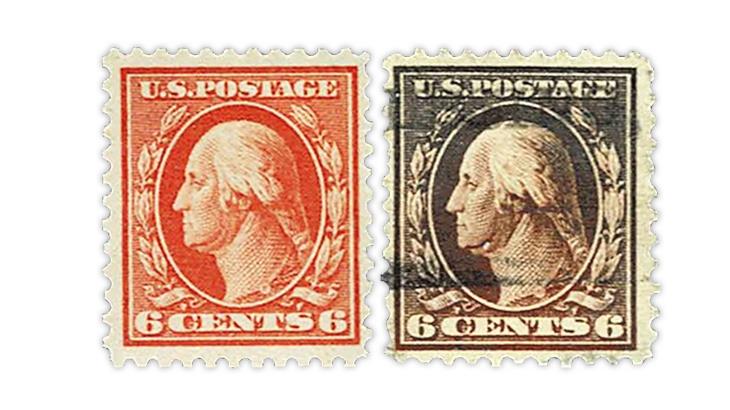 Figure 5. Shown side-by-side are two 6¢ stamps from the Washington-Franklin series of 1908-22. The orange stamp is as issued. The brown stamp has absorbed and been changed by sulfur oxide.
Previous
Next

A consistent problem for expertizers of United States stamps is shades of intended colors.

When a proposed color was approved by the Bureau of Engraving and Printing (from 1894 onward) and the Post Office Department, on-press rendering began true to expectation. But over time, ink components could change. Small changes in mixing the components could alter the final result, or an occasional mistake could creep in.

Also post-printing conditions, such as sunlight and exposure to chemicals, could slightly alter the printed color.

The result is that early stamps, especially those produced over several years or in large quantities, can often be found in a range of differentiable colors. Some of these colors are mentioned in the Scott Specialized Catalogue of United States Stamps and Covers and some are listed with small alphabetical letters as a significant variety, often with a fancy value.

This seems simple enough. The expertizer just needs to match the stamp with the right color description. But it’s not. Scott doesn’t, nor could it practically, list every known color variety; these varieties sometimes extend to a dozen or more for a specific stamp. This means that there are shades in between the normal and listed varieties.

A collector who happens on one of these may think he has found the holy grail and submits the stamp for a certificate. It then falls to an expertizer to determine whether it makes the grade, or falls into the close but no cigar category.

In this column, I am presenting a few examples in order of difficulty.

The first is the 1923 perf 10 2¢ Washington coil stamp (Scott 599). Scott lists the normal stamp as carmine and also notes that there is a deep carmine variety with the same 35¢ catalog value for unused examples. But there is also a listing for a carmine lake stamp (Scott 599b) with a $300 catalog value in italics. (Italics indicate a stamp that can be difficult to value accurately.)

Look at the miscut partial plate number coil strip of this stamp that is shown in Figure 1 along with an example of a normal carmine line pair. You will notice that the strip is quite dark. It was submitted for certification as the elusive carmine lake.

The American Philatelic Expertizing Service (APEX) expertizers reviewed it, compared it to reference examples and concluded that it is the deep carmine shade.

More problematic is the plate number single of the 1926 2¢ carmine Washington (Scott 634) shown in Figure 2. It was submitted for expertization as the carmine lake variety (634b). The plate single is shown on top of a block of certified 634b stamps. You can compare.

Scott also mentions the existence of carmine red and carmine rose stamps, but without their own catalog numbers.

The plate single in Figure 2 is clearly not the routine carmine; neither is it red nor rose. But it isn’t dark enough to be carmine lake. What to do?

After the experts finished with this one, APEX issued a certificate calling the plate single dark carmine, a color variety not included in the catalog at all.

Take a look at the range of colors that exists for this stamp as shown in Figure 3. Not one of these precisely matches the catalog-listed colors, except for the basic violet stamp in the upper left. All of the others are varieties of it or an almost-listed variety.

What does an expertizer do when faced with such color varieties? If the expertizer has examples of the varieties to use for comparison that is a plus.

Alternatives exist, however. A reference guide can be constructed from certified examples that have been pictured in color plates in major auctions. There also is the color plate in R.W. White’s Encyclopedia of the Colors of United States Postage Stamps, Vol. IV.

White begins his encyclopedia of stamp colors with the 1847 stamp issue, and Scott 537 is the last regular issue in Vol. IV, published in 1981. White’s four colors for that 1919 3¢ Victory stamp are shown in Figure 4. Unfortunately there is no similar comprehensive reference for subsequent issues.

Expertizers working with a patient (a stamp submitted for expertizing) must carefully assess whether it precisely matches a known example (either another certified example or a photograph of one). It is a matter of careful judgment for a skilled expertizer to make the call, and the match must be precise and made in excellent light, sometimes with multiple types of lighting and magnification as well.

There is no prize for almost. And in my experience as well as in consulting available databases of previously expertized stamps, that is what well over half of all submissions for these color varieties are.

I would even go so far as to say that some of the older certifications of Scott 537a, 537b or 537c would not pass muster today. How they got certified in the past is a mystery to me, and to the extent they are used as a matching resource today, they are problematic.

All of this is to say that there is a reason that expertizing findings are called opinions and are never represented to be unalterable fact. So much depends upon the diligence and experience of the expertizer and the resources used. There is no room for guessing, even informed guessing.

In a recent Scott 537 expertizing request, two well-known and well-regarded expertizers declined an opinion because they did not have adequate reference material. It was the responsible thing to do.

Every so often a collector will send in for review a brown stamp similar to the example on the right in Figure 5, one where the design is shown in the Scott catalog but there is no listing for a brown version. The collector wants to know if it is a rare error.

Such stamps are neither rare nor errors.

These stamps were usually printed in orange, and the 6¢ orange Washington stamp is shown with the brown version in Figure 5.

The cause of the darkening of the color is the absorption of sulfur oxide or hydrogen sulfide by components of the ink. Perhaps the process is pushed along by moisture, heat or light, but it is a natural process rather than a man-made fraud.

The effect is most often seen on early orange revenues, the 1918 Curtiss Jenny 6¢ airmail stamp (Scott C1), the 1898 Trans-Mississippi 4¢ (287), the 6¢ Washington stamps of the Third Bureau Issue and the 6¢ Garfield stamps of the Fourth Bureau Issue.

The affected stamp’s original color can often be restored by a very careful application of a weak bleach solution or a weak solution of hydrogen peroxide.

I would recommend experimenting with common, used stamps using small amounts of the chemical on a cotton swab or the type of paintbrush often used to paint ship or airplane models. Be very careful if trying this with a mint stamp.

Keep in mind that it is highly unlikely that anyone is going to discover a new or unlisted error from the first hundred years of U.S. stamps. These stamps have been handled by generations of collectors and studied by philatelic scholars. Anything unusual will have already been reported and will be on the books.