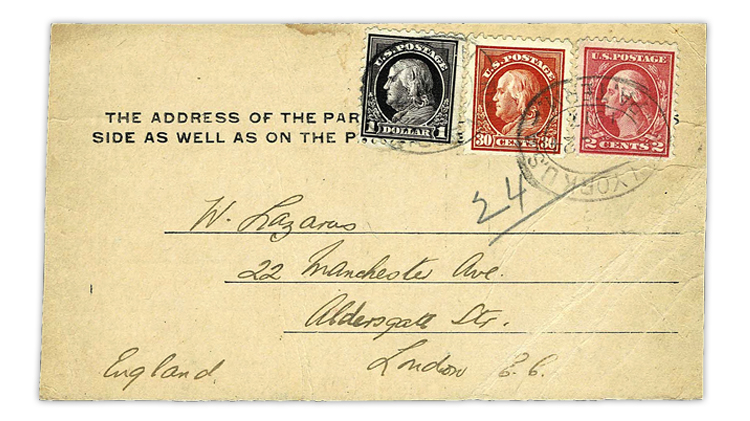 Figure 1. Earliest known (or documented) uses fill a gap when there is no acknowledged first day of use of a stamp. The Scott Specialized Catalogue of United States Stamps and Covers provides EDU information where needed for stamps into the 1920s, based o 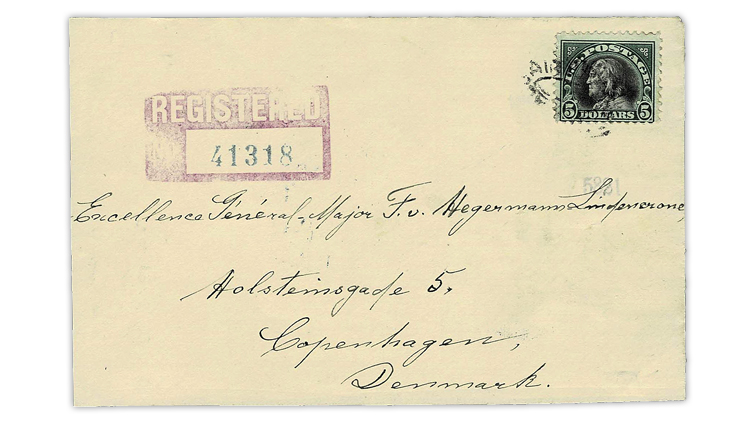 Figure 2. This March 20, 1920, registered cover to Denmark is the former record holder for the $5 Benjamin Franklin stamp (Scott 524). It was superseded by a strip of nine $5 stamps on piece with a date more than a year earlier.
Previous
Next

A question from Linn’s reader Dave Moore put a different spin on what many call earliest-known uses (EKUs) for United States stamps issued into the early 1920s. These are stamps where a release date is known, specifically or generally, but the first day of use is not known. In these cases, the Scott Specialized Catalogue of United States Stamps and Covers provides what it calls an “earliest documented use” date, or EDU.

For the purposes of this column, EKU and EDU refer to the same thing.

Expertizing determines EDUs, and Scott editors will change the EDU date based on a recognized certificate stating an earlier date than previously documented. This is a big deal. Not just because accuracy matters, but because there are collectors who chase EDUs and are willing, even eager, to pay a significant premium for them.

Take a look at the two dollar-denominated covers shown with this column.

The cover in Figure 1 is the current record holder for the $1 unwatermarked perf 10 Benjamin Franklin stamp (Scott 478). The first day is known to be Dec. 22, 1916, but the first documented use is May 24, 1917, on the parcel label piece shown. It has a certificate from the American Philatelic Expertizing Service (APEX) dated March 2, 2004.

On cover this stamp catalogs $3,000 (in italics indicating a stamp that can be difficult to value accurately). What would it cost as an EDU? We can only guess as it has not been sold since the certificate was issued.

A solo use of the 1918 $5 Franklin (Scott 524) on a registered cover to Denmark is shown in Figure 2. Scott does not provide a precise issue date for this stamp, but the catalog notes that it and the $2 (523) were issued in August 1918. The cover has registry backstamps from St. Paul, Minn., dated March 20, 1920. For some period of time, this cover was the record holder. It has a 2004 APEX certificate saying “EDU as of certificate date.”

The Scott catalog value for this stamp on cover is $2,500 (in italics). The EDU should be worth more.

Because the 1920 EDU was relegated to secondary status by the new claimant with a date over a year earlier, its value as the reigning champion has been diminished. Sic transit Gloria mundi! That said, I am grateful Scott continues to list the full cover as a runner-up.

These hundred years later it does not happen often, but it does happen, and it is a good reason for cover collectors to always check the date of use on early covers.

But what of those very early covers where there is no year date in the cancellation? And here is where Moore’s question comes in: “In reference to some of our early U.S. stamps and their earliest known uses, are the EKUs based on dated cancels or stamp/cover, or are some based on the contents of the cover like a dated letter, or docketing marks on the cover itself (such as ‘received/date’)?”

My immediate thought was that the contents may support the cancel, but I doubt anyone would certify an EDU based on the contents alone. Since contents and docketing can be created or swapped, it is a weak link.

But I expertize 20th-century material and have not been faced with this problem, so I asked friends at the Philatelic Foundation (PF) and APEX about their policies.

Lewis Kaufman at the Foundation responded: “Right now, the PF does not certify EKUs. Given the way new dates are constantly turning up, we did not believe it was prudent. Neither would we state ‘It is an EKU as of the date of the Certificate.’ What we do is simply state that the stamp is used on cover on a particular date. The recipient can then research the date and make a determination for himself.

“In addressing your query concerning contents, I guess I would say that such determination would be made on a case by case basis. It is entirely possible we have relied on contents to determine a date, but it is more likely positive support would come from a folded lettersheet to which the stamp has been affixed. Loose letters might be problematic, but again, case by case. I believe the only ‘maybe’ FDC/EKU that is listed is the Scott No. 7 [1¢ blue type II] affixed to a printed circular dated July 1, 1851.”

Gary Wayne Loew at APEX said: “I’ve had many occasions to speak with the members of the APEX Expert Committee on the subject of EDUs, both US and foreign. The consensus is clearly that our Expert Committee is reluctant to call anything an EDU without a cancellation confirming the day, month, and year. In the case of a cover, even that might not be sufficient if the stamp and the cancel are not directly tied.

“In expertizing, the certificates we all issue are defined as ‘opinions.’ Yes, we weigh the evidence and identify facts. But the conclusions we reach are still called opinions; they are not themselves facts. When there is uncertainty about a subject such as an EDU, we do not rely upon a ‘majority vote’ among the Committee members. If unanimity cannot be reached, I am very reluctant to declare something an EDU. While I strive to avoid issuing a No Opinion certificate, sometimes that is the most appropriate decision. This is especially true for APEX certificates, as we are the only ones who issue a guarantee with our certificates.”

Apropos of the last point, in my last expertizing column, I erred in saying that Philatelic Stamp Authentication and Grading Inc. (PSAG) offers a guarantee on its opinions.

J. Randall Shoemaker of PSAG wrote to say that item No. 5 in its terms of submission clearly states:

“Authentication and Grading is performed by PSAG staff, knowledgeable collectors and professional philatelists. These opinions are subjective and due to new information, may change from time to time. PSAG does not guarantee the accuracy of any opinion expressed by its Expert Committee regarding any item submitted for authentication and makes no warranty or representation and shall bear no liability whatsoever to the customer for the opinion or grade applied to any item.”

I regret the error.

In correspondence with Shoemaker, he also mentioned that an alliance with Harry Brittain has enabled a new PSAG service. Brittain, who holds a doctorate in physical chemistry, is a fellow of the American Association of Pharmaceutical Sciences and the Royal Society of Chemistry, and is a PSAG expert.

“Harry Brittain created the Center for Philatelic Forensics,” Shoemaker said. “His approach to color is to use infrared spectroscopy to identify the pigments in the ink of a stamp. After that, he uses optical microscopy (reflectance mode) to study the surface details of the pigment layers, comparing those of a reference to those of a patient. He has a full-scale reflectance spectrometer that acquires spectra in the visible region, and will eventually use this for better color evaluation.”

PSAG also announced that it “is now offering a 10% discount to all subscribers to Linn’s Stamp News for a basic PSAG certificate. This discount applies only to our basic minimum charge of $35 and does not include any additional discounts or our new forensic analysis charge which will be $5 per patient.”.