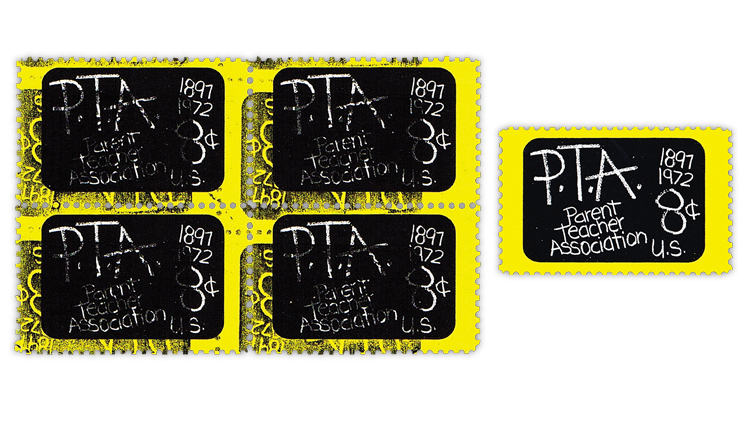 Beware the offer of a newly discovered error without an expert certificate. This block of the 1972 8¢ Parent Teacher Association commemorative with what looks like a doubled vignette (one inverted) was made on a photocopier. A normal stamp is shown for co

We often make an assumption that only expensive stamps are misdescribed, faked, altered or “improved.” Not so. For example, it is easy to miss the presence of a watermark. And much fakery can be accomplished in little time, such as adding perforations to a straight edge or making a coil from a slightly oversize stamp.

Sure, it is more profitable to fake, alter or improve expensive stamps, but there is a larger market for inexpensive stamps and they are less likely to be questioned.

Also, we each may have a slightly different definition of what “inexpensive” means.

But as a practical matter, the question is this: When does it make sense to pay an expertizing fee for a stamp with a value around the same amount or less than the fee?

John Dunn, who among his other accomplishments is a former bourse dealer, wrote a column titled About Value in a recent issue of the American Stamp Dealers Association’s magazine The American Stamp Dealer and Collector that suggests a novel way to approach this question. With his permission, I’m glad to pass along his advice:

“… if you are a low-price buyer, my advice to you is to check what you are buying. No matter who the dealer is, you should send an occasional item in for expertizing. Sampling is a basic procedure in any quality control program …

“This also holds true if you are a quality-first buyer. There may be a better chance you are getting what you pay for — but it does at time happen that a stamp may be misdescribed by the best of dealers.

“No one is perfect, so an occasional expertizing submission is still recommended. If you get back a clean certificate — clean meaning the stamp was as described by the seller — that will give you the extra assurance you need. And if it comes back with an undisclosed problem, it is time to submit another item …”

At a point where you reach a conclusion that a dealer is unreliable in describing his or her wares, you may want to take your business elsewhere.

In each monthly expertizing column for the foreseeable future, I will examine a stamp that is not what it seems to be. The objective is not to create distrust, but to recognize that knowledge is power.

The advanced state of photocopiers has brought us new capabilities and sometimes the lure to experiment can result in something less than desirable. The block of 1972 8¢ Parent Teacher Association stamps (Scott 1463) shown above is an example.

Initially offered as a doubled vignette (the central design), one of which is inverted, the block was suspect from the start.

There are no such genuine errors of this 1972 issue known, and, if any had been discovered, they would have generated a lot of publicity.

So, given some thought, the answer in this case was obvious: A photocopier was used.

To create this or a similar “error,” you take two panes of stamps, put one on the photocopy bed and the load the other on the paper tray, and then hit the start (or copy or print) key. Voila, you have just made your own error.

In the case of the 1972 stamp, the yellow frame won’t copy if only black-and-white copying is chosen.

Happily, in this instance, the experimenter after the initial pitch was honest in admitting the block was a machine-made curiosity, but others may not be as truthful. So, beware when something is offered that has never been reported as a genuine error and that does not have a certificate of authenticity.