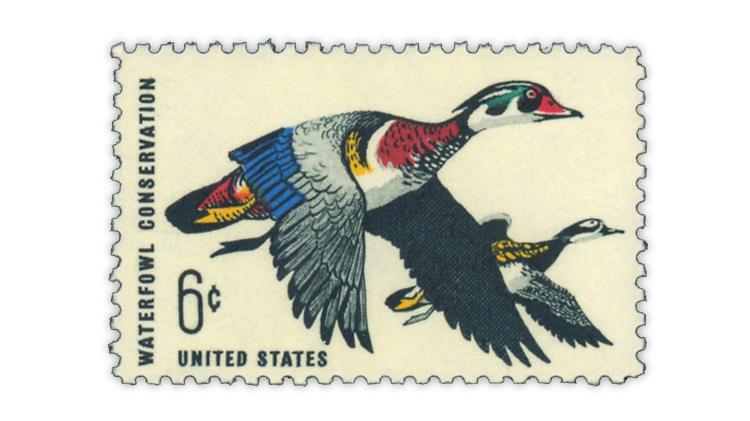 This tagging-omitted error of the United States 1968 6¢ Waterfowl Conservation stamp was recently reported by Professional Stamp Experts, which issued a certificate of authenticity for the new error on Sept. 19. 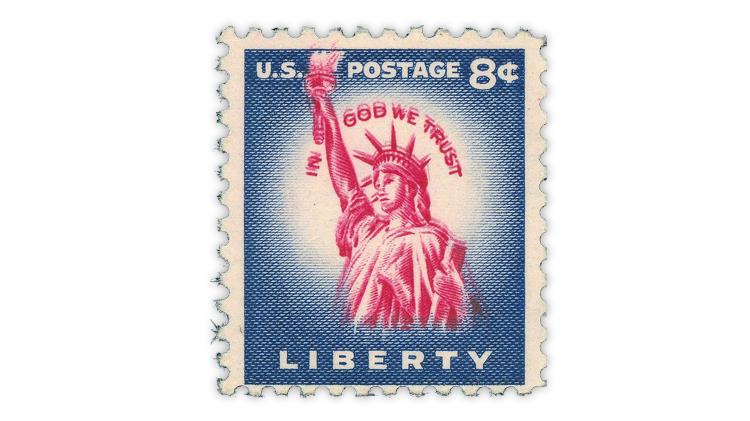 Professional Stamp Experts also reported and expertized a double impression of the carmine ink on the rotary press printing of the 1954 8¢ Statue of Liberty stamp. The doubling is seen in the vignette showing the statue and the words “IN GOD WE TRUST.”
Previous
Next

The first is a tagging-omitted error of the 1968 6¢ Waterfowl Conservation stamp (Scott 1362). The error is shown here under normal light.

Tagging is visible under shortwave ultraviolet light. It is the phosphor material on stamps used to activate automatic mail-handling equipment.

Tagging may be lines, bars, letters, part of the design area or the entire stamp surface. It may also permeate the stamp paper.

The second printing mistake is a double impression of the carmine ink on the rotary press printing of the 1954 8¢ Statue of Liberty stamp (Scott 1041B). The doubling appears in the vignette (central image) of the statue and the words “IN GOD WE TRUST.”

According to Murphy, the tagging-omitted Waterfowl Conservation stamp “was discovered in a hoard that a local Las Vegas dealer acquired two and a half years ago.”

“He sells modern singles on the internet and was breaking down the collection, routinely checking tagging on all stamps, when he found it,” Murphy said.

Professional Stamp Experts issued expertizing certificate No. 01416105 for the stamp on Sept. 19, he said.

The owner of the double-impression error of Scott 1041B submitted the stamp to Professional Stamp Experts believing it to be an example of the double impression of carmine error on the flat plate printing of the 1954 8¢ Statue of Liberty stamp (Scott 1041a).

“We determined that it was [Scott] 1041B with the carmine clearly doubled,” Murphy said.

“PSE does not reveal submitter information without their permission, so we do not know when the item was acquired or discovered,” he said.

Murphy put Linn’s in touch with Robert Keywork of New York, the owner of the new double-impression error.

He was initially skeptical but decided to buy the stamp after the seller told him it was acceptable to have the stamp expertized as a condition of purchase.

Expertizing certificate No. 01416682 has been issued for the new double-impression error, Murphy said.

“When I compared the height of the stamps in the 1041 plate block with my [stamp], it was very clear that mine was taller which confirmed to me that I did indeed have a 1041B variety.”

Based on the findings of Professional Stamp Experts, both errors will be listed for the first time in Vol. 1 of the 2024 Scott Standard Postage Stamp Catalogue, which is scheduled for publication in April 2023.