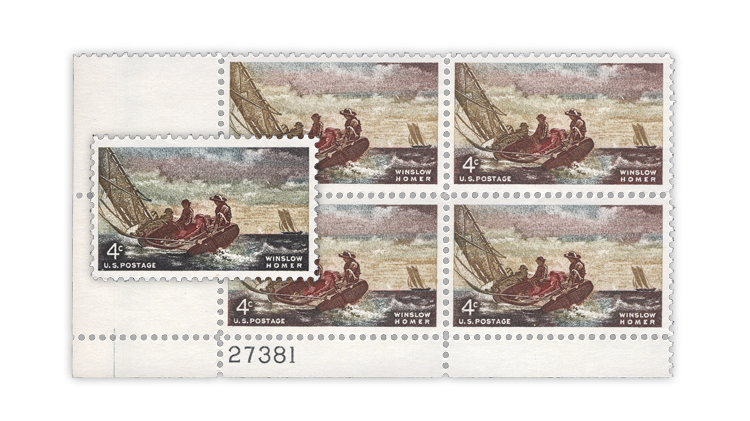 The lighter stamps in the plate block of the 1962 4¢ Winslow Homer stamp were advertised many years ago as a rare color-missing error. The normal single superimposed on the left pair of the block shows that the plate block stamps are different.

Look at the plate block shown here and compare it to the darker version of the single stamp, also shown superimposed over the left pair of the block. When first bought to the marketplace, the lighter version seen in the plate block was misdescribed in a 1971 advertisement in Linn’s.

The ad shows the stamp in black-and-white with “MAJOR PRINTING ERROR” above the stamps and “4c Winslow Homer (#1207)” and “The Last 4c U.S. Commemorative Issue!” in two lines below it.

The rest of the ad says:

“After purchasing a sheet of the Winslow Homer stamp in December, 1962, a lucky collector found that he was the proud owner of a most spectacular printing error, for all his copies were brown where the black color would normally be visible. In fact, even under the highest powered magnification, only the most minute traces of black could be seen in some areas of the water. In order to avoid a Government reprint like the one which had occurred just a few months previously in the unfortunate case of the [Scott] #1204 Dag Hammerskjold invert, our collector quietly held his rare find and exercised great patience by waiting until now, nine years later, to dispose of this modern classic.

“The finder has retained the bottom plate number strip of 10 for his own collection and we are proud to now offer the remainder of this rare sheet on a first-come first-served basis until the obviously modest stock is exhausted.

“This printing error is so spectacular in appearance that there is no way to convey its magnificent contrast to the normal variety through either words or black and white picture. For the seriously interested buyer who wishes to inspect before making a purchase, we will send a full color comparison photo for $1.00.

“We have already enjoyed substantial and enthusiastic private treaty sales with this rarity, and to avoid disappointment, we advise a phone call to reserve your purchase. Single $375.00. Block of four — Price on request.”

Luckily, Linn’s is printed in color these 50 years later, so you can see the difference between the lighter and darker versions. But if you go to the Scott Specialized Catalog of United States Stamps and Covers to see what this rarity is worth today, you will not find a missing color listed. Why not?

A clue is found …

To read the rest of this article, subscribe to Linn’s Stamp News.

A question of dollars and cents