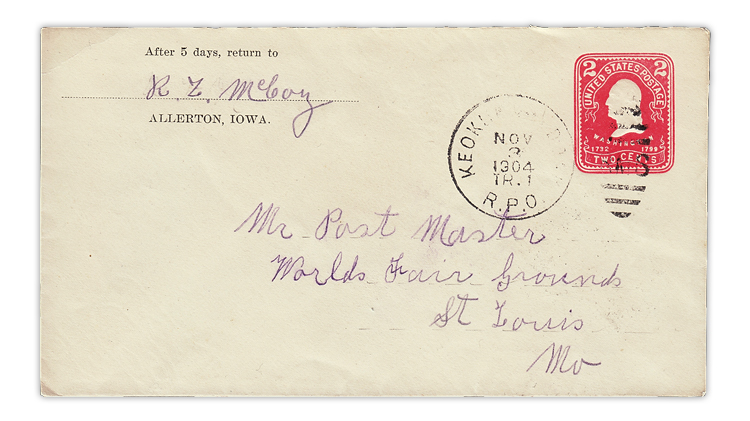 The July 8 issue of Linn’s Stamp News just landed on the presses and goes in the mail to subscribers Monday, June 24. And if you subscribe to Linn’s digital edition, you’re at the head of the line with early access Saturday, June 22. Here are three stories you won’t want to miss.

Wayne Youngblood has a soft spot for the St. Louis World’s Fair of 1904. In The Odd Lot, he features two covers tied to the fair. One of them was sent to the fair’s postmaster, and the other was sent by a fair visitor staying at the only hotel located on the fair grounds. Read the entire column to learn what caught Youngblood’s eye about the second cover.

Collectors who visited the Royal Philatelic Society London booth at the Stockholmia 2019 show held May 28-June 2 were treated to a demonstration of the capabilities of a video spectral comparator that the Royal’s expert committee uses to analyze stamps and covers. Scott catalog managing editor Tim Hodge was there, and his report is a must-read.

The varied but brief existence of USPOD Form 1513

Modern U.S. Mail columnist Tony Wawrukiewicz discusses how the U.S. Postal Office Department used Form 1513 to indicate “that a first attempt at delivering a parcel had been unsuccessful.” The form also was used to collect postage due on mail that was held. Wawrukiewicz illustrates three such examples.