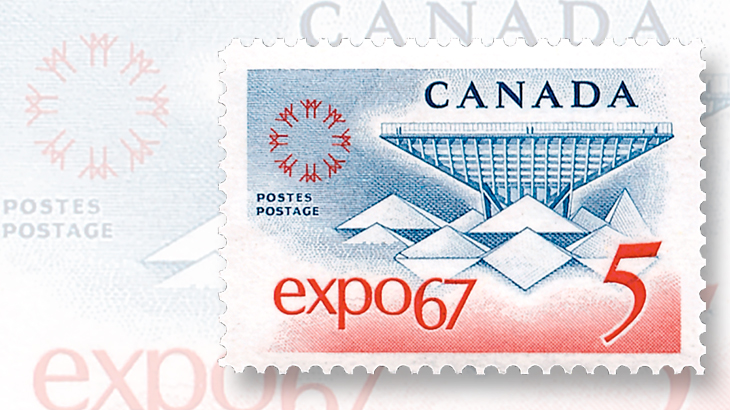 Canada celebrated the arrival of its first world’s fair in its centennial year with this 5¢ blue and red Expo 67 commemorative depicting the logo and Canadian pavilion at the fair, issued on its opening day, April 28, 1967. 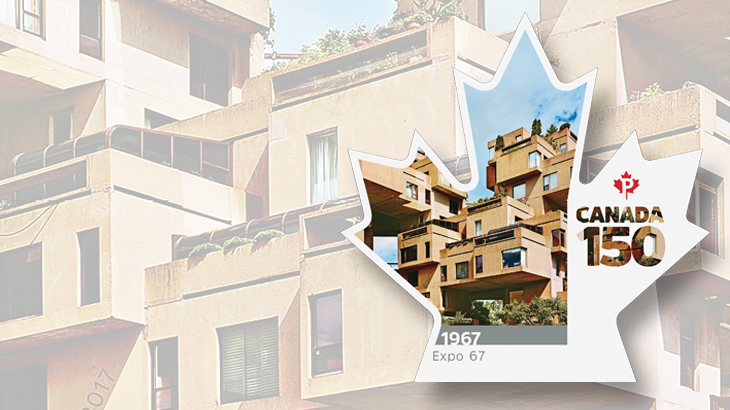 Unveiled April 27, but not to be issued until June 1, this Canadian nondenominated domestic-rate stamp depicts Habitat, one of the futuristic-looking structures that amazed record world’s fair crowds at Expo 67 in Montreal from April 27 to Oct. 29, 1967.
Previous
Next

Unveiled live and on social media April 27, a Canadian stamp commemorating Expo 67, the world’s fair that opened a half-century ago, will be the first of 10 stamps celebrating the 150th anniversary of Canadian nationhood.

Canada Post is revealing the designs of all 10 in a sequence of events throughout Canada during May, and on June 1, when the final design will be revealed and all 10 will be issued together.

Canada Post intends the 10 stamps to “capture unforgettable moments of the last 50 years” as part of the Canadian sesquicentennial.

Held on islands extended and installed in the St. Lawrence River at Montreal, Quebec, the 900-acre site hosted pavilions from 60 nations during Canada’s centennial year of 1967, and is widely regarded as the most successful world’s fair of the last century, with more than 50 million visitors — two and a half times Canada’s national population at that time — during the six months it was open.

The stamp pictures one of the few distinctive Expo 67 structures still in place today: the adjacent Habitat 67 modular housing complex.

Architect Moshe Safdie returned to the iconic structure for which he might still be best known to unveil the design as the first stamp in the new series to be dedicated by Canada Post. Canada Post also put up a short YouTube video on the stamp and its significance.

A 31-year-old architecture graduate of Montreal’s McGill University, Safdie was a Syrian Jewish emigrant from Haifa who patterned the housing complex on his thesis at McGill.

Vetted not only by his former McGill colleagues but also by Canadian Prime Minister Lester Pearson and Minister of Finance Mitchell Sharp, Habitat was purchased by private homeowners after Expo 67.

The stamp was designed by Roy White and Liz Wurzinger of Subplot Design Inc. in Vancouver, British Columbia, and printed by the Lowe-Martin Group.

According to Canada Post, “Each of the 10 maple leaf-shaped die-cut Permanent domestic-rate stamps measures 40 mm by 40 mm and is printed in 6 colours plus tagging.”

A total of 10,000 packs of 10 official first-day covers, one for each stamp design and each canceled in Ottawa, also will be made available.

The official first-day cover for the Expo 67 stamp depicts the Habitat 67 housing complex superimposed on an envelope showing a wide variety of colorful memorabilia and promotional ephemera made for use at Expo 67. Sets of 10 FDCs are available for preorder for $16 as Canada Post item 414048131.