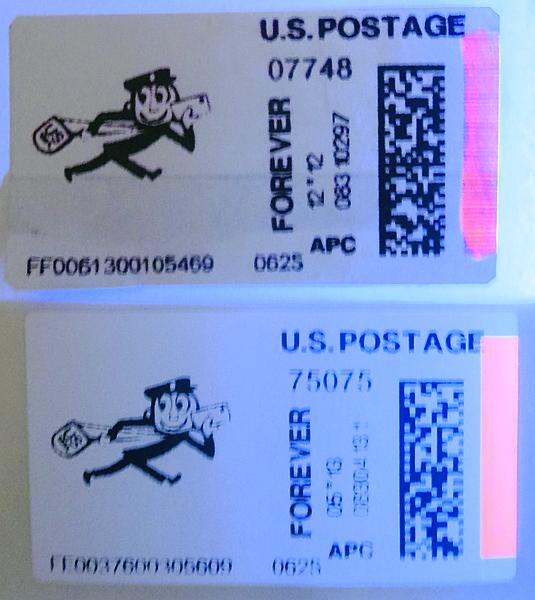 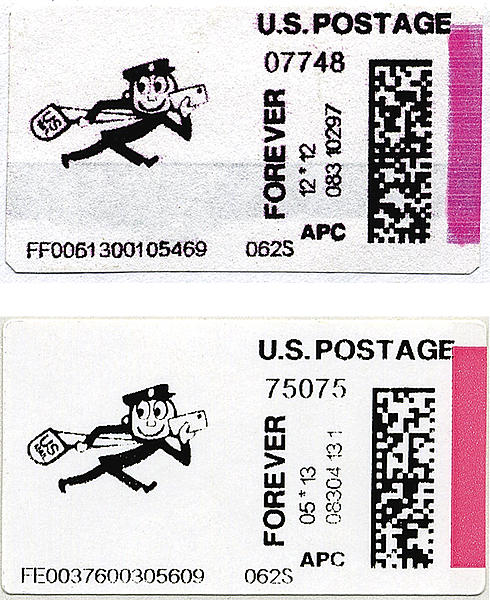 Figure 1. A counterfeit APC stamp featuring Mr. ZIP is shown at top with an authentic example of Scott CVP86 below. Note the tagging stripe differences between the two. Also, the counterfeit has clipped corners, making it look like it

Peter Elias can well remember when he spotted his first counterfeit stamp.

“The second I took it out of my post office box it caught my eye,” said the Plano, Texas, collector.

“The key thing was the color of the stripe.”

It should have been red, but it was pink, a sure sign to Elias that someone was counterfeiting the postal indicia that are sold in thousands of post office lobbies.

Since then, Elias has seen a number of faked indicia, which he has dutifully reported to the United States Postal Service.

Some of these are the postage labels featuring the Mr. ZIP design that are sold in the Automated Postal Center machines found in many post office lobbies. One was a fake Stamps.com postage label.

Sometimes postal clerks have approved the use of counterfeits on parcels they are handed to weigh, he says. The fakes are so good that few clerks seem to spot them.

As member of the Meter Stamp Society, Elias sees the fake computer-generated stamps as a serious threat to the revenues of the financially beleaguered agency.

“My worry is that the average person has the means to do this, and the dollars involved aren’t great,” he said.

But the people who are duplicating these simple stamps need to be “scared straight,” he said.

“Is saving 49¢ in postage worth going to jail?” he asked.

Because the dollars in such cases seem small, Elias fears that U.S. Postal Inspection Service isn’t taking the crimes seriously.

One of the leading authorities on counterfeit U.S. postage stamps thinks Elias may be on to something.

“The answer is yes, we are being killed, and it is not simply with PC postage,” said Howard K. Petschel, a retired postal inspector from Sandpoint, Idaho.

“As fast as we come out with a new postage product, someone is duplicating it,” said Petschel, who wrote the manual on how to detect counterfeit stamps for the USPS Postal Inspection Service.

He has published three books on counterfeit stamps, most of which focus on what he’s called “The Perfect Crime” of reproducing U.S. postage stamps.

But in Inked Print, one of his latest two books, he cited the 2010 case of an Orchard Park, N.Y., man who was sentenced to 33 months in prison and ordered to pay the Postal Service $345,000 for producing fake Stamps.com stamps, which he sold via the Internet.

In a recent New Mexico case, an Internet bookseller who also copied stamps he purchased from Stamps.com stipulated that his forgeries cost the USPS $365,827.

Elias worries that postal inspectors do not see the fakes he has found as representing losses that are significant.

“I’m sure that from the U.S. Postal Inspection Service perspective, this is ‘small potatoes,’ perhaps a loss of $100 or $200 dollars in postage, versus the thousands it would cost to fully investigate this,” he told Linn’s in an e-mail.

Officially, the Inspection Service takes all counterfeiting stamps seriously, Lori J. McCallister, a spokeswoman for the inspection service, told Linn’s in a statement.

“The Inspection Service takes any attempt to counterfeit stamps as a serious crime,” she said, citing 18 USC § 501, which states “whoever forges or counterfeits any postage stamp … shall be fined or imprisoned not more than five years.”

“The Inspection Service works closely with USPS to ensure measures are in place to easily identify counterfeit stamps,” she added.

She did not respond, however, to questions about Elias’s concerns over the threat this new wave of counterfeiting stamps generated by personal computers could pose.

“The homemade stuff is bad enough, but I suspect the real challenge is what may come from overseas,” he said.

“Can you say China and North Korea? Their material is so good it virtually defies detection — but then who is even looking at it?

That’s his way of saying the Postal Service does not appear to be looking seriously at stamp counterfeiting.

“If you do not look for it, you will not find it.

“If you have not found it, it does not exist.

“If it does not exist, it is not a problem,” Petschel said.

Petschel said he was told about a year ago that the Click and Ship service that allows customers to print postage for packages on their home computers had cost the USPS about $10 million in postage revenue.

Another former postal inspector told Linn’s that one issue that has perplexed stamp counterfeiters is their inability to recreate the phosphorous-treated paper on which U.S. stamps are printed.

Stamps lacking the properly treated paper will not “glow in the dark,” and such stamps are subsequently rejected by mail-processing machinery.

“One thing to remember is that this story is far from over,” he said in More Stamp Counterfeiting: The Perfect Crime.

“I hope the search for bread crumbs will go on, for as long as stamps have value, individuals will copy them. It’s human nature.”

Elias believes the inspection service should simply send “cease and desist letters” to some of the small-time counterfeiters whose products he has been finding on the mail.

“In the meantime, I’m getting some interesting material together for future articles and a mini-exhibit,” Elias said.