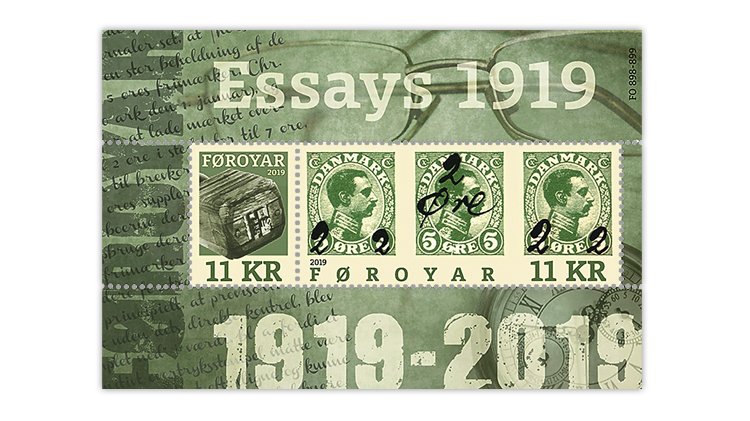 The Faroe Islands commemorates the 100th anniversary of provisional stamps on this souvenir sheet issued Jan. 11. The two stamps in the sheet show essays (right) and part of the chair leg used as a handstamp to create the provisionals (left).

The Faroe Islands celebrates the 100th anniversary of stamps known as the “Chair Leg” provisionals on a souvenir sheet issued Jan. 11.

Now an autonomous, self-governing region of the Kingdom of Denmark, in 1919 this archipelago in the North Atlantic was still a county of Denmark and used Danish stamps.

Because of a Jan. 1, 1919, increase of the basic letter rate from 5 ore to 7 ore, 2-ore stamps were needed in the Faroe Islands. The first solution was to bisect 4-ore stamps, but the post office at Torshavn soon ran out of these.

The Torshavn postmaster, Rasmus Kristensen Pilgaard,was then given permission to add a 2-ore surcharge to existing 5-ore stamps (Denmark Scott 97).

Alvur Danielsen, in writing about the new souvenir sheet for the Posta Faroe Islands’ website, explained what happened next: “Due to Pilgaard‘s absence, it devolved on Godskesen Andersen, the deputy commander of the post office, to come up with a solution. He made a draft of how an overprint could be implemented … The printers at Dimmalaetting rejected the task — probably due to time constraints, but they gave Andersen the single character types 2, Ø, R and E which could [be] used in the overprint.

“Having secured these types, Godskesen Andersen instructed master carpenter Peter Poulsen to embed them in a chair leg. This is how we got the chair leg overprint. It was first used on Monday, January 13, 1919, according to Godskesen Andersen’s own account several years later. One sheet of 100 stamps was overprinted at a time. They were, however, never sold without being cancelled by the post office! In total 155 sheets of 15,500 stamps, were overprinted in this way.”

The new souvenir sheet contains two 11-krona stamps with “Essays 1919” in the selvage above them and “1919-2019” below. The smaller of the two stamps, 21 millimeters by 28mm, depicts the bottom of the chair leg used to create the overprint. The other stamp, 63mm by 28mm, shows three essays that were submitted to the printer.

The Faroe Islands previously featured a stamp-on-stamp design of the “Chair Leg” provisional on a 1979 Europa stamp (Scott 44). The other stamp in the set (43) shows the bisected 4-ore stamp.