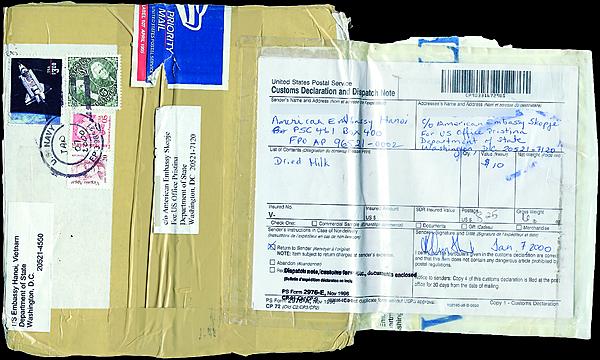 An interesting story lurks behind this parcel that was sent in early 2000 from the United Statesembassy in Hanoi, Vietnam, to the U.S. embassy in Skopje, Macedonia.

One of the joys of writing this column is hearing from collectors who have items with an interesting story to tell.

Pictured nearby is one such piece of postal history.

From Skopje, the parcel was transported to its recipient in Pristina, Kosovo.

Bruce Beardsley of Florida shared the story of the cover with me, and I liked it so much that I now pass it on to you, dear readers.

“As a United States Foreign Service Officer in the twilight of my career,” Beardsley told me, “in 1999 I requested an assignment to assist Kosovar refugees.

“That was granted, and on short notice I moved to Skopje, Macedonia.

“Shortly after the NATO bombing campaign ended I moved to Pristina to coordinate refugee assistance and also open the U.S. office, which subsequently became the U.S. embassy.

“We were thinly staffed at first, but new officers came trickling in, including one directly from our embassy in Hanoi.

“Personal mail was periodically brought to Pristina from Skopje by vehicle.

“One day in early February 2000, I spotted a box on the floor with dollar-value U.S. postage stamps.

“Before it was opened I asked the addressee to open it carefully and give the box to me.

“For a while I kept the box intact, but that proved impractical in our strained living situation, so I removed the part of the box without philatelic markings and kept what you see.

“While the stamps are nice, to me it is the unusual usage: A six pound box travelling from one former conflict zone to another via the Fleet Post Office (FPO) used by the embassy in Hanoi.

“The return address label for the package is ‘Department of State, Washington DC 20521-4550’ (the 4550 being the ‘plus four’ indicating the embassy in Hanoi).

“The sender’s return address on the customs declaration is the FPO which Hanoi used.

“I don’t know when personal mail to members of our embassy in Hanoi switched from being sent via pouch to FPO.

“The address of the recipient is via pouch to the embassy in Skop­je.

“At that time, Skopje provided many of the administrative and consular services for Kosovo.”

Two U.S. embassies, postally connected during a time of conflict, make for a great piece of postal history.