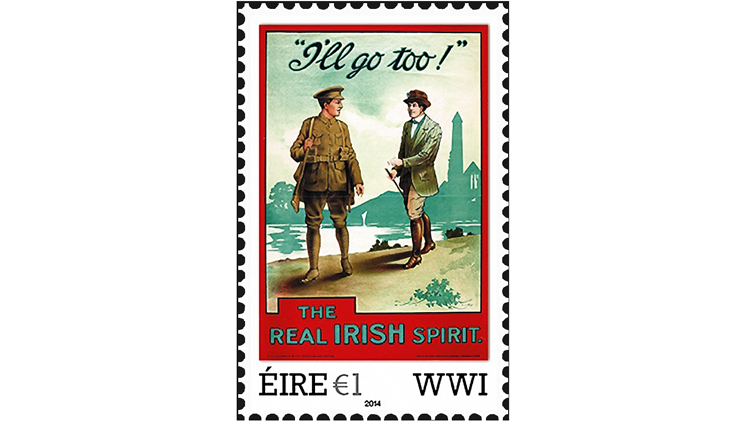 A World War I recruitment poster is pictured on the stamp voted as Ireland’s favorite stamp issue of 2014.

A stamp featuring a World War I recruiting poster was voted as Ireland’s favorite stamp issue of 2014, according to an announcement by An Post in the second 2015 issue of its publication Irish Stamps the Collector. The entry form to vote in the poll was included in the first 2015 issue of the publication.

The €1 stamp was one of two stamps issued June 24, 2014, in a set called Recruiting Irish Soldiers for the Great War. The poster, titled “The Real Irish Spirit,” shows a soldier and another man in the foreground and Irish ruins in the background.

The National Library of Ireland reports that 7,500 of these posters were issued by the Central Council for the Organization of Recruiting in Ireland. The poster was printed by McCaw, Stevenson & Orr Ltd., Dublin and Belfast, in 1915.

The other stamp in the set, which bears a denomination of €0.68, features a poster titled “Join an Irish Regiment Today.” Issued by the Central Council for the Organization of Recruiting in Ireland, this poster pictures Irish politician John Edward Redmond.

In reporting why people selected the €1 WWI stamp as the best issue of the year, An Post included the following two quotes: “This stamp sums up why so many young men (some of my family) went to war. Their friends went — and so did they!” and “Evoked reflection of the hardships endured during WWI.”