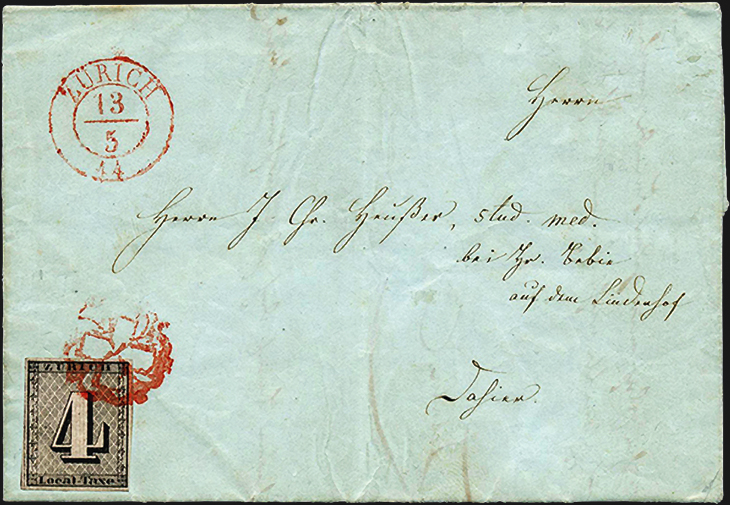 An 1844 folded letter franked with the Zurich 4-rappen black stamp from 1843, canceled with the red Zurich rosette. The cover is offered in the upcoming Christoph Gaertner auction. 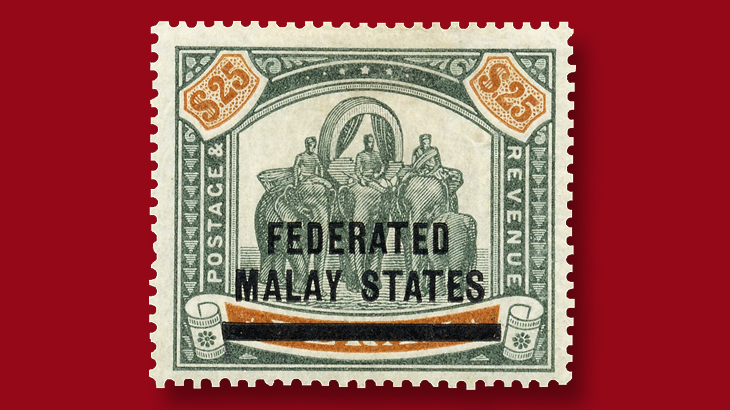 This rarity from 1900 is a key issue among the classic stamps of the Federated Malay States. This unused overprinted $25 Elephants and Howdah stamp is featured in the Christoph Gaertner auction taking place Feb. 19-23. 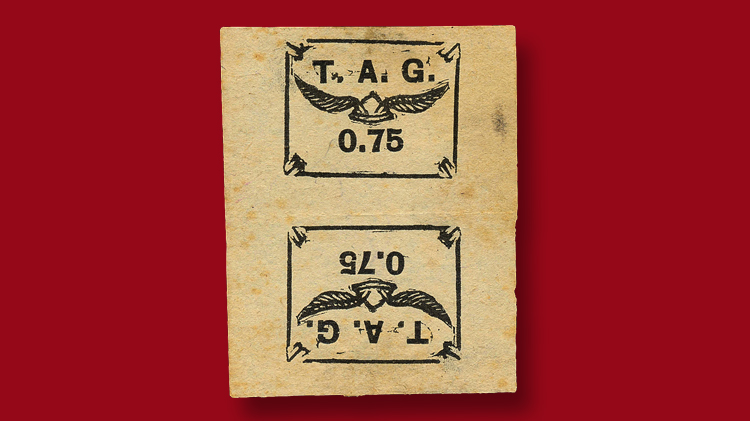 A rare vertical tete-beche example of the 1921 T.A.G. stamp from French Guiana, issued for the Societe de Transports Aeriens Guyanais. Fewer than four unused examples of the 75-centime black on grayish paper are known according to Gaertner, citing expert
Previous
Next

The next auction from Christoph Gaertner in Germany extends over the course of five days and features specialized catalogs of Asia and Malaya, as well as its usual strong presentation of Germany and area, and general worldwide stamps, covers and collections.

The two specialized groupings open the auction series with consecutive presentations on Feb. 19. In the days that follow, Gaertner will offer thematics, worldwide (including Europe, airmail and ship mail), more than 6,000 lots of Germany and area, and two days devoted to large lots, collections and literature.

A fabulous 1931 cover from Ulaanbaatar, Mongolia, is offered, franked with the imperforate 10-mung-on-10¢ stamp with its surcharge inverted, plus six of the perforated 20m-on-20¢ surcharged stamp, and an overprinted 50¢ brown and olive yellow stamp. Chinese blue postage due stamps, one 10¢ and a strip of three 30¢, are affixed to the reverse.

The front of the cover shows bold clean strikes of the registered marking and an airmail handstamp. The cover is listed with a starting bid of €10,000 (approximately $12,480).

One highlight among many in the Malaya sale is an unused 1900 $25 green and orange Elephants and Howdah stamp from Perak, overprinted with an obliterator and the name “Federated Malay States” (Malay Scott 13A).

Among the early Federated Malay States issues, the $25 overprinted stamp is highly prized and is listed in the 2018 Scott Classic Specialized Catalogue of Stamps and Covers with a value of $16,000. The example on offer, accompanied by a 2006 certificate from the American Philatelic Expertizing Service, opens at €5,000 ($6,240).

The Gaertner auctions are rich in postal history offerings, including an 1844 folded letter from Zurich franked with the 1843 4-rappen black cantonal issue (Switzerland Scott 1L1). The stamp is tied with the red Zurich rosette marking, and the cover is also marked with a clean strike of the Zurich double-ring postmark in red dated “13/5 44.”

A 2017 certificate of authenticity is included with this cover, which Gaertner describes as bearing one of the top examples of this stamp rarely seen on cover. It opens with a bid of €20,000 ($24,960).

An unusual and rare 1921 tete-beche pair of 75-centime stamps from French Guiana offered through this auction are from a printing created for flights from Cayenne to St. Laurent du Maroni, somewhat akin to United States airpost semi-official stamps.

The black on grayish T.A.G. stamps for the Societe de Transports Aeriens Guyanais (Scott CL3) are rare unused, with “less than four” known according to Gaertner (citing the expert Pascal Scheller). This pair opens at €12,000 ($14,970).

The listings for the Gaertner auction are posted online, with online bidding options available.