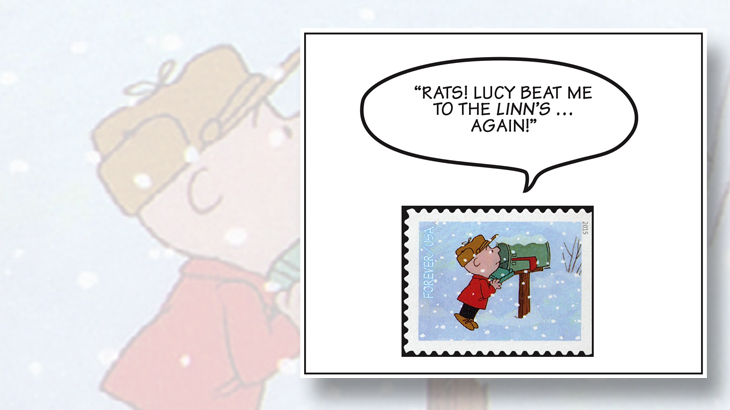 No doubt that the Peanuts comic strip enjoys great popularity, but I was surprised to receive about twice the normal number of entries for the February cartoon caption contest featuring the stamp from the 2015 A Charlie Brown Christmas issue showing the ever-forlorn Charlie Brown peering into his forever-empty mail box.

By far the most popular subject of the entries was the whereabouts of the flighty Woodstock.

Bob Bialo of Cary, Ill., sent in this line: “Good grief, Woodstock! Do you really think that a booklet of Peanuts stamps will pay your passage south?”

Many other themes also were represented in the multiple entries. Several examples follow.

“I’d like a double cheeseburger, large fries, a chocolate shake, and one pane of Charlie Brown stamps … To go,” sent in by Toni Heisey of Janesville, Calif.

“Oh, rats! My tongue is stuck on the mailbox!” by Larry Snyder of Lewisburg, Ohio.

“I wonder if I’ll find any of ‘my’ stamps in the mail?” from Chuck Vukotich of Pittsburgh, Pa.

The philatelic-line winner plays off the tension between Charlie Brown and Lucy, who always seems to be a step ahead of him. It was sent in by Dale Schubert of Lawrenceville, Ga.

On the nonphilatelic side, the winner is David D’Hondt of Sun City, Calif., who reflects on the upward trend in political mailings at this time in the presidential-election cycle, with “It must not be an election year.”

“I was hoping for an acceptance letter for that job with the post office. After all, I told them I work for Peanuts!” by Steve Kotler of San Francisco, Calif.

“What, No Valentines card! I better check my emails!” by Marvel Houge of Estherville, Iowa.

“All this dust … The letter must be from Pigpen,” sent by Laura and Tom Tomaszek of Cedar Rapids, Iowa.

“A Valentine with postage due?!! Guess the Little Red-Haired Girl is playing hard to get,” from Ronald McKitrick of Yakima, Wash.

“I need to hide my football from Lucy. Wonder if it will fit in here?” by Dave Epps of Union City, Calif.

The next cartoon caption contest will be announced in the March 14 issue of Linn’s.