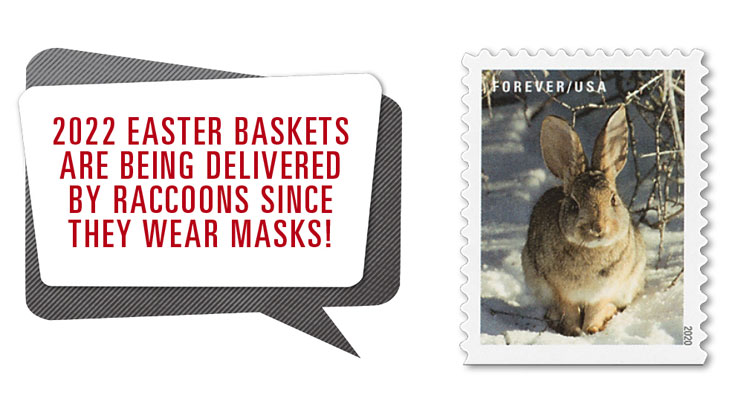 The winner of the nonphilatelic part of the February cartoon caption contest featuring the Rabbit stamp from the 2020 Winter Scenes block of 10 is Ben Termini of Fort Worth, Texas, who plays off the disappearing COVID-19 mandates. The next U.S. Stamp Note

Hare mail and hair (or hare) raising were the two predominant themes in response to the cartoon caption contest design for February, featuring the rabbit on the 2020 Winter Scenes stamp (Scott 5539).

Many of these entries were combined with evaluations of the current state of the United States Postal Service. An example is “The dismal future of the Postal Service is hare raising!” from Dave Schwartz of Commack, N.Y.

An unusual approach was submitted by Frank Schmitt of Rockford, Ill., “Had the Board of Governors done due diligence, we could be talking about ‘hare mail’ now rather than ‘snail mail’.”

The next most-used theme was the well-known proclivity of rabbits to reproduce in quantity. Josh Tanski of Vartsburg, N.Y., represents this group with “Actually, our flag stamps seem to multiply faster!”

Vernon Kleen of Springfield, Ill., is one of several readers who sent a line based on the “Tortoise and the Hare” story, one of Aesop’s fables. Kleen has the rabbit saying: “A little bit of snow doesn’t bother me! Where’s that turtle?!”

The winner of the best nonphilatelic line, Ben Termini of Fort Worth, Texas, was one of the few that referenced COVID-19 but did so with cleverness.

On the philatelic side, the winner is Reid Hinson of Kill Devil Hills, N.C., with “Pssst … I’ve got an uninverted Jenny in my rabbit hole. Wanna see it?”

“I get great reception with these rabbit ears, but can’t fit a TV in my hutch,” by Daniel Winester of Longmont, Colo.

“Hmmm. Is that a camera or a gun? I hope he’s not thinking rabbit stew,” from Mitchell Zais of Columbia, S.C.

“The USPS needs staff who will hop to it. Reckon I can get a job there?” sent by Mary Lou Moseley of Owensboro, Ky.

“My name? Jack. What else!” by Jack Leonard of Hatboro, Pa.

“When you’re done taking the picture, can I borrow your earmuffs, please,” from Jay Morgan of Fort Worth, Texas.

“Eat your heart out Bugs. I’m on a forever stamp and your only good for 32¢,” by Sid Morginstin of Trenton, N.J.

“You humans aren’t the only ones looking forward to Spring!” from Judy Ireton of Anchorage, Alaska.

Thanks and a tip of the hat to all who entered. The next contest will be announced in the April 11 issue of Linn’s.