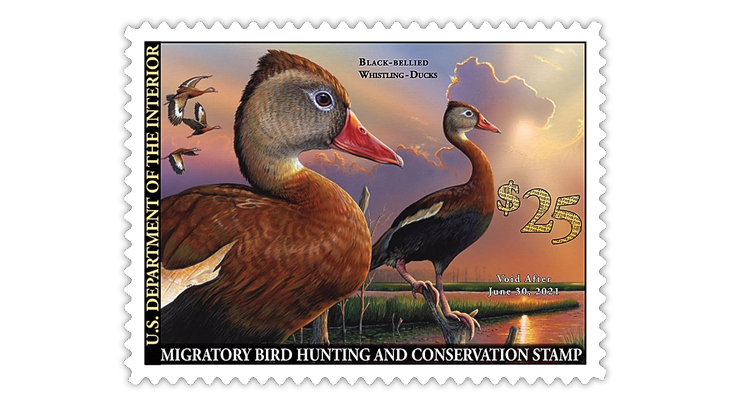 Preliminary artwork for the 2020 federal duck stamp that will be issued June 26. The issued stamp will feature the painting of black-bellied whistling ducks by wildlife artist Eddie LeRoy, but other design elements might differ.

The United States Fish and Wildlife Service will issue its newest annual federal duck stamp on June 26. The design of the $25 stamp shows a pair of black-bellied whistling ducks as painted by Alabama wildlife artist Eddie LeRoy.

The U.S. Fish and Wildlife Service revealed June 8 that the first-day ceremony for the duck stamp had been postponed and indicated another event could take place at a later date. The federal duck stamp will go on sale June 26 as planned.

In previous years, the artist whose work is featured on the newly released federal duck stamp has participated in the event, as well as the most recent winner of the junior duck stamp competition.

The stamp also provides “a free pass into any national wildlife refuge that charges an entry fee,” according to the Fish and Wildlife Service.

Though it is not valid for postage, the stamps are sold by the U.S. Postal Service at post offices (in single-stamp panes only) and through its Stamp Fulfillment Services division. They are also available at selected national wildlife refuges and sporting goods retailers and from Amplex Corporation.

Similar to last year, the new stamps are offset printed by Ashton Potter USA Ltd., in two self-adhesive formats: a pane of one and a pane of 20.

The preliminary artwork pictured here shows microprinted lettering FWS throughout the $25 denomination, but Fish and Wildlife Service officials advised that the illustration released is not the finished artwork for the 2020 stamp.

“For every dollar you spend on Federal Duck Stamps, ninety-eight cents goes directly to purchase vital habitat or acquire conservation easements for protection in the National Wildlife Refuge System,” according to the Fish and Wildlife Service.

As a result, 6 million acres have been acquired from stamp revenues since the program began in 1934.

LeRoy’s win in the 2019 competition for the 2020 stamp is his first, though his paintings have appeared on Alabama state duck stamps issued in 1999, 2005 and 2015, and the South Carolina migratory waterfowl and hunting stamp in 2004.

On the June 26 issue date, a new junior duck stamp also will go on sale. The $5 stamp will show a wood duck painted by 13-year-old South Dakota artist Madison Grimm.

This story was updated June 10 to clarify that the first-day ceremony for the federal duck stamp would not take place June 26, but that the stamp will go on sale on that date.