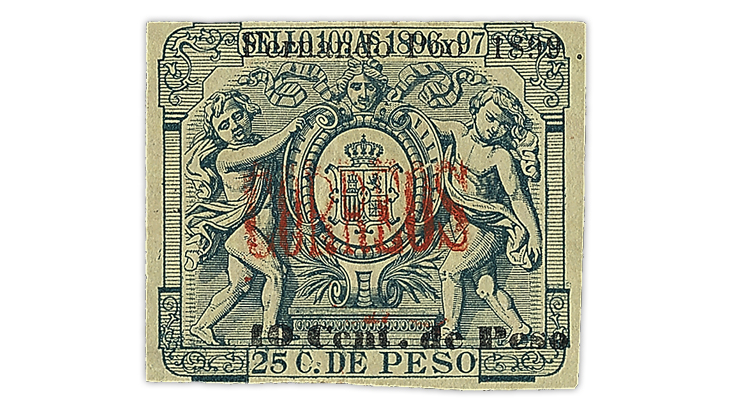 The Fernando Po 1899 10 centavos-on-25c revenue stamp overprinted and surcharged for postal use is a good buy at full Scott Classic Specialized Catalogue of Stamps and Covers 1840-1940 value.

The volcanic island of Fernando Po, located in the Gulf of Guinea 20 miles west of the coast of Cameroon in western Africa, was named after the Portuguese explorer Fernao do Po.

With a population of about 335,000, today it is known as Bioko, and it is the northernmost province of Equatorial Guinea.

After Spain gained control of the island in 1844, it began issuing stamps for the colony in 1868. The last Fernando Po stamps were issued in 1968 when Equatorial Guinea became independent.

In 1899 when supplies of 10-centavo and 15c postage stamps were running low, Spanish imperforate revenue stamps were overprinted and surcharged for postal use (Scott 41-43A).

Look for the 10c-on-25c stamp overprinted in red and black (Scott 42). The design of the basic revenue stamp is quite eye-catching with the royal Spanish crest flanked by draped cherubs and scrollwork. The country name and date overprint and value surcharge are in black ink, while the “Correos” overprint is in red ink.

The Scott Classic Specialized Catalogue of Stamps and Covers 1840-1940 values the 10c-on-25c stamp at $120 in unused, original gum condition and at $65 in used condition.

This is a scarce stamp. Don’t expect very fine grade, but a nicely centered stamp without faults would be a good buy at full Scott catalog value.

Examples with forged overprints exist, so expertization by one of the recognized services is a good idea.