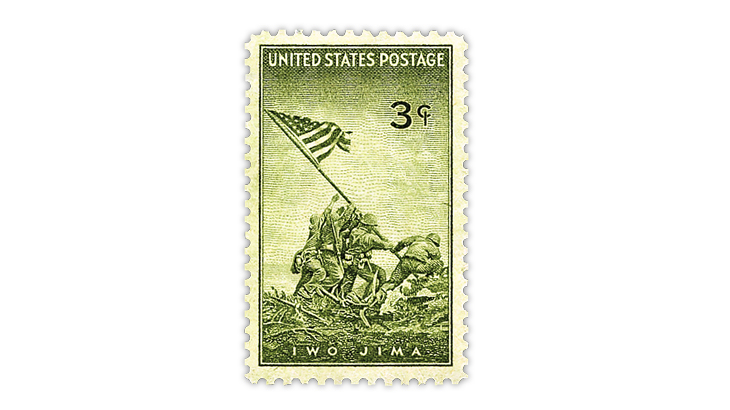 Stamps turn up periodically as a category subject on Jeopardy!, the popular syndicated television game show. In each episode, three contestants face six different categories of five clues each during the Jeopardy round, and again during the more challenging Double Jeopardy round.

On the April 15 episode, "Stamps" was named as the category for the important Final Jeopardy segment, where contestants are served up a single clue and can wager some or all of the winnings they’ve accumulated during the course of the game.

The clues revealed during the game offer statements of fact, and contestants vie to respond in the form of a question that fits the given clue.

The show’s longtime host, Alex Trebek, remarked on the topic before reading the final clue.

"I can’t recall ever having ‘Stamps’ as the subject for Final Jeopardy," he said.

He then read the clue: "Living people are rarely seen on a stamp, but in July 1945 the United States Postal Service issued one depicting this military event."

As usual, the contestants had 30 seconds to compose the correct Final Jeopardy question.

The first contestant called upon to read her answer was Megan McCloud of Ottawa, Ontario, Canada, who had started to write a correct response, but ran out of time before she could complete it, forfeiting her $3,800 wager.

Kevin Bohannon of Ann Arbor, Mich., was next to answer, and correctly responded with "What is raising the flag on Iwo Jima?"

The military event cited in the Final Jeopardy clue is the flag raising depicted on the stamp issued July 11, 1945 (Scott 929). Three of the six men who raised the U.S. flag atop Mount Suribachi during the Battle of Iwo Jima were still living when the 3¢ commemorative was issued.

Bohannon chose to wager nothing and maintained his $12,400 total.

James Holzhauer of Las Vegas, Nev., who has been on a record-breaking run as Jeopardy! champion, wagered $10,029 and responded correctly to win $45,444, increasing his eight-day win total to $460,479, and propelling him to second place in the show’s all-time ranking of highest winnings in regular season play.

Jeopardy! is now in its 35th season in syndication. The show, which won the 2017 Emmy Award for Outstanding Game Show, is produced by Sony Pictures Television.