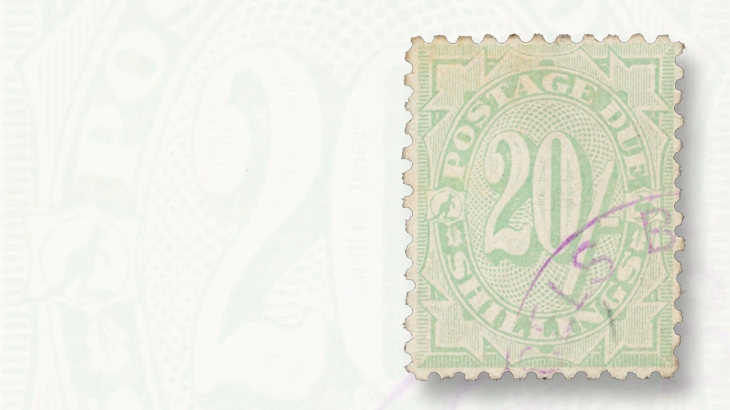 A Mossgreen auction last year offered this rare Australian 1902 20-shilling postage due stamp, which sold for the equivalent of US$29,600. The auction house located near Melbourne went into voluntary administration in December.

News outlets in Australia have reported that the Mossgreen auction house could face closure after an effort to restructure the firm failed.

Known to many as a fine art auction gallery, the firm based in the Melbourne area has also conducted stamp and postal history auctions since merging with established Australian philatelic auction firms over the past few years.

Mossgreen has described itself as Australia’s largest multi-department auction house.

Edmund Tadros reported in Financial Review, a news website affiliated with The Australian Financial Review Magazine, that the prominent auction house “collapsed” Jan. 17 with AUS$12 million in debts (more than US$9.6 million) against assets totaling AUS$2.8 million (US$2.24 million).

BDO Australia, an accountancy and advisory organization, announced Dec. 25, 2017, that it had been appointed as voluntary administrators to Mossgreen Pty Ltd.

Tadros reported that the auction firm’s CEO, Paul Sumner, also identified as a co-founder of Mossgreen, was among the 30 staff members “made redundant by administrator BDO.”

Writing Jan. 17 for Antiques Trade Gazette, Laura Chesters reported “Administrators at BDO said it will begin the process of an orderly wind-down of the business but it will also consider a sale of the firm and is seeking expressions of interest from potential buyers.”

Mossgreen handled the sale of the Arthur Gray collection of King George V issues in 2015 and has offered other significant Australian, British Commonwealth and worldwide philatelic material over the years.

Chesters reported that vendors who consigned material to Mossgreen “will be contacted and arrangements made for the return of their possessions.”

The firm still owes money to some 400 people and businesses, Chesters noted. The Mossgreen website became inaccessible as the mid-January reports about the firm were published.