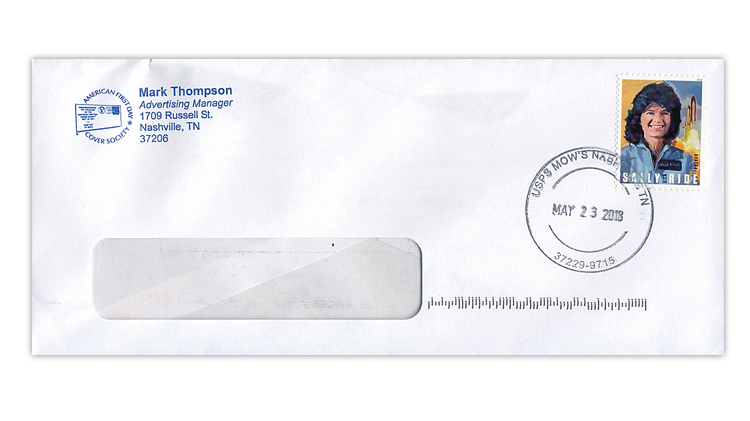 Yes, it’s a first-day cover, though it might not look like a traditional FDC. This unofficial first-day cover is postmarked on the issue date of the Sally Ride forever stamp, but in a different city than the one designated for official FDCs.

The April 29 issue of Linn’s Stamp News just landed on the presses and goes in the mail to subscribers Monday, April 15. And if you subscribe to Linn’s digital edition, you’re at the head of the line with early access Saturday, April 13. Here are three stories you'll want to check out.

Lloyd de Vries Poses the question in his First-day Covers column: How many “casual” FDCs do we miss because we aren’t paying attention?

This week, E. Rawolik VI reviews a mixture from Sovec (Pennsylvania). “I saw a name in the Linn’s classifieds that was new to me, and his advertisement sounded good. Sovec was offering foreign stamps with a total Scott catalog value of $250 for $21. The ad also said that the stamps were mostly older, from a 50-year collection that he was breaking up.” Read the review in this issue.