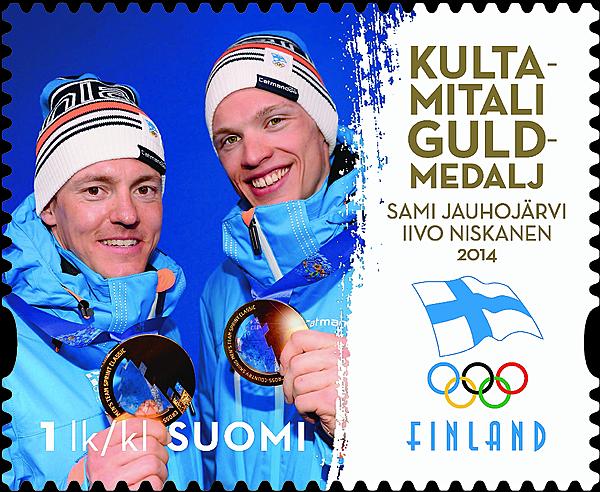 Inscribed in gold on the right side of the stamp design are the words “gold medal” in Finnish and Swedish followed by the athletes’ names. Below the inscriptions are images of Finland’s flag and the Olympic rings and the country name “Finland. The country name in Finnish (“Suomi”) and the first-class designation are on the left side of the design.

“I never would have believed I’d end up on a stamp,” Jauhojarvi said. “At the Olympic Village, I had a personalized stamp made of myself, but it is incredible to have an official stamp now. I’ll probably get recognized more often now.”

Niskanen said of the honor: “It feels incredible to get my own stamp. The stamp makes one feel like an important person and part of sports history.”

Ari Lakaniemi and Susanna Rumpu designed the stamp. This self-adhesive stamp was produced in panes of 10, in the same format as Finland’s personalized stamps. A total of 250,000 were printed.