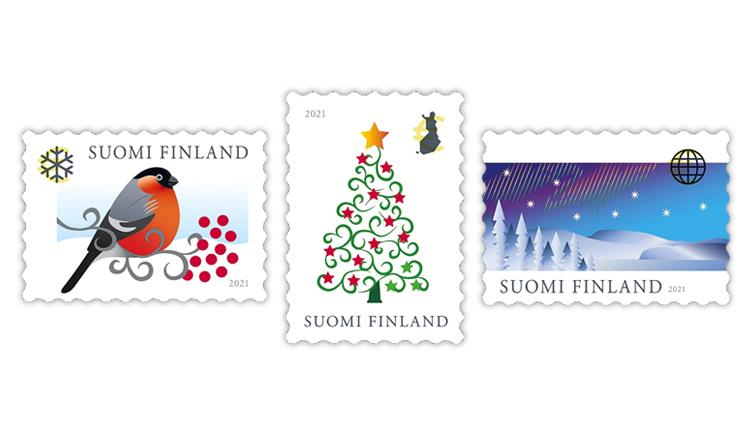 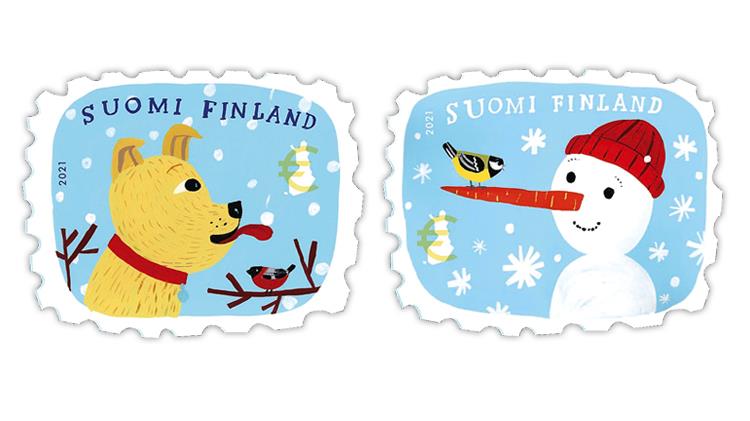 Finland also issued two stamps for generic winter greetings on Nov. 3. The designs show a dog catching a snowflake and a bird perched on the carrot nose of a snowman. These stamps are sold in a pane of 10 with five of each design.
Previous
Next

Finland’s post office, Posti, issued Christmas stamps on Nov. 3 and also issued stamps suitable for winter gatherings outside of the holiday on the same date.

Residents of Finland have been sending Christmas greetings since the early 1800s, and the country first issued a specific Christmas stamp in 1973 (Scott 539). In 2020, Finns sent almost 18 million traditional Christmas greetings, according to Posti.

Klaus Welp’s designs for the three new Christmas stamps portray a Eurasian bullfinch, a Christmas tree and the northern lights, respectively. For generic winter greetings, Matti Pikkujamsa designed a set of two stamps called First Snow. One stamp features a dog, and the other features a bird and snowman.

In Posti’s press release about the new stamps, Welp remarked on the challenge of presenting his subjects “simply but beautifully,” while trying to balance humor and warmth in his decorative forms.

In describing his First Snow stamps, Pikkujamsa said that “the cold can be warded off with closeness.”

“Many have warm memories of Christmas stamps already from their childhood,” said Tommi Kantola, Posti’s design manager. “Despite the modern twist, we wanted the stamps to retain a warm visual narrative and message. By going through quite a number of drafts, we were able to find a style that works for the stamps.”

All of the stamps are nondenominated, paying various rates. The Eurasian Bullfinch stamp is for the special domestic Christmas card rate (currently €1.30). The Spruce (Christmas tree) stamp and the two First Snow stamps are for the regular domestic letter rate (€1.85). The Northern Lights stamp pays the international rate (€1.95).

The Eurasian Bullfinch stamp was issued in panes of 20, and the other stamps are in panes of 10. The First Snow pane of 10 includes two of each design.

All of the stamps are available for purchase on Posti’s online shop.